As Thanksgiving is right around the corner, it seems an appropriate time to reflect on Wild Turkeys, the habitats they call home and how we can help conserve them. The United States is home to one species of Wild Turkey (Meleagris gallopavo), which is made up of five different subspecies. While these subspecies generally appear similar – the males all strut, gobble, and fan their large tail feathers – each subspecies has subtle differences, including different habitat requirements.

For example, Colorado is home to two subspecies of Wild Turkey, Merriam’s Turkey and the Rio Grande Turkey. Rio Grande Turkeys prefer the drainages, riparian areas, and brushy parts of the Eastern plains. They can be found foraging and taking cover among cottonwoods in riparian areas and in mesquite and scrub oak near the plains. In the evenings, an entire flock can be found nesting together in a single tree or spread out among two or three trees, in order to avoid predators on the ground.

Merriam’s Turkeys can be found wandering the forests of the Rocky Mountains at elevations of 3,500 to 10,000 feet. They move up and down in elevation depending on season and food availability. In the winter when heavy snows begin falling they move to lower elevations with lighter snow depths to more easily find food, and in the spring when the snow begins to melt they move back up into higher elevations. They prefer wooded areas that are interspersed with open meadows, so that they can keep an eye out for predators while foraging for food. They often prefer to roost in tall trees growing on a hillside, as it’s easier for them to start uphill and fly a shorter distance, straight into the tree. 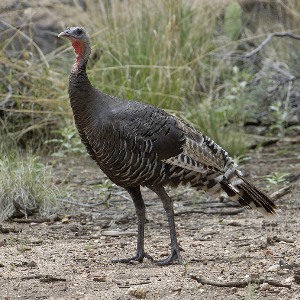 A Merriam’s Turkey. Note more white than black barring on the wings. Photo by Bill Schmoker. 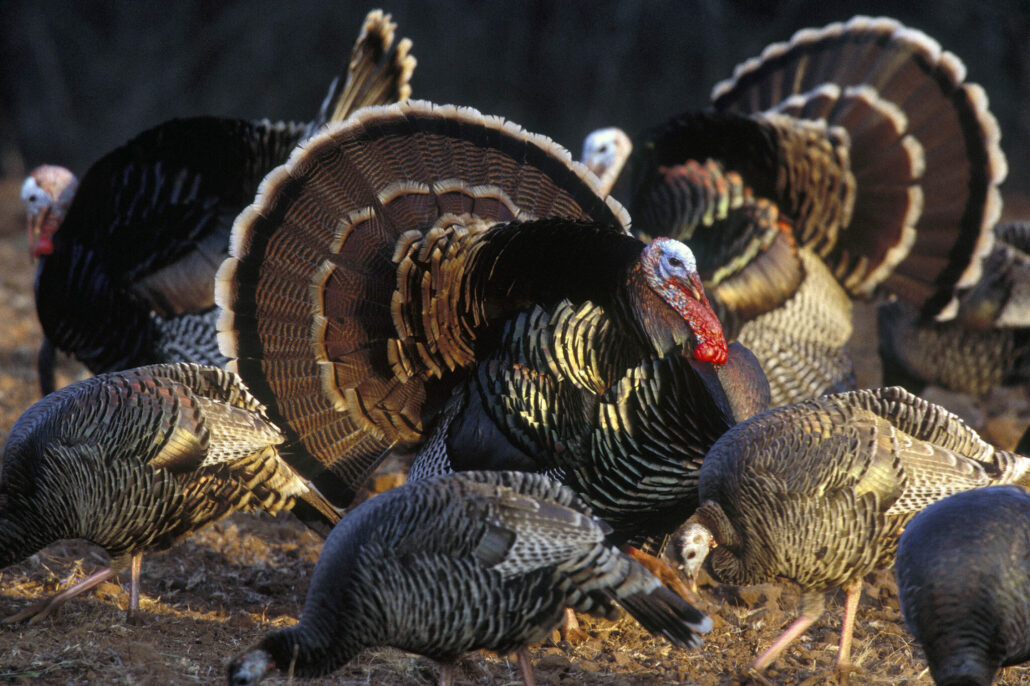 Wild Turkeys can be found in all of the lower 48 states, but in the early 1900s this was not the case. Turkey populations across the country were nearly depleted due to poaching and habitat loss. They were viewed as an unlimited resource, until conservationists began to take note of the birds’ declining populations and stepped in to rescue them from the brink of extinction. Hunting regulations such as a limited hunting season and bag limits were put in place and enforced, and protected areas were created to preserve their habitats. Much turkey habitat had previously been lost due to logging, but once loggers moved on, the forests began to regrow and the turkeys returned. In Colorado, as in several other states with populations that are still declining, conservationists began to trap birds in areas with robust populations and relocate them to areas where the birds had been extirpated but the habitat had since been restored, successfully repopulating areas throughout the U.S. The rebound of Wild Turkey populations across the country is one of North America’s greatest conservation success stories.

A rafter of turkeys feeding under a group of Gambel Oaks, within a few yards of a healthy riparian area along a creek. Photo by Kaitlyn Nafziger.

Unfortunately, we are beginning to see a slight decline in Wild Turkey populations again today. Scientists are studying the extent of the decline and its causes. One theory is that a reduction in available habitat, especially brood habitat (areas where turkeys successfully nest and raise their young) is a leading cause of the declines. Unfortunately, as we explored in a previous blog post, many of Colorado’s forests have shifted from their historic conditions due to fire suppression. This has led to significant changes in turkey habitat. Ponderosa pine forests were historically less dense, with canopy gaps varying in size, allowing for diverse understory vegetation including native grasses, forbs, and shrubs. Wild Turkeys depend on these open forest conditions and meadow edges to safely forage for food. Riparian habitats have also become degraded by invading Tamarisk, a plant that grows in dense patches and decreases forage diversity and availability, as well as visibility for foraging turkeys. 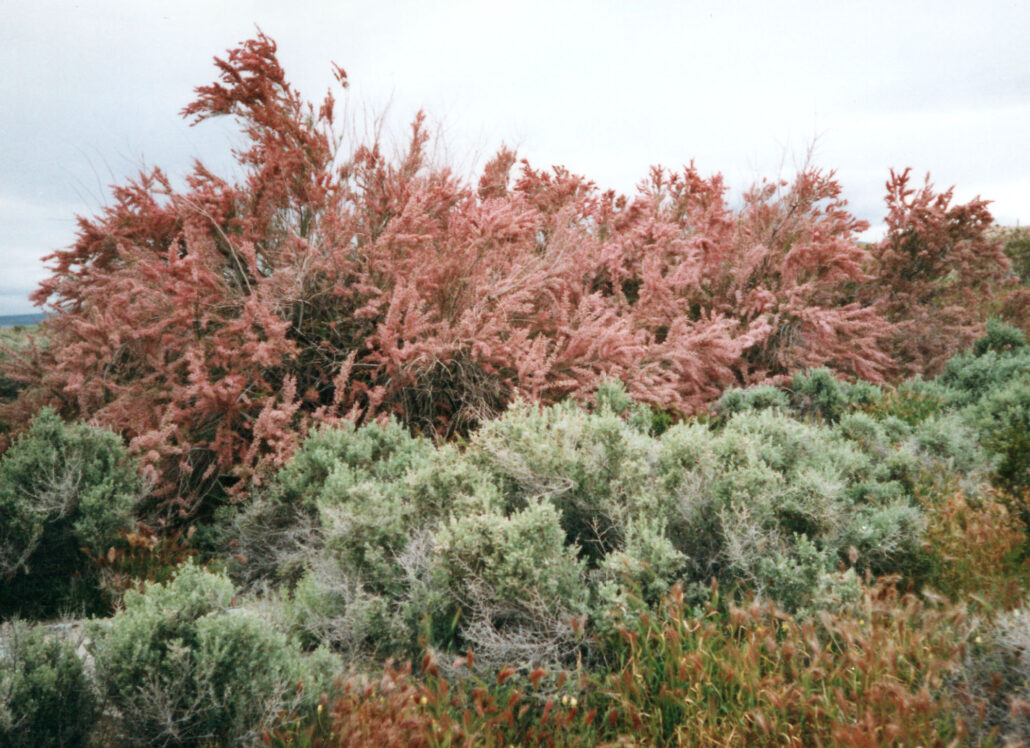 Bird Conservancy of the Rockies’ Private Lands Wildlife Biologists (PLWB) work with private landowners on forest restoration projects to improve habitat for Wild Turkeys as well as other forest inhabitants, such as Lewis’s Woodpeckers and Mountain Bluebirds. By recreating historic forest conditions, we can improve the amount and quality of forage for turkeys as well as allowing them to keep better watch of their surroundings for potential predators. Brush piles constructed around the base of a tree can increase available nesting habitat when placed within a half mile of a water source. Biologists on the plains also work with landowners to improve riparian habitat by removing invasive species to encourage native species, such as willows and cottonwoods, to regrow.

Examples of open meadows in a healthy ponderosa pine forest, where native grasses and forbs have regrown, providing good habitat for wildlife. Photos by Kaitlyn Nafziger.

Much of the work that is done by our PLWBs is supported by the Natural Resources Conservation Service through funding from the Farm Bill.  In addition, state wildlife agencies across the West receive funding through sources such as the Pittman-Robertson Act and money collected from hunting licenses and park visitor fees to help manage wildlife populations. For example, this funding is what allowed Colorado Parks and Wildlife to start a Wild Turkey reintroduction program back in the 1980s. The program was so successful that CPW has been able to increase hunting licenses and manage turkey populations in areas where the birds have become overabundant, and use the extra funds generated by the licenses to try to boost turkey populations in other areas. 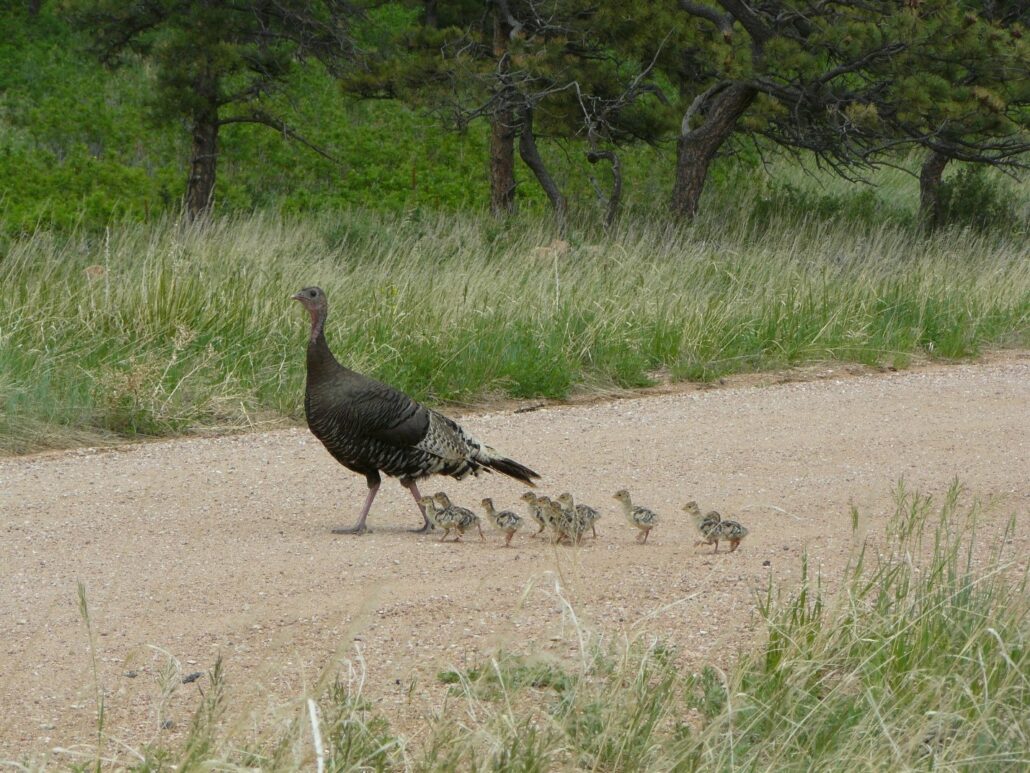 A Merriam’s Turkey hen with her brood of chicks crossing a road at the US Air Force Academy. Photo by Melissa Whitingslow, USFWS.

This Thanksgiving we are thankful for all of the private landowners and partners who have worked with us to improve wildlife habitat on their properties for not only their benefit, but for the benefit of their local communities and everyone who enjoys wildlife viewing as well!

Kaitlyn Nafziger (based in Cañon City, CO) is Private Lands Wildlife Biologist at Bird Conservancy of the Rockies with funding support from the USDA Natural Resources Conservation Service and Colorado Parks & Wildlife.