This is Part 1 of a 3-Part series exploring modern wildfires, their effects on wildlife, and management solutions underway by Bird Conservancy of the Rockies and our partners.

The forests of the American West have long been sculpted by fire. The history of fire is reflected in the adaptations of many native plants and animals. It is difficult to miss recent news that fires have become larger and more intense in recent years, but the reality is that these changes began over a century ago. Modern human expansion and land management practices often suppress natural fires, and in the absence of natural fire, forest conditions have been changing. Modern “megafires” are largely a result of these changes. Many forests in today’s West contain less-than-ideal wildlife habitat, both before and after megafires occur. To appreciate these trends, we need an understanding of how modern forests differ from historical forests.

When you walk into a forest, it may seem still. In reality, forests are incredibly dynamic – there is a constant ebb and flow of disturbance and regeneration. Disturbance comes in many forms, including fire, insects, wind, ice, drought, and disease. These events cause some plants to die, which creates an opportunity for new ones to replace them. Each forest has a disturbance regime, with its own specific frequency and extent of disturbance occurrences. Scientists determine the historical disturbance regimes of forests through analyses of tree rings, soil cores, historical accounts, and other data. 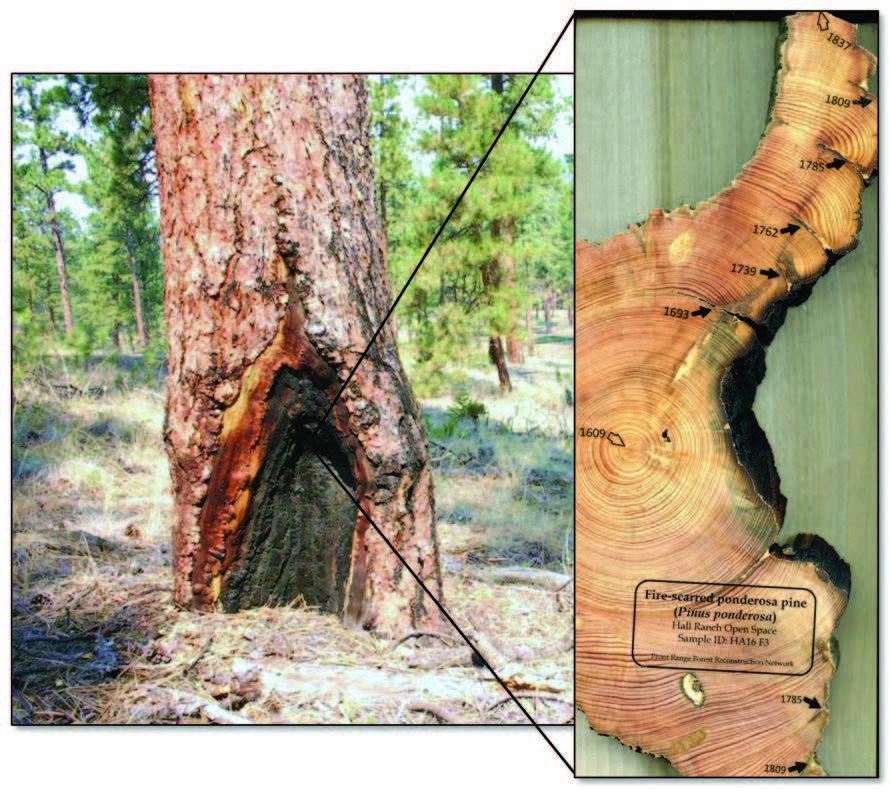 An Example of Historical Fire

On Colorado’s Front Range, where dry conifer forests abut the state’s largest metropolitan areas, forests are estimated to have historically burned as frequently as every 1-35 years. These fires occurred often enough that they maintained open forests with far fewer trees than today. As a result, fires mostly burned the plants on the ground, rarely reaching the forest canopy. The forests were dominated by ponderosa pines, which have thick, fire resistant bark.

The intensity and frequency of fire depends on many factors such as moisture, elevation, sun exposure, soil type, and weather conditions. Since the intensity of a fire can differ even within a small area, forests were mosaics, with different-sized patches of trees and openings interspersed like a patchwork quilt. This disturbance regime is common across most dry conifer forests. Other forest types had different disturbance regimes, but many in the West were primarily defined by fire. Many higher elevation, moist forests burned less frequently, and therefore at higher intensities. 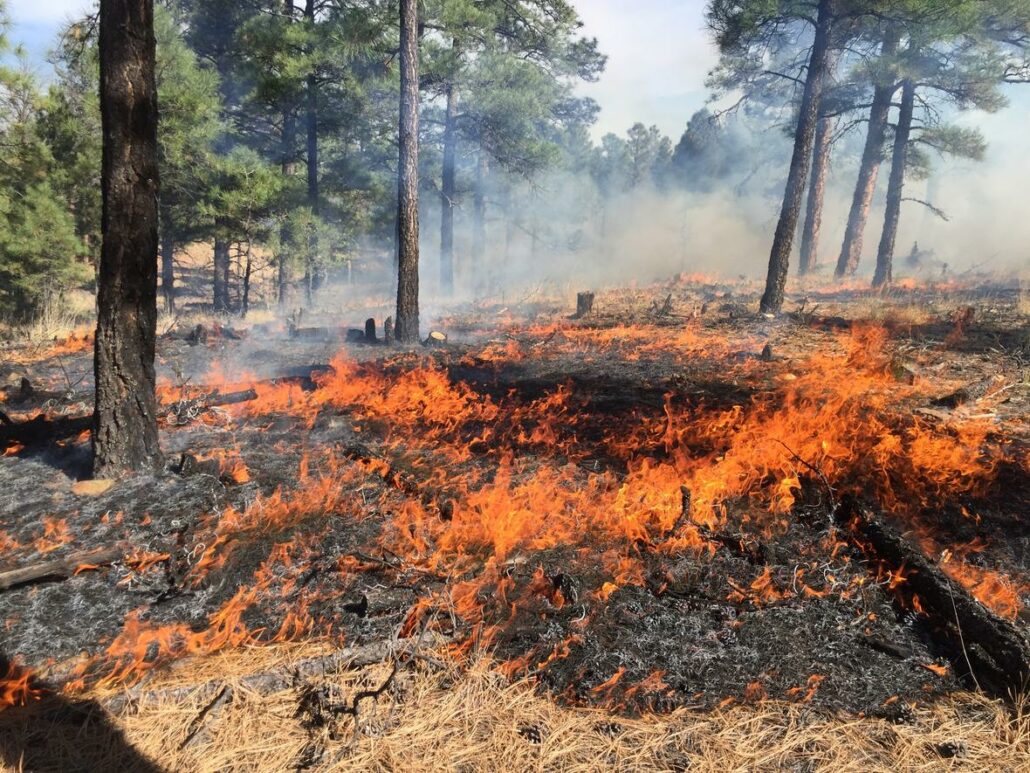 A low-severity fire representative of historical fire in many dry conifer forests, such as those found along Colorado’s Front Range.

The complexity of a forest mosaic is beneficial for wildlife, as it provides a diversity of habitat types in close proximity to each other. Lone trees, clumps of trees and treeless openings of varying sizes and shapes intermingle, representing different ages and species of plants. Openings permit light and water to reach the forest floor, allowing the understory plants – grasses, wildflowers, and shrubs – to thrive. 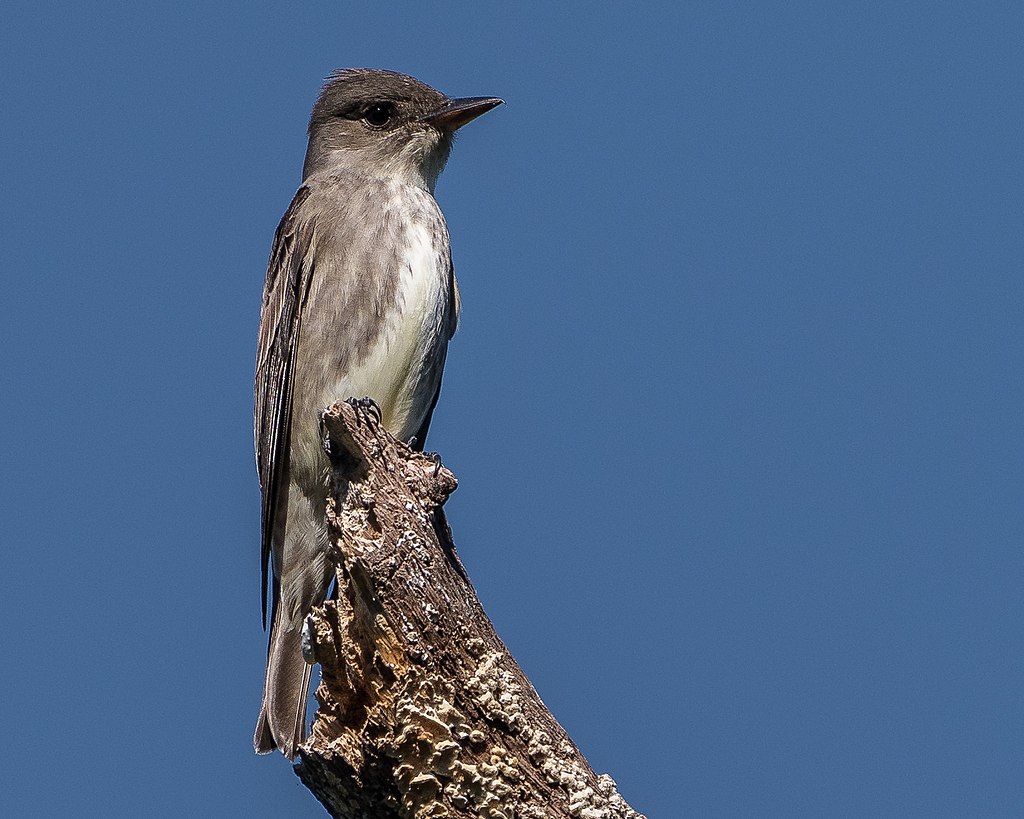 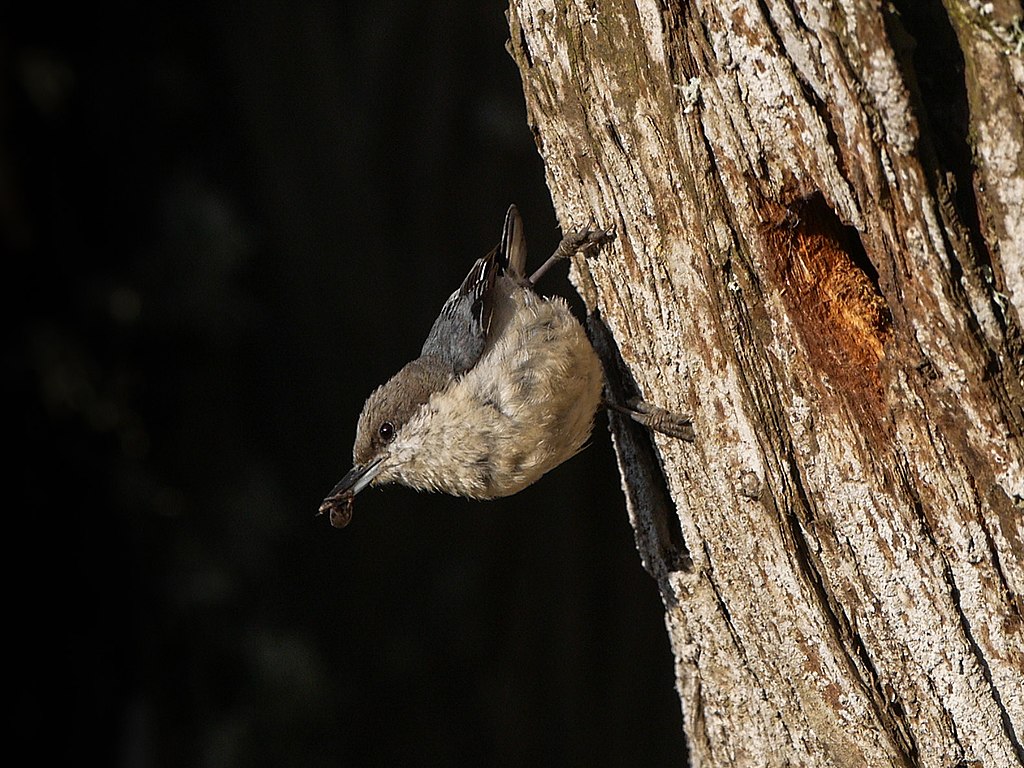 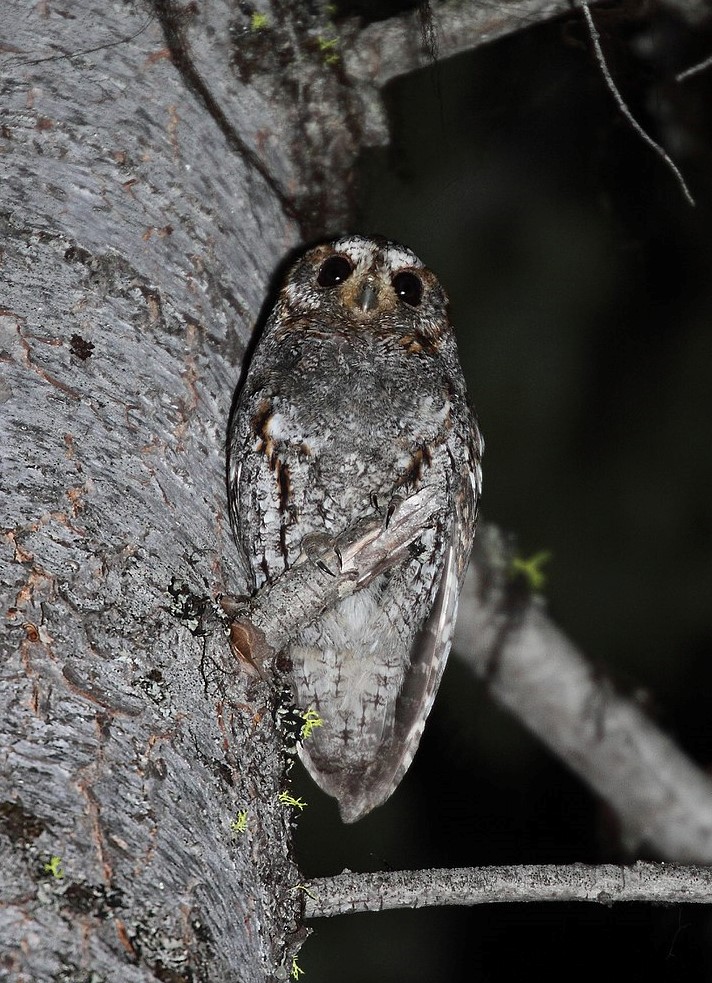 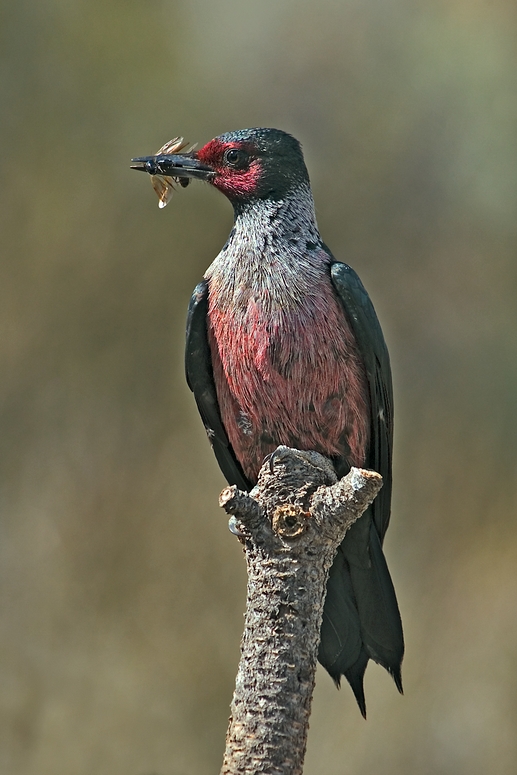 Understory plants are crucial in providing both food and cover to bird species and their prey, such as insects and small mammals. Clumps of trees with interlocking branches provide cover for hiding and nesting. Lone trees can grow very large, producing substantial quantities of seeds for seed-eating species and perching space for many birds, ranging from nuthatches to owls. Standing dead trees provide insect prey for woodpeckers, and the cavities that foraging woodpeckers create are in turn relied on by many bird species for nesting, such as mountain bluebirds. When many of these features are present in a forest, many wildlife species can call it home – we call this biodiversity. 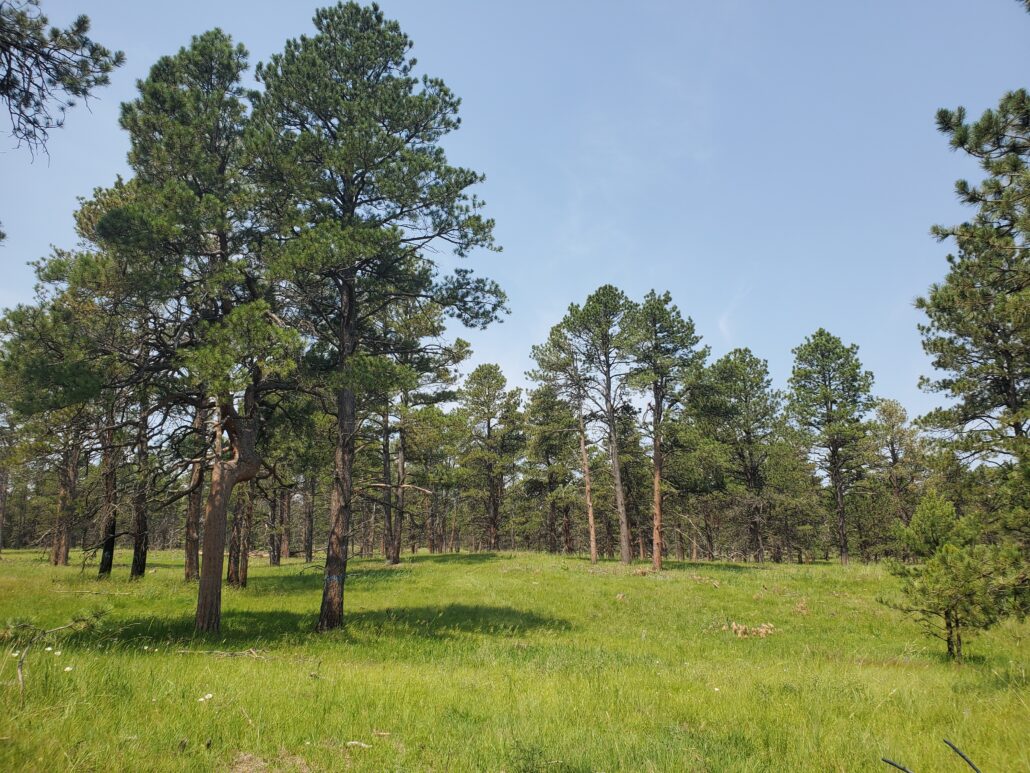 A recently restored ponderosa pine woodland on a ranch along Colorado’s Front Range. Bird Conservancy of the Rockies biologists planned the restoration project in collaboration with the rancher, the Natural Resources Conservation Service, Colorado Parks and Wildlife, and Audubon of the Rockies. Photo by Dave McNitt.

The Modern Era of Fire Suppression

As Europeans colonized the West, they increasingly suppressed natural fires– when a fire started it was extinguished almost immediately. Fire was largely removed from the disturbance regime of western forests and the ancient equation was altered. In the absence of fire, trees filled in the grassy openings and other available gaps. This has continued over decades, with trees becoming tightly packed and growing to uniform small size, limited by competition. Plant species that are not fire tolerant, like spruce and firs, have spread into areas where they would not have historically grown. In their competition for light, trees have shaded out many understory plants, leaving bare ground and thick mats of dead needles. These changes in forest conditions, driven by changing land management and use, have been a driver of biodiversity loss and overall ecosystem degradation. Moreover, the buildup of woody fuel across millions of acres of forests combined with a warming, drying western climate has had the most obvious repercussions for many of us – the modern megafire.

Paired historical and current photographs of the Cheesman Reservoir landscape showing the increased density of trees, loss of openings, and reduced mosaic that occurred from 1896 (left) to 2000 (right). This same area burned severely during the 2002 Hayman Fire. Left photo by Denver Water; right photo by M. Kaufmann, U.S. Forest Service.

Active forest management across both public and private lands is more important than ever to minimize negative impacts of these large disturbance events and bring balance back to the historic forest equation. From degraded wildlife habitat to extreme fire risk, the cost of doing nothing is too high – we must take an active role in restoring our forests.

Please stay tuned for the Part 2 & 3 of this blog, to learn more about the direct and indirect impacts of catastrophic wildfires and what Bird Conservancy of the Rockies is doing to address this need for forest management.

David McNitt (based in Woodland Park, CO) is employed by Bird Conservancy of the Rockies with funding support from the USDA Natural Resources Conservation Service and Colorado Parks and Wildlife.