The Bird Conservancy of the Rockies’ social media posting on August 31 grabbed my attention. Featuring a close up of a Black Swift in hand, the accompanying post announced that the Black Swift Research Team had recently caught three Black Swifts, all of which had been banded 17 years ago in 2005 as adults, breaking the longevity record of oldest known for the species. My heart nearly stopped. I quickly messaged Rob Sparks, the Black Swift Research Team Leader at Bird Conservancy of the Rockies to determine the location where the bird had been banded, the date of the banding and who the bander was. The site was Zapata Falls, the date was August 18, 2005 and the bander was Kim Potter. 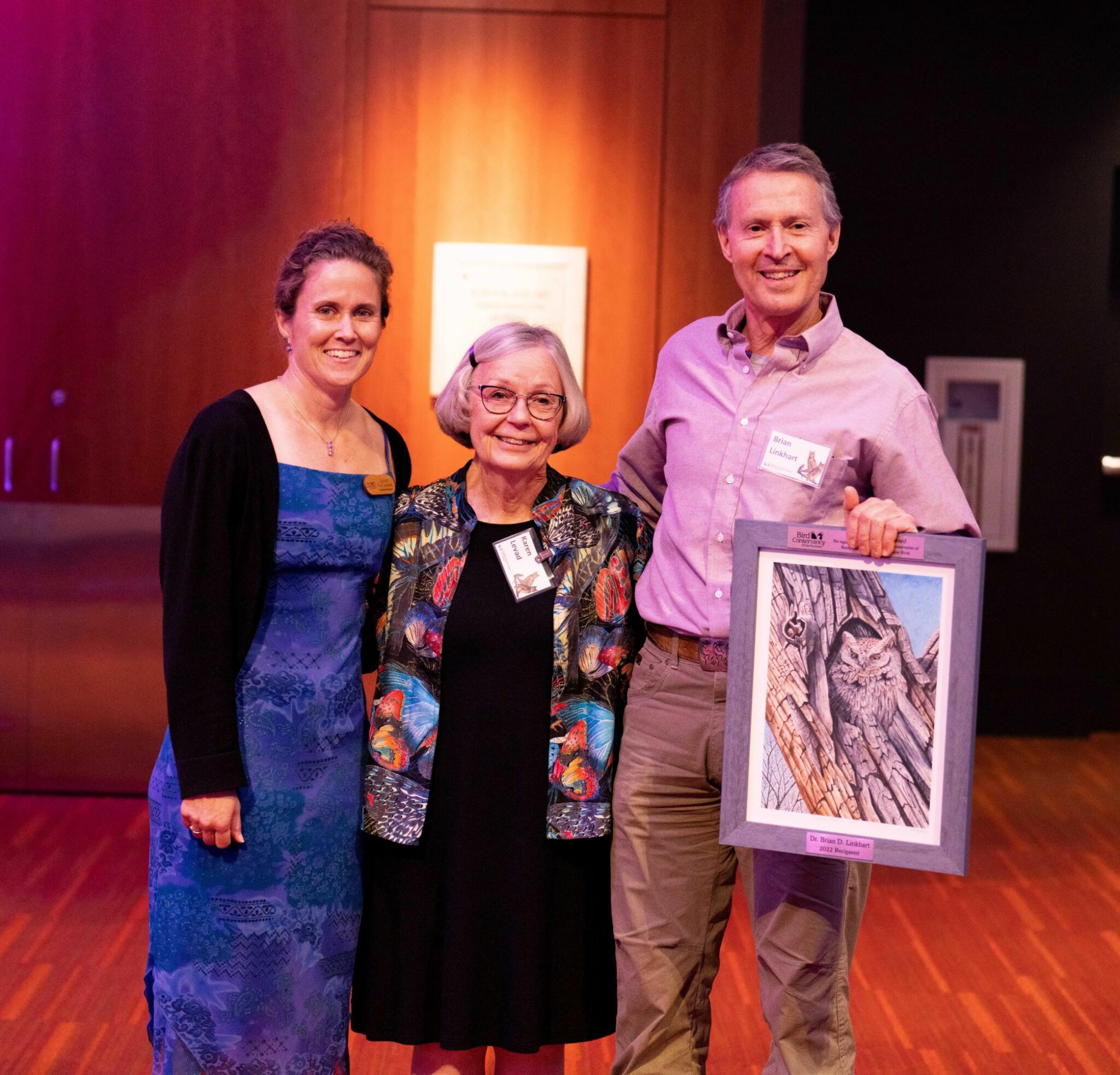 My name is Karen Levad and I’m not a birder.  But I was married to a birder—Rich Levad—and boy, was that ever a lucky turn of events! In our 42 years together, I had the amazing opportunity to be a “fly on the wall,” meeting all sorts of people who shared Rich’s passion for naming, observing, listing and tracking the more than 400 avian species that call Colorado home. His keen interest, insatiable curiosity, and love of the outdoors led eventually to a position with, then, Rocky Mountain Bird Observatory where he served as special species coordinator for eight years. In that position he monitored birds not easily tracked by conventional means. Owls, grebes, herons all fell under that category. So, did Black Swift, a bird that Rich soon regarded as “the coolest bird.”

All About Birds provides this description of the Black Swift: “[It} dances high in the sky on sickle-shaped wings, where it feasts on winged ants. On sunny days it flies so high that it’s just a speck.”

Rich introduced me to Black Swifts by having the good sense to take me to Box Canyon Inn in Ouray, CO where we gazed skyward in the comfort of a spring-fed hot tub. There, he pointed out the dancing black specks, and I was hooked.   I soon learned that the birds nest behind waterfalls on steep ledges where sometime in June the female lays one egg. The male and female take on joint custody of the hatchling, nurturing their offspring until mid-September then head to western Brazil. They will winter there until the following May, when they usually head back to the same breeding site.

Colorado’s mountainous terrain provides ideal nesting sites with numerous waterfalls available to give the birds consistent locations to raise their young. After the egg hatches, the adults, just at dawn, leave the youngster on the secret and protected ledge. They spend the day foraging for flying insects returning at dusk to feed their offspring and rest from a day’s hard work. Over the last twenty years, the Black Swifts’ consistent behavior and faithfulness to location make it possible to monitor Zapata Falls. 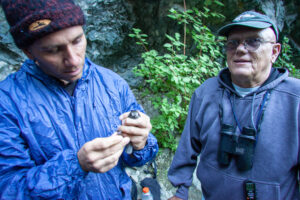 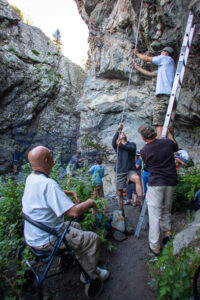 Rich, watching the construction of the mist net

Rich, getting ready for the adventure

Located near the base of the Sangre de Cristo Mountains, Zapata Falls is a secluded 25-foot waterfall sheltered in a rocky crevasse. In The Coolest Bird: A Natural History of the Black Swift and Those Who Have Pursued It, Rich tells of the early monitoring efforts at Zapata:

“The 2004 field season…marked the beginning of an increased Black Swift banding effort [when] I visited Zapata Falls in the company of Kalen, Josiah, Micah, and Joshua Malueg, four young bird enthusiasts [living in the San Luis Valley]. Somewhat astonished, we counted 25 swifts entering the falls between 7:15 p.m. and 8:30 p.m. As the swifts flew into the slot canyon leading to the waterfall, many zipped past us at heights of only 6 to 10 feet making it an ideal site for banding.

On the evening of August 26, 2004, a contingent of RMBO staff and volunteers erected a mist net at the entrance of the slot canyon.  One 12-meter mist net reached easily across the mouth of the box canyon. [Within 10 minutes of setting up the net] a female attempted to leave the canyon at a low trajectory, hit the top trammel, and dropped helplessly into the baggy net. Jason Beason, our designated bander, applied the US Fish and Wildlife aluminum band, measured the wing and tail length, checked for molt and fat and determined the bird’s age and sex. In the next hour and a half, we caught, measured, weighed and banded four more swifts.”

This story is going to take a slight detour here as I tell about what else was happening in Rich’s life. In the fall of 2004, a slight weakness in his thumbs and spasms in his muscles lead to a diagnosis of Amyotrophic Lateral Sclerosis (ALS), that awful, debilitating disease known more commonly as Lou Gehrig’s Disease.  Even as his body weakened he continued through the summer of 2005 to work for RMBO thanks to our daughter Amy who became his number one volunteer field assistant. By then, Rich was using a walker to get around and soon would be utilizing a wheel chair.

Nevertheless, monitoring continued and the Second Annual Zapata Falls Black Swift banding event was scheduled for August 18, 2005. Eighteen people committed to the event with Kim Potter assigned the duties of banding. Others were responsible for getting the mist nets up. For this event, there was also the “Men In Black crew—Todd Patrick, Glenn Giroir, Bill Day and Randy Ghormley—who provided the much needed assistance to get Rich up and then down the steep 1/2 mile trail that led to the falls.

“In 2005 a party of 18, which including the four Malueg boys, John Stanek, Jason Beason, Kim Potter, several birders and agency biologists from the San Luis Valley returned on the evening of August 18 for the Second Annual Zapata Falls Black Swift banding. By dark we had captured seven swifts, one of which wore a band from 2004.  Altogether, 11 Black Swifts were banded that day: 7 adults and 3 nestlings.”

Rich predicted, “…the success of the mist netting experience in 2004 suggested that [Zapata Falls] had potential for a long-term study of return rates, longevity and productivity.” 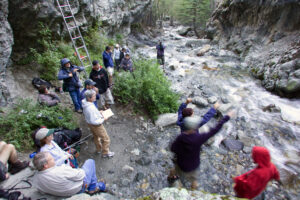 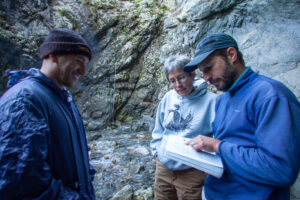 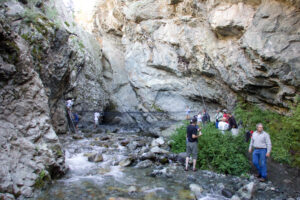 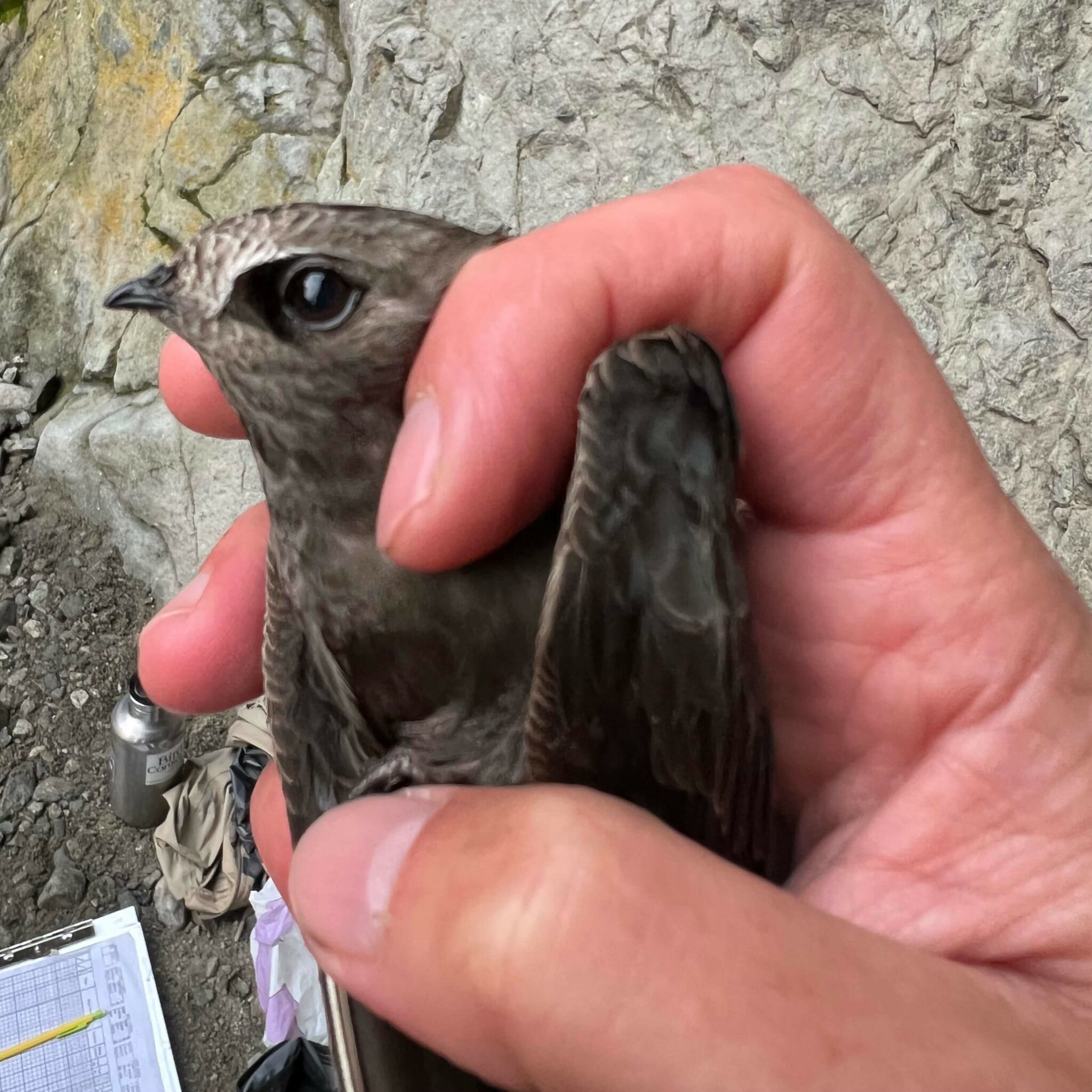 Photo used for the social media post about breaking the longetivity record.

We return now to August 2022 when Bird Conservancy posted this report on social media:

Exciting news from the field!  The Black Swift Research Team which includes fellow Bird Conservancy staff caught not one, but three Black Swifts at a site in Colorado which broke the longevity record for the species of being at least 18 years old.

Bird Conservancy of the Rockies and partners are committed to continuing the monitoring started over 20 years ago building on the foundation that Rich laid. Historically Bird Conservancy and partners have inventoried over 350 Black Swift sites in Colorado and confirmed historical breeding or presence at 116 of those sites.

Global Warming and the Black Swift’s dependence on waterfalls for nesting makes the future for these birds very bleak.  In 2021, Rob Sparks reported, “The species has experienced range-wide population declines in the US and Canada of up to 94%, according to Breeding Bird Survey (BBS) data and the Partners in Flight 2016 Landbird Conservation Plan.”  His conclusion:  Black Swift are “therefore in desperate need of mitigating threats and recovering populations.”

Research continues as the Black Swift Research Team works to learn more about these mysterious, magical and wonderful birds. The 18-year-old Black Swift that they recaptured attests to the strength and resilience of this amazing species.

To learn more tune into our next webinar presented by Black Swift Research Team leader Rob Sparks. Rob will be presenting on the movement ecology research and findings from the latest paper. Follow this LINK to register.

Curious how the Black Swift Research Team captures Black Swifts to study them in these remote locations? Check out this VIDEO of Rob Sparks and team constructing a double stacked mist net at Zapata Falls.

The Richard G. Levad Award honors the memory and work that Rich provided for Bird Conservancy. Each year, the award is presented to a person who, like Rich, has provided distinguished service to the ornithological community, made scholarly contributions to the field of ornithology and/or has enthused others about conserving birds and their habitats through sharing his or her personal knowledge and experience..

All photos by Todd Patrick unless stated. Thank you Todd for providing photos from this great adventure 17 years ago. Thank you Karen for writing this story and being a supporter of Bird Conservancy for all these years.