The Richard G. Levad Award honors the memory and work of Rich Levad who, after retiring from teaching, turned his lifelong love of birds into a second career with Bird Conservancy of the Rockies (then Rocky Mountain Bird Observatory/RMBO). Each year, the award is presented to a person who, like Rich, has provided distinguished service to the ornithological community, made scholarly contributions to the field of ornithology and/or has enthused others about conserving birds and their habitats through sharing his or her personal knowledge and experience..

After retiring and beginning his second career with RMBO to Monitor Colorado Birds, Rich’s assignment was to monitor special species, which gave him the opportunity to develop approaches for birds not always under a researcher’s watchful eye. Rich was a thinker, a teacher and a collaborator and he had a way of engaging all kinds of folks in his efforts to learn more about the birds that he loved. 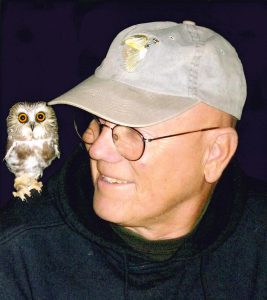 Some of Rich’s accomplishments included:

The Rich Levad award was initiated to honor these and other contributions to science and especially Rich’s unique way of sharing his knowledge and enthusiasm to engage others.

Rich died of Lou Gehrig’s Disease in February 2008. In his final days, Rich and his family worked to establish the Richard G. Levad Memorial Fund at Bird Conservancy of the Rockies (then Rocky Mountain Bird Observatory). This fund is dedicated to continuing special species research efforts initiated by Rich. For more information about how to contribute to this fund, visit our donation page.  Be sure to indicate your donation is dedicated to the Richard G. Levad Memorial Fund in the appropriate box.

Click the link above to submit an online nomination