By Bird Conservancy of the RockiesNovember 25, 2015Education

“I had an EPIC day!!” -5th grade student that attended the banding station at Barr Lake

We would have to agree, the 2015 fall migratory season at Bird Conservancy of the Rockies’ Barr Lake Banding Station was “epic” for both birds and kids.

Over 1,400 birds were banded this season and 64 species recorded. Highlights of some of the more rare species we had this season were:

In addition, the station also banded species that are common to see at Barr Lake, but rare to catch in the mist-nets. The five Red-shafted Northern Flickers caught in a single net run, 10 Red-winged Blackbirds, a Common Grackle, Mourning Dove and Black-billed Magpie were all incredible to see up-close in the hand.

Wilson’s Warbler, the most common species typically banded at Barr Lake, also did not disappoint this year with 602 individuals banded. All of the data recorded from any of the Bird Conservancy’s banding stations is reported to the USGS Bird Banding Lab. Compiled data from banding stations across North and Central America has allowed biologists to gain a better understanding of avian biology, such as the biodiversity of an area, migratory patterns, life cycle information (such as molting patterns, breeding, and survival), and individual site fidelity.

Not only are Bird Conservancy banding stations an integral part of avian conservation, but they are key in fulfilling one of our main education goals, which is to engage people in nature and the scientific process. Student looks on as Meredith McBurney talks about the Townsends Warbler. Photo by Peggy Watson

Nearly 1,400 students and over 400 adults visited the Barr Lake Banding Station this season. Experiences varied from preschoolers taking their first ever field trip on a bus to our banding station to ornithology students from nearby universities beefing up their identification skills.

When asked to reflect on their experience, teachers and parents stated: “This helped my students get excited about birds and learning about nature. Several of them talked about wanting to return to Barr Lake for fun in the future, and one kiddo insisted repeatedly that when he grows up he wants to be a bird bander!”

“This was amazing! The level of rigor and the openness for student question and wondering was really at the level we were hoping for our students. The staff were great instructors and had great interactions with the kids. Thank you”

“The children LOVED the whole experience. Getting to see the birds up close and watch the banding firsthand was fascinating! They have talked non-stop about it since coming home from the program. Several went home and “banded” their bird stuffed animals and talked about their “migration” to other family members.”

Many of these schools would have been unable to participate if it was not for the wonderful support of Ed Warner, Adams County Open Space, Science Cultural and Facilities District, Science and Cultural Collaborative and the Urban Bird Treaty. These generous donors provided funding to help cover program fees and bus transportation. Many thanks also go out to our volunteers and Barr Lake State Park for helping make this wonderful season possible. 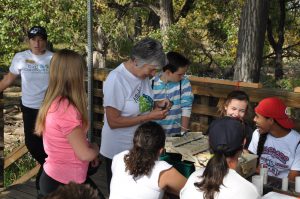 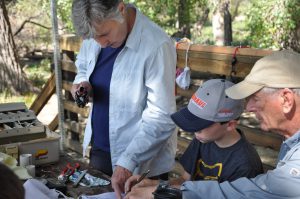 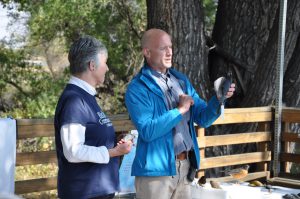 Bander Meredith McBurney and Denver Museum of Nature and Science’s Curator of Ornithology Garth Spellman broadcasted live from the banding station to over 300 students across the nation. Photo by Peggy Watson. 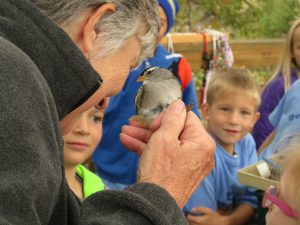 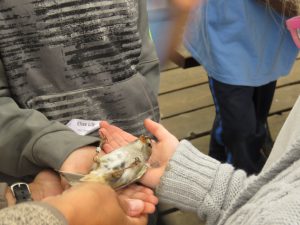