There and Back Again

By Bird Conservancy of the RockiesOctober 24, 2018Science

In the 111 years that have passed since Draper’s observation near Pike’s Peak, the habits of Brown-capped Rosy-Finches haven’t changed. They are still creatures of bald peaks and green vales, breeding at higher elevations than any other bird in the United States. Suitable breeding sites require several elements: steep cliffs for nest sites, snow fields and alpine tundra for foraging. Even this bird’s scientific name hasn’t been updated, surprising in an age when genetics is changing our understanding of species lineage. And, as Draper observed, they are still startlingly colorful—especially when viewed against their stark alpine habitat. 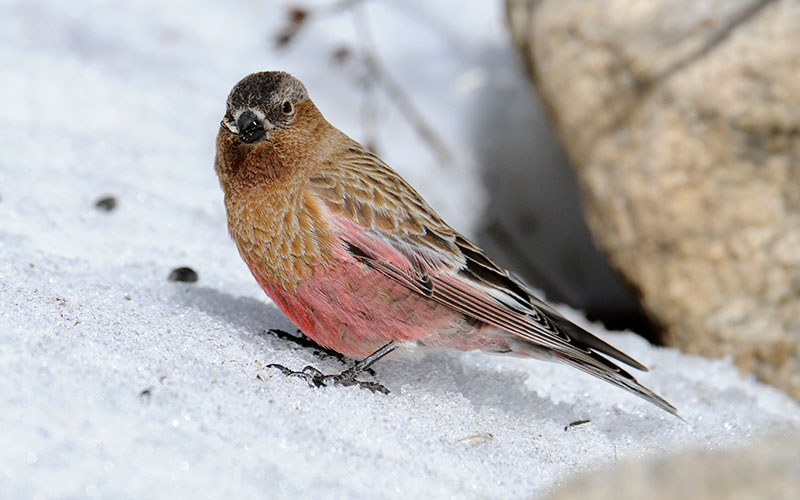 In Draper’s day, seeing a ‘swarm’ of Brown-capped Rosy-Finches (BCRFs) was possible, even likely, for those who looked in the right places. That’s no longer the case. Once abundant, their populations are diminished and scattered in small pockets of suitable habitat. Partners in Flight added the species to their Red List in 2016 because of low population size, large declines in their population, small range and vulnerability to climate change. Recent analyses suggest their populations have not declined dramatically since the 1970s but their population is still relatively small. In addition, their breeding range seems to be contracting.

In 2016, Bird Conservancy launched an effort to understand the reason for their low population size and diminishing range. A warming climate is certainly high on the list of concerns. Temperatures are averaging higher each year—with lower snowfall amounts—in the Rocky Mountains. This creates conditions and opportunities for other species, both native and introduced, to colonize at higher elevations. How are these species interacting with BCRFs? As with any ecosystem, even subtle changes can have big impacts. Science provides the foundation for determining what’s really happening with these birds, enabling us to develop conservation strategies that have the best hope of success. 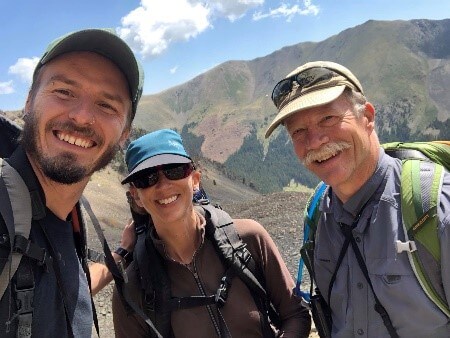 Bird Conservancy isn’t the only organization concerned about the plight of these birds. Recently, our Science Director Luke George joined Central New Mexico Audubon Society members Jill Wussow and Raymond VanBuskirk for a challenging, 12,000-foot elevation hike into the craggy peaks of Wheeler Peak Wilderness in search of Brown-capped Rosy Finches. Raymond, owner of Brant Nature Tours in Albuquerque, has studied rosy-finches in New Mexico since the early 2000s. His initial studies focused on wintering birds in the Sandia Mountains, where he and other volunteers have been banding birds since 2004. His long-term banding data are some of the best available on this seldom-studied species. Noting the lack of breeding observations of BCRFs in New Mexico, he began visiting historic breeding sites around the state in 2014, but as of 2017 had seen none. With snow cover and suitable alpine tundra declining in New Mexico, perhaps the breeding conditions were no longer suitable for BCRFs?

Preparing to search for BCRFs across New Mexico entailed reviewing eBird records and contacting ornithologists that had documented breeding rosy-finches in New Mexico in the 1970s, 80s, and 90s. Though BCRFs are commonly found in the Sangre de Cristo and Sandia Mountains in northern New Mexico in the winter, there were no eBird records for the birds during the breeding months (June-August). The last documented record of them breeding in the state was July of 1990. Luke, Raymond and Sandy Williams, secretary of the New Mexico Ornithological Society, used historic records in New Mexico to identify eleven sites where BCRFs had been observed during the breeding season. 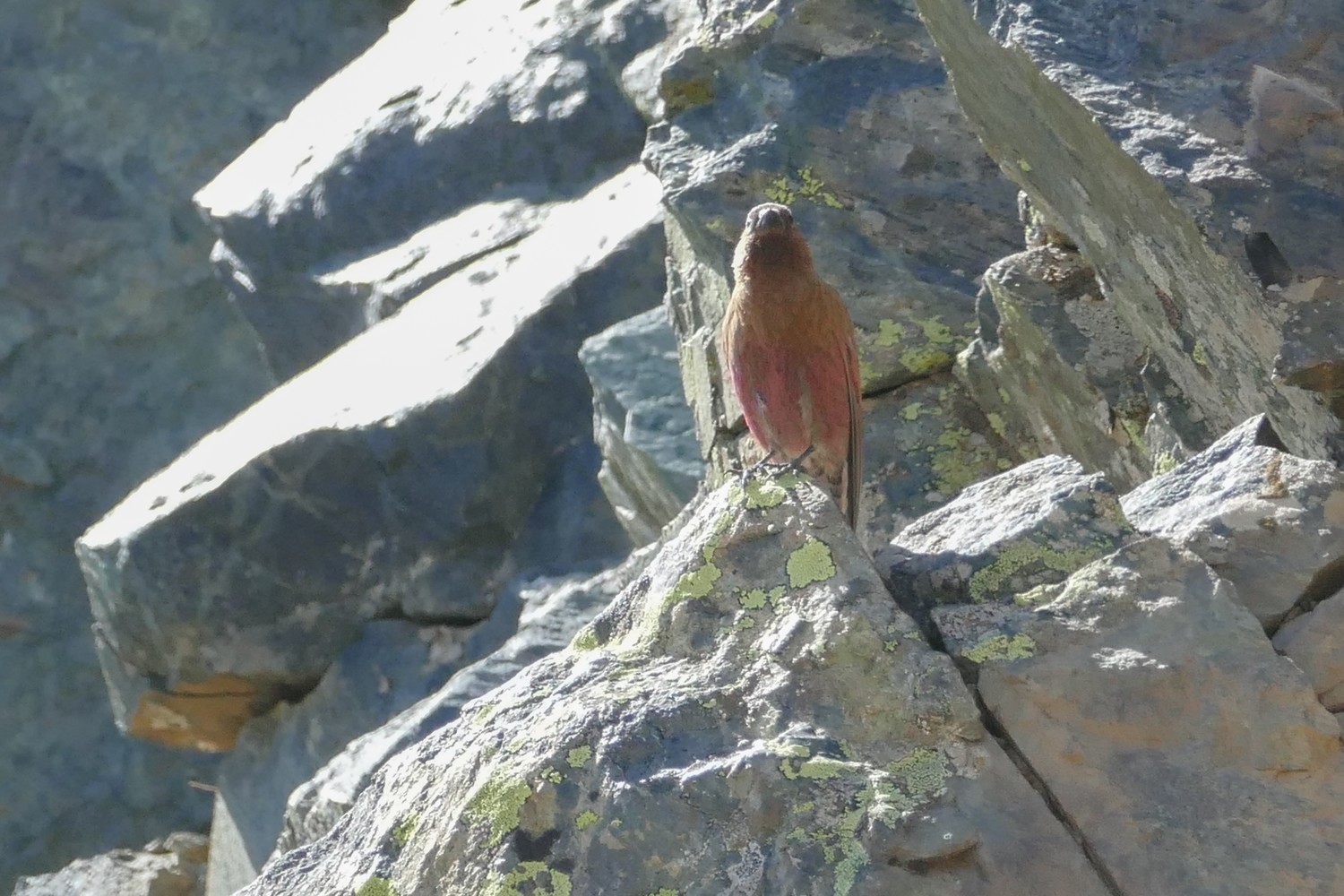 For the first time in New Mexico in nearly 30 years, a breeding Brown-capped Rosy-Finch is observed nesting! Photo by Raymond VanBuskirk

On June 13th Luke, Raymond and Jill set out on foot into the rugged Wheeler Peak Wilderness Area. They camped overnight near Williams Lake, and spent the next day scrambling around rocky bowls and crags in search of the birds. After several grueling hours above 12,000 feet, they were finally rewarded. A pair of BCRFs were spotted high on a snow field. When the male flew to a nest site in the crevice of a vertical cliff with nest material, there were high fives all around. The party had witnessed something not documented in New Mexico since 1990!

While significant, the celebration was tempered by the reminder there was only one breeding pair at the site. Although BCRFs are still present in New Mexico, all evidence suggests they are just barely hanging on. Luke, Raymond and others have now revisited six former New Mexico breeding sites and confirmed breeding at only two of them. Additional targeted surveys are planned in 2019—so stay tuned for more news about the Sirens of the Mountaintops! 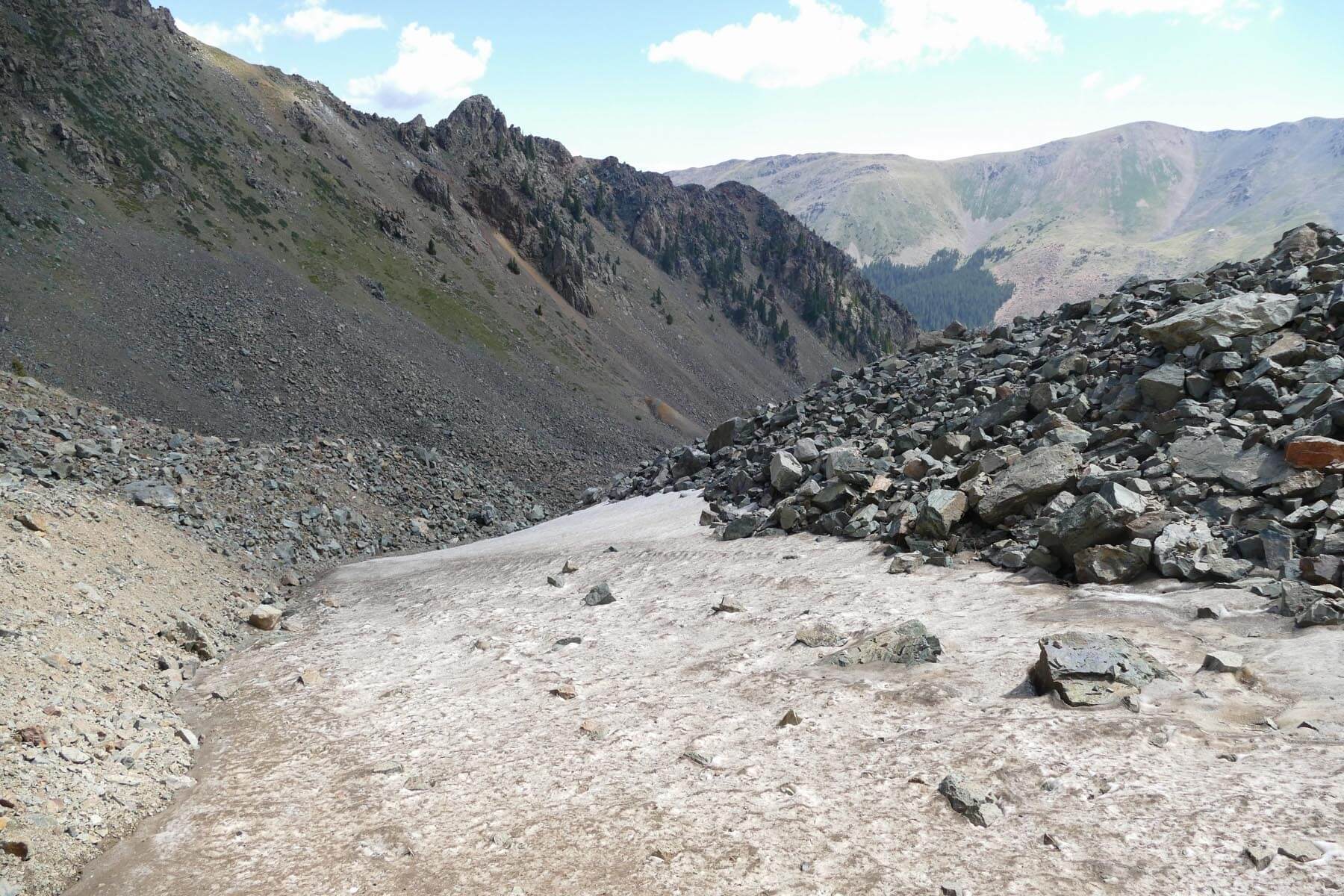 The snow field where the breeding pair was found. Photo by Raymond VanBuskirk