Sweet song of the Prairie Skylark

Once referred to as the Prairie Skylark, the Sprague’s Pipit (Anthus spragueii) is a drab-colored yet charismatic songbird of North America’s grasslands. Most people have probably never heard of the Sprague’s Pipit—let alone seen one—but if you’ve wandered the Northern Great Plains in summer, you’ve likely heard them. They are known for their sweet song and high-altitude aerial display, which can last for hours.

Unfortunately, we could lose this species and its iconic song entirely if we don’t take action.

Listed as “Vulnerable” under the IUCN Red List of Threatened Species, “Threatened” under Canada’s Committee on the Status of Endangered Wildlife, and as a “Bird of Conservation Concern” by the U.S. Fish and Wildlife Service, the Sprague’s Pipit has been on a lot of conservationists’ minds. Why are their populations declining so rapidly? How can we conserve a migratory species that spends its life within the remote prairies and grasslands of Canada, the U.S. and Mexico?

We know that pipits⁠—as well as other species of grassland birds⁠—face many threats across their range. Conversion of grasslands to cropland, poorly managed grazing, exposure to pesticides, increased drought, and shrub encroachment are just a few. What we don’t know is when and where in the pipit annual cycle that they are most at risk. To get to the root of the problem, we need information from the breeding and nonbreeding (i.e. migratory and wintering) grounds, a feat that is no easy task. 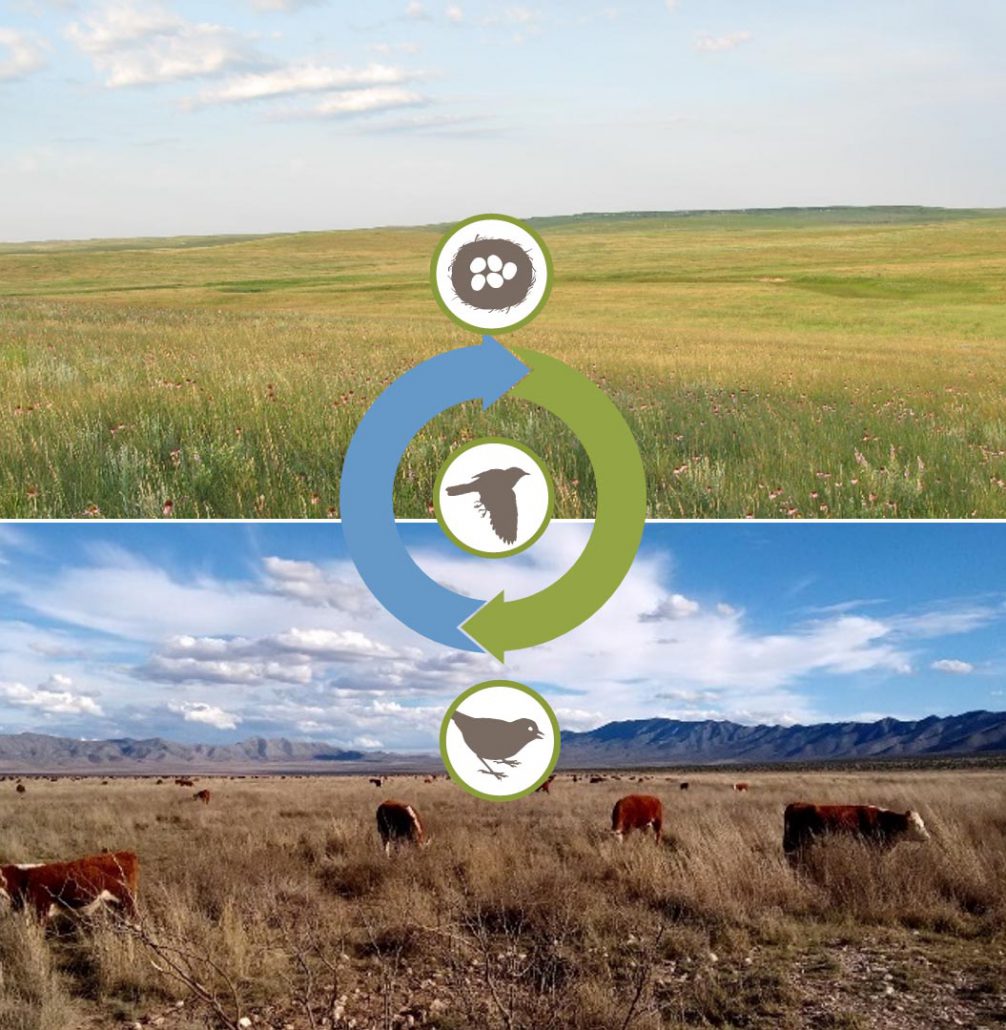 At Bird Conservancy of the Rockies, we’ve taken a full annual cycle approach to understanding drivers of grassland bird declines. Via a network of supporters and collaborators in the U.S., Canada, and Mexico we’ve radio-tracked thousands of Baird’s and Grasshopper Sparrows on the breeding and wintering grounds, collected habitat data at these sites with drones, and have begun to fill key information gaps on survival, nest success, and habitat use.

A tricky bird to study

Conservation of the Sprague’s Pipit requires similar monitoring efforts to fill some huge information gap that exist for this species—but this is easier said than done. On the wintering grounds in the Chihuahuan Desert, pipits are secretive and often in low numbers across the landscape. They are difficult to detect and even harder to capture in mist nets! Approach a pipit without the right level of tiptoeing and patience, and the bird will launch into the sky and likely land out of sight. On the breeding grounds, one can hear displaying male pipits from great distances. However, you may need to crane your neck and squint your eyes before you’ll spot their tiny silhouettes circling and gliding as they sing.

To capture breeding pipits, we set up a pair of nets and broadcast a male pipit song from a speaker, hoping to draw in a territorial bird. Sometimes it works—and sometimes the clever bird will approach the net only to avoid it at the last minute!

The desert grasslands of Chihuahua are the wintering grounds for Sprague’s Pipits and many other migratory grassland birds. In this video, a team of bird-herders slowly walk in unison in an effort to drive birds toward a mist net. If they are successful, one or more birds will be captured and can then be banded and/or radio-tagged for monitoring purposes.  This information helps us better understand how birds use and move across this grassland landscape during winter.

Can you spot the Sprague’s Pipit? Even though its smack dab in the middle of this picture, she’s hard to pick out. Their drab colors help them blend in with their surrounding environment and avoid predators such as Loggerhead Shrikes and Merlins. Photo: Laura Heredia

Fortunately, with a good deal of effort, we’ve captured, radio-tagged, and tracked 18 Sprague’s Pipits on the wintering grounds within the Chihuahuan Desert and another 42 birds on the breeding grounds of the Northern Great Plains. With data from tracked birds, we’ve identified the type of habitat preferred by this species as well as size of their winter home range. These results were recently published in the Wilson Journal of Ornithology and indicate that pipits prefer areas with more bare ground which may reflect their foraging preferences or predator avoidance strategies. These results highlight the importance of maintaining diverse habitat structure within grasslands to benefit a broad suite of grassland birds. For example, on the wintering grounds species such as Baird’s Sparrows use areas with denser taller grass while Sprague’s Pipit select areas with more bare ground.

A Sprague’s Pipit is captured in a mist-net and delicately removed before it is banded. Photo: Erin Strasser 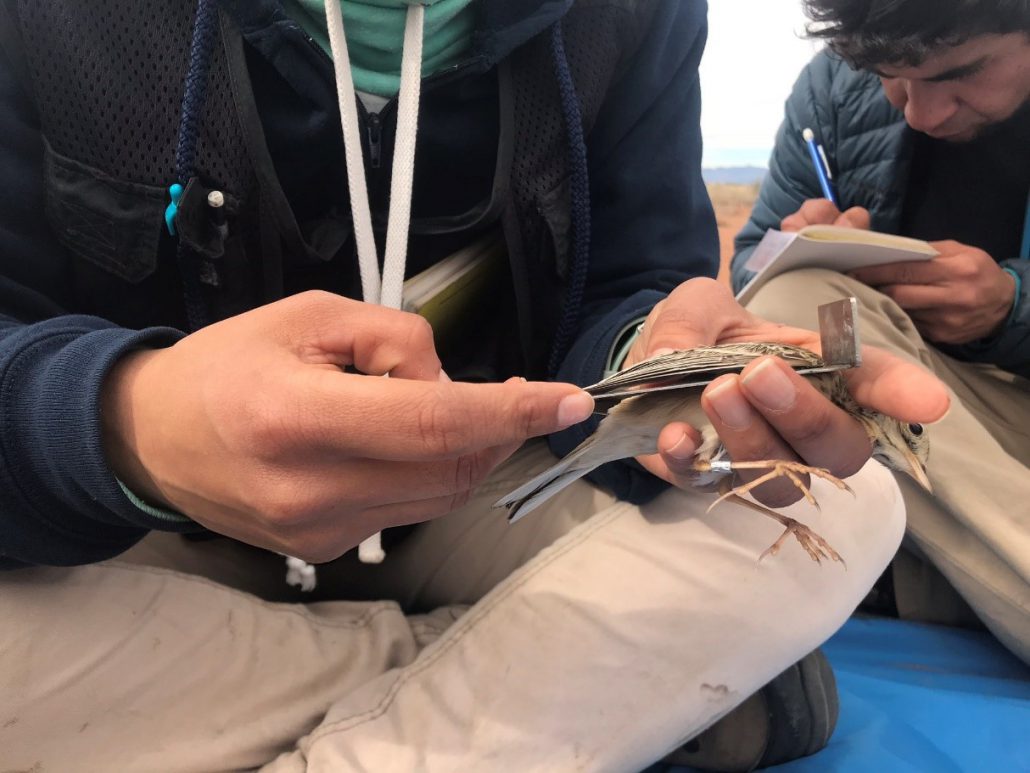 After the arduous task of capture, we measure, weigh, look for feather molt, and age each pipit. Photo: Erin Strasser

A Sprague’s Pipit outfitted with a lightweight radio-transmitter. Photos by Erin Strasser

On the breeding grounds

Within the Northern Great Plains, we’ve monitored pipit nests and radio-tracked adult males at sites in northeastern Montana and western North Dakota. Preliminary results from these sites indicate that survival of adult pipits is high during the breeding season. Nest success was around 19% and was related to vegetation density around the nest; nests with intermediate vegetation cover had lower success. Click here to download the full report. On both the breeding and wintering grounds it appears that some individual pipits move long-distances. We aren’t sure why some pipits stay put within a winter or breeding territory or what impact these movements could have on their survival, important information for identifying drivers of population declines.

Sprague’s Pipits nest on the ground, sometimes forming a dome of grass to aid in thermoregulation and to conceal the nest from predators.

A nest full of recently hatched Sprague’s Pipit nestlings. Nestlings fledge the nest at around 10-14 days of age, however they won’t fly for several days after fledging. They certainly have a long way to go before they can perform the aerial displays of the adult males.

A nestling Sprague’s Pipit close to fledging. It appears that its siblings have already left the nest!

Future efforts will aim to understand winter survival, connectivity between the wintering and breeding grounds, and larger-scale movements of pipits across the migratory and wintering grounds. We have a long way to go before we can definitively say where and how we can have the greatest impact on pipit populations, but every data point brings us closer and closer.

Erin Strasser releasing a Sprague’s Pipit in the grasslands of Janos, Chihuahua, MX.

Did you know that we’ve lost almost 3 billion birds in the last 30 years?  It’s a staggering number, and grassland birds are among the hardest hit. Your support fuels our urgent efforts to understand the conservation needs of Sprague’s Pipits and many other grassland birds. Thank you for helping #BringBirdsBack!