Due to their severe declines over the last 50 years, Bird Conservancy of the Rockies is strongly focused on the conservation of grassland birds. We need to better understand the causes of precipitous population declines in grassland birds. This means learning more about bird movement patterns, identifying threats, identifying critical habitat needs, and guiding conservation efforts in the places that need it most. Because many of these species migrate, we also need to study them across their full annual cycle.

Bird Conservancy and our partners spent much of 2021 implementing the first phase of a network of bird tracking stations across the Great Plains. This network, part of the Motus Wildlife Tracking System run by Birds Canada, leverages the power of partnerships and includes over 1200 stations (and growing!). These stations use autonomous radio telemetry gear to track birds and other small animals wearing tiny coded radio tags. (Read more about the basics of our Great Plains-Chihuahuan Desert (GPCD) Motus network and other Motus initiatives in our “Over the Airwaves” Blog from April, 2021.)

A  Motus network functions when there are many active telemetry stations throughout a geographic area, but also requires that researchers deploy radio tags on animals using that landscape. Bird Conservancy leads demographic and tracking research on grassland birds across their full annual cycle and spearheaded the Great Plains-Chihuahuan Desert (GPCD) Motus network with the aim of filling knowledge gaps.

From May-July, we visited shortgrass prairie habitat in Northern Colorado to deploy coded radio tags on birds there. We tagged breeding Baird’s Sparrow (4 individuals), Grasshopper Sparrow (4), Thick-billed Longspur (2), and Lark Bunting (6). These tags weigh slightly over ½ a gram and are delicately attached to birds’ backs with a harness of nylon-coated elastic around their legs. These tags should last into the winter months or longer, enabling us to track them for an extended time period whenever they come within range of a Motus station. Tagging these birds was certainly a highlight of this year’s work, but we spent most of our time traveling and installing Motus stations, an essential first step in expanding and improving the network’s ability to detect tagged birds as they move across the landscape. 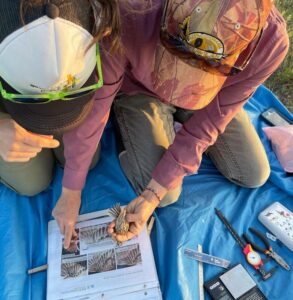 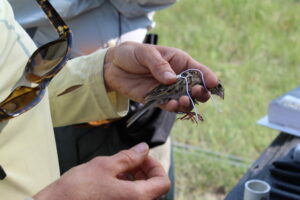 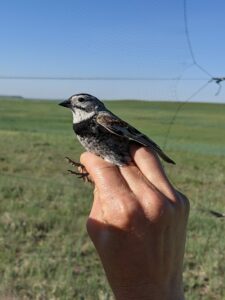 Implementing a full-fledged Motus network consists of wildly different skills and tasks. Some days we feel more like electricians or structural engineers than Avian Ecologists! Each installation is unique and brings new adventures, headaches, and trips to the local hardware store. Some installs even require wearing a hardhat and safety harness while operating an aerial lift nearly 40 feet in the air! It can be hard work out in the sun and exposed to the elements, but the final achievement is always gratifying. 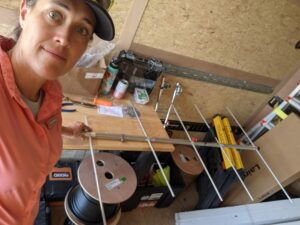 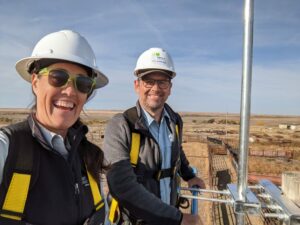 Erin Youngberg and Matt Webb in a lift installing a Motus tower. 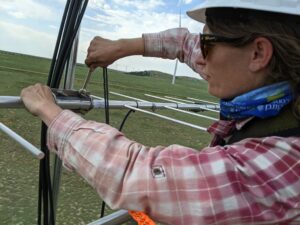 Spring and Summer: Ramping Up

Our 2021 expansion of the Motus network began in the spring. After months of planning and preparation, the “Motus Erins” (Avian Ecologists Erin Youngberg and Erin Strasser) and I (Avian Ecologist Matt Webb) installed the first Motus station in April on the roof of the Fort Collins Museum of Discovery in Fort Collins, Colorado.  My previous experience installing LED lighting and other electrical components on historic buildings helped tremendously with this installation.

In June, Erin Youngberg and I set off on the first leg of our Great Plains 2021 Motus Road Trip, driving from Colorado to Pittsburg, Kansas. We spent my birthday underneath a tower owned by the Crawford County Sheriff’s office while the certified climber we’d contracted deftly attached a full array of Motus antennas about 100 feet up. It was amazing to watch the climbing team work out the physics of hoisting our array up the tower to just the right spot, with attachment points aiming the correct way! After a long eleven-hour day, with lots of on-the-fly thinking, GPCD Greenbush was up and running! 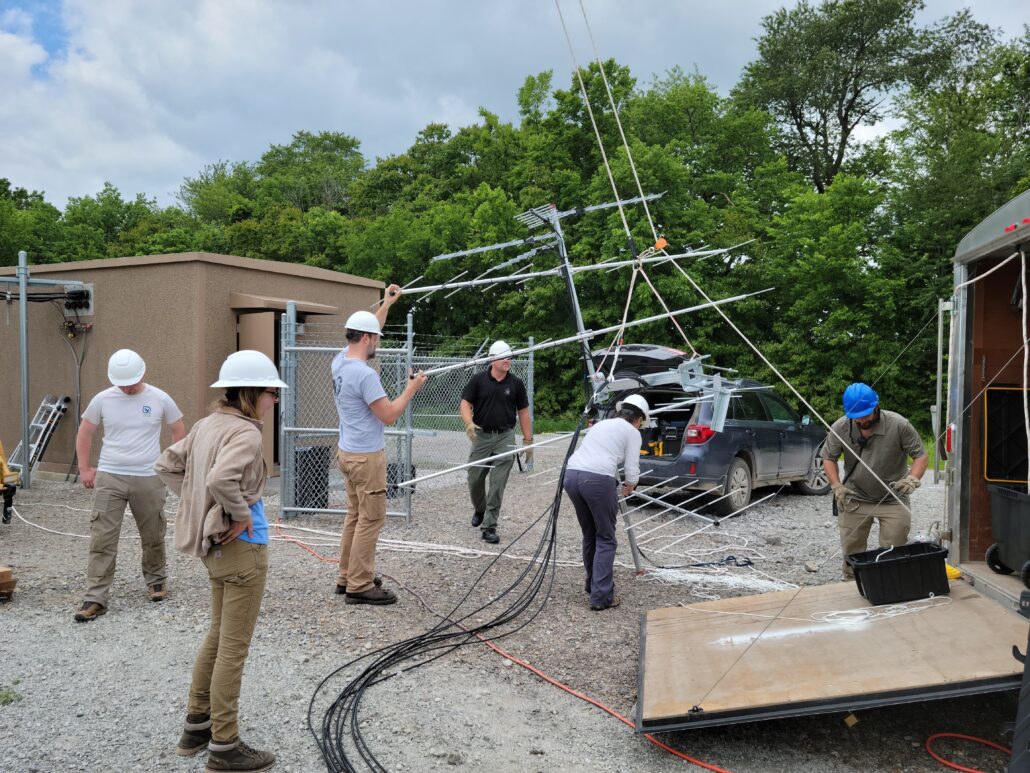 From there, we met a partner wanting to install a Motus station at an Air Force Base in Wichita, visited a Kansas State Park north of Wichita to plan a future Motus installation there, and installed a tower at the Tallgrass Prairie National Preserve run by the The Nature Conservancy (TNC)! We particularly relished our long drives through the chest-high grasses, distracted by the many wildflowers blooming, insects buzzing, and turtles crossing the road, all surrounded by the soundscape of Dickcissels and Eastern Meadowlarks! With the help of our collaborators at TNC, we were able to get GPCD Tallgrass Prairie Motus station built in a day and a half.

Next, we next headed to Manhattan, Kansas, to meet up with long-time Bird Conservancy collaborator Dr. Alice Boyle from Kansas State University, who is researching grassland birds at KSU’s Konza Prairie Biological Research Station. This was also the site of our next installation. Dr. Boyle graciously hosted us in her home during out time there, and also helped us construct this station. Before long GPCD Konza was online and listening for tagged birds to pass by. To round out the trip, we visited the site of a future Motus station at Quivira National Wildlife Refuge and stopped by Cheyenne Bottoms Preserve to ask the perennial question “Whatcha’ Doin’ Rob?” to a longstanding advocate for Motus, Robert Penner, of the Kansas Shorebird Radio Telemetry Project and 2021 recipient of the Bird Conservancy’s Richard G. Levad Award. 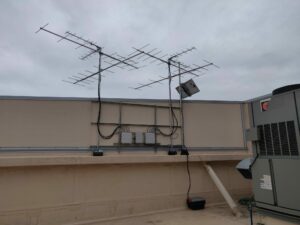 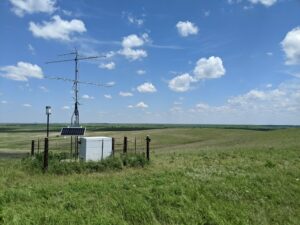 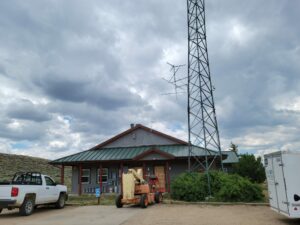 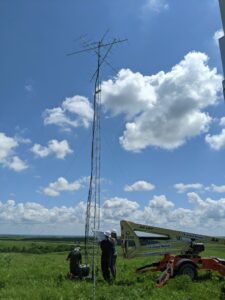 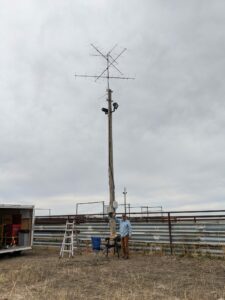 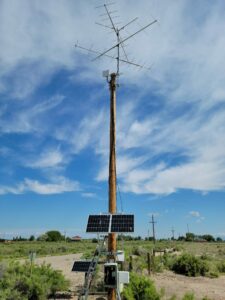 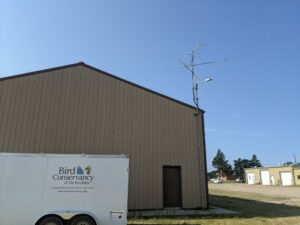 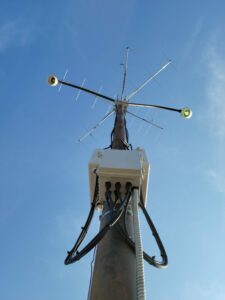 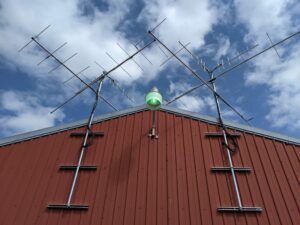 After returning to Colorado we immediately began planning for our next trip less than two weeks later. This time, we traveled on the road east of Walsenburg, Colorado to the nearby Rancho Largo Cattle Co. This station was installed on an abandoned utility pole and required creativity and customization. By dusk that day, the seventh Motus station, GPCD Ruth Bader Ginsberg was online. The next morning, we headed to the beautiful Alamosa National Wildlife Refuge where we connected with Refuge staff and got started with our next installation. The Refuge is truly beautiful, hosts abundant bird life, and should be a destination for anyone spending time in Colorado’s San Luis Valley.  At the end of a long second day, we had GPCD Alamosa NWR working, and started the return drive home. 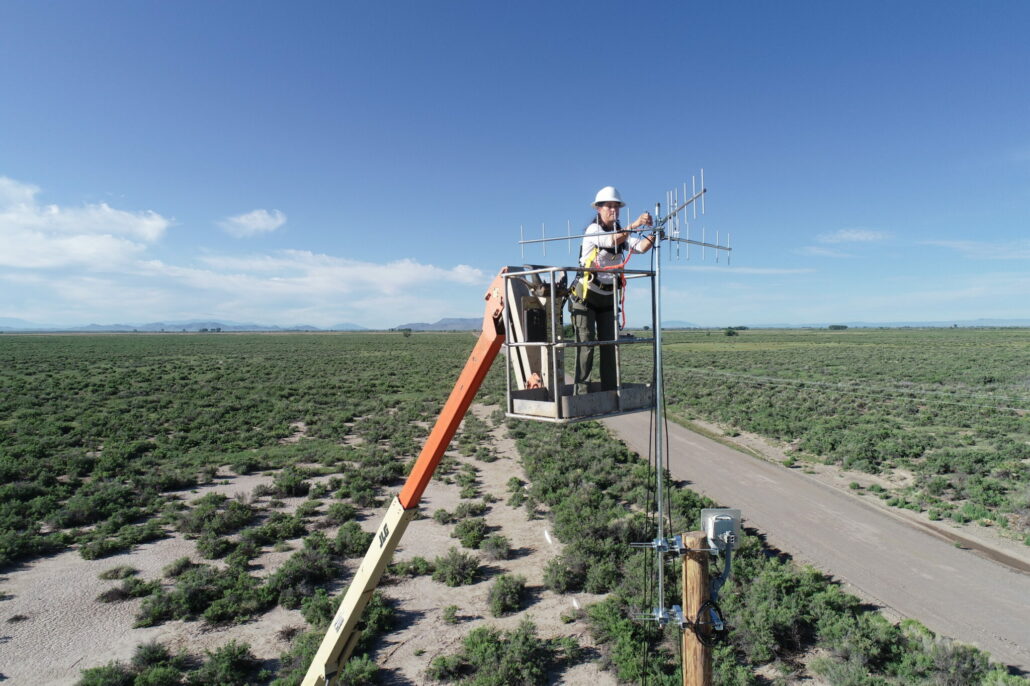 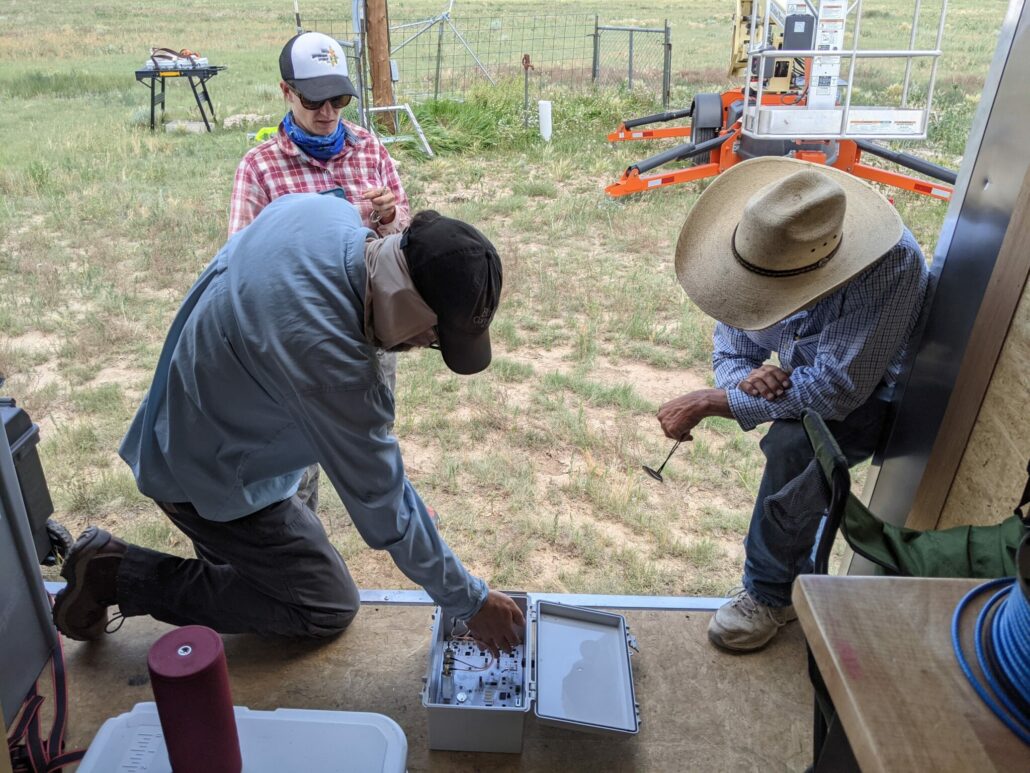 Board Conservancy Board member Grady Grissom, owner of the Rancho Largo Cattle Co., with the Motus crew.

July took us to Walden, Colorado, the “Moose Viewing Capital of Colorado” and nearby our next station installation at Arapaho National Wildlife Refuge. As we drove west from Fort Collins through the Poudre River canyon, we were stunned by the scars left by the Cameron Peak fire last year–the largest forest fire to burn in Colorado history. Unfortunately, we didn’t see any moose but we did spy a black witch moth, which flew, bat-like, right under us as we worked within the refuge headquarters. With the expert help of USFWS volunteers, and under the watchful eye of a nearby red fox and the refuge staff dogs, the GPCD Arapaho NWR was online. In August Matt and Erin Youngberg returned to Kansas for more Motus towers–we installed the first at Quivira National Wildlife Refuge and the second at El Dorado (rhymes with tornado) State Park. Our site visits earlier in the summer had prepared us well for efficiency.

Our fall Motus tour started in September with a trip to the Crane Trust Headquarters in central Nebraska, and the Audubon Center’s Rowe Sanctuary along the Platte River. These two stations were strategically located to detect birds migrating and stopping-over on their way north or south. Just one month after their installations, they have already detected a birds that were tagged by partners including Sprague’s Pipits from northeastern Montana.

Our most recent road trip in October took us through Karval, CO to visit their High School and plan a future installation, then on to our next station installation site near Lamar, CO with the Southern Plains Land Trust. That very weekend the station detected southward movements by a Thick-billed Longspur that we had tagged at Soapstone Prairie Natural Area north of Fort Collins in July! 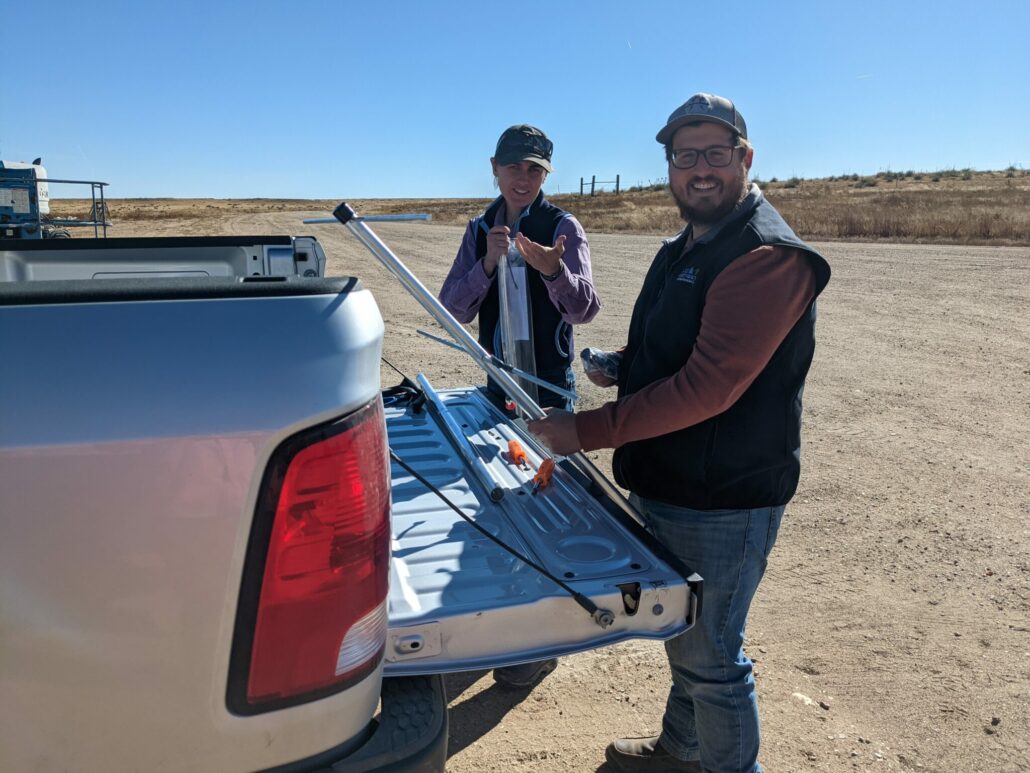 We were joined by two of our Private Lands Wildlife Biologists, Katie Merewether and Trent Delahanty, who chipped in to help with the installation. 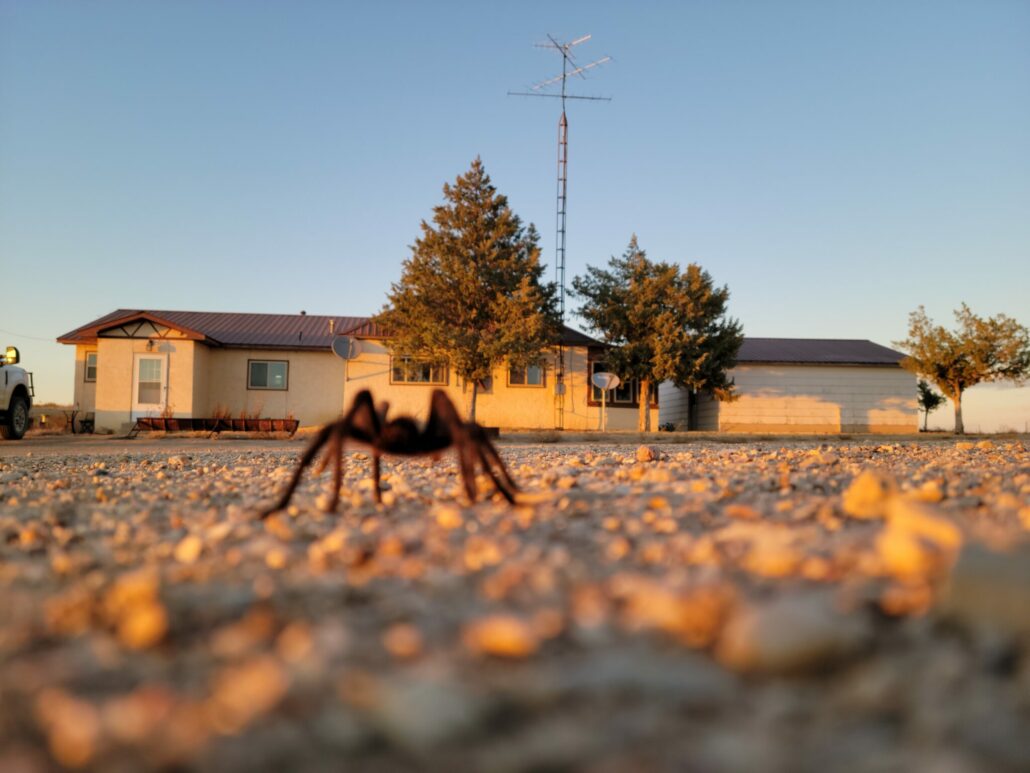 Southern Plains Land Trust Station. We were entertained by the final days of the famed “tarantula migration” and spotted several males on their last legs aimlessly wandering the desert roads.

Erin Youngberg & I then headed to Kansas once again to install a station at The Nature Conservancy’s Smoky Valley Ranch. The two of us rocked this installation in one long day, stopping briefly to listen to migrating Sandhill Cranes and watch a distant bison herd. We were getting pretty darn good at this by now.

It’s been an exhilarating, exhausting, and rewarding year of Motus station installations. We’ve seen amazing places across central North America, worked closely with new and existing partners, put 18 new Motus stations on the map, planned future stations, and more exciting than anything, we watched these stations detect tagged birds. We can hardly get these stations up fast enough! 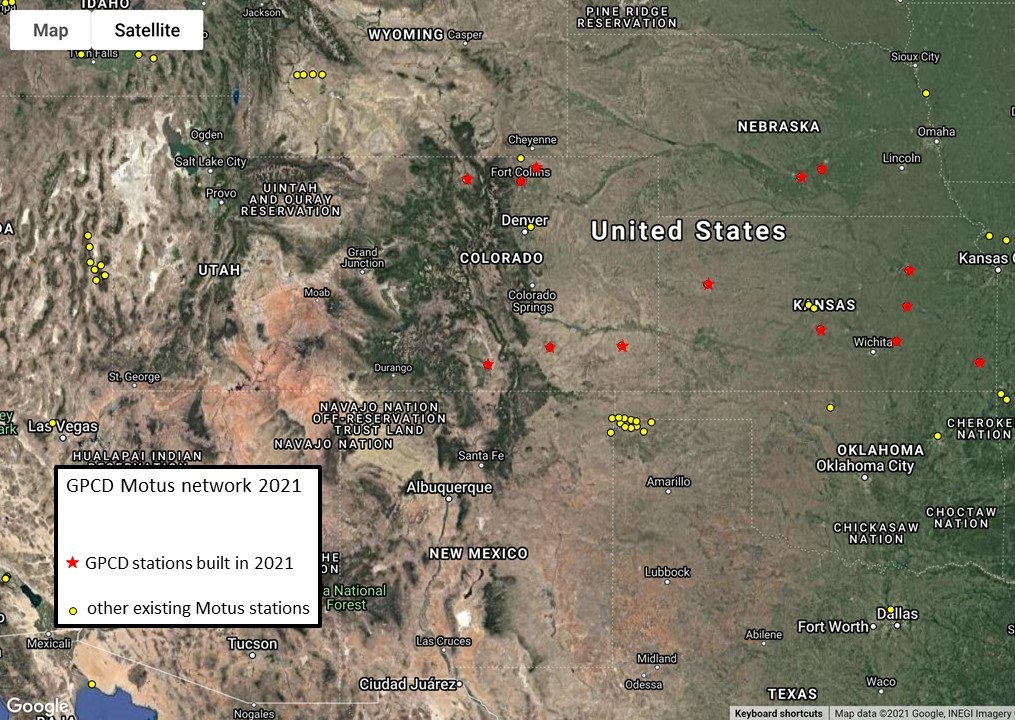 Bird Conservancy staff have plenty of work in store for the Great Plains-Chihuahuan Desert Motus Network this winter. In addition to a few more stations slated for northern Colorado, we are traveling to Far West Texas to install our first Chihuahuan Desert station at the Dixon Water Foundation’s Mimm’s Ranch, as well as visiting and installing numerous stations on the grassland bird nonbreeding grounds in northern Mexico. While there, we’ll be providing training for partners involved with or interested in Motus projects, as well as deploying of over 100 radio tags on nonbreeding grassland birds.

This work is funded by the US Fish and Wildlife Service, The National Fish and Wildlife Foundation via the Conoco Phillips Spirit of Conservation and Pecos Watershed, Birds Canada. Thank you to our many partners for providing access to their properties and logistical support. Photos by Erin Youngberg, Erin Strasser, and Matt Webb unless otherwise stated. If you have any questions or would like to learn more about the Motus Wildlife Tracking System, please contact Matt Webb at [email protected].