Living on the Land

“I went to the woods because I wished to live deliberately, to front only the essential facts of life, and see if I could not learn what it had to teach, and not, when I came to die, discover that I had not lived.”

Over the past year, I think it’s safe to say we’ve all had days, weeks or months where we’ve struggled with the world around us. As a biologist, my experience stems from the tactility of field work. One of my greatest challenges has been the transition to computer-based telework. I’d rather be behind the wheel of a pickup on a dirt road than logging into my fifth Zoom meeting of the day. However, there are often gifts born of hardship that don’t always present themselves immediately, and the past year gave back in unexpected ways. 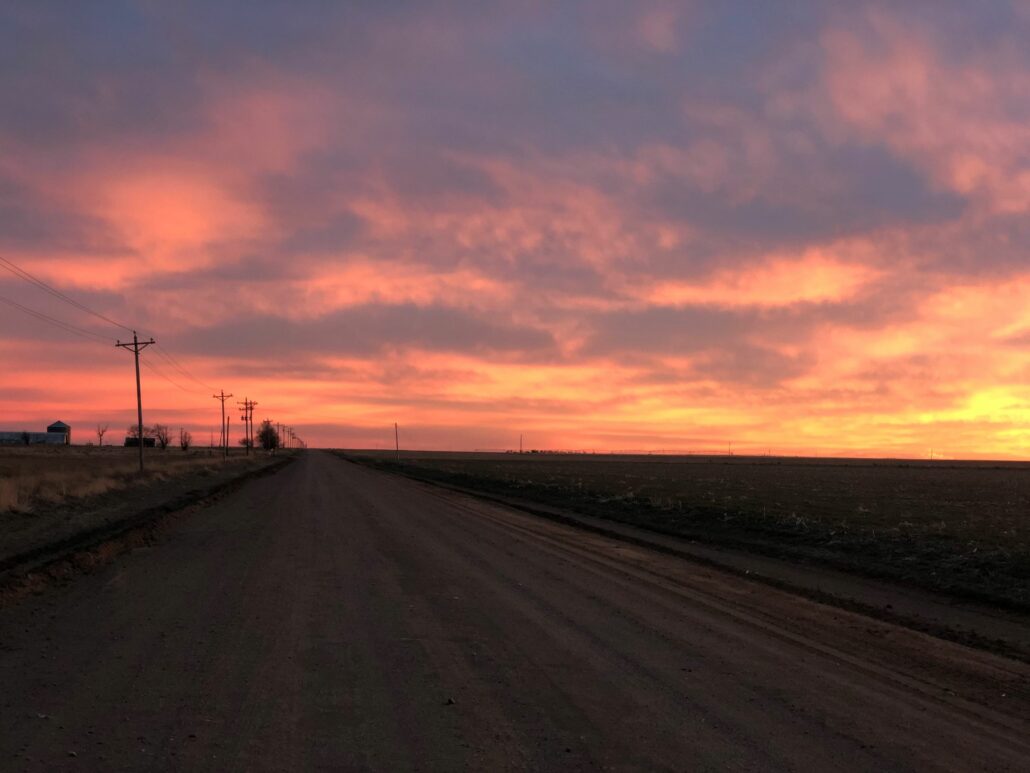 County road at dusk. All photos by Justin Lambert unless otherwise noted.

Much of my relationship with the natural world has been formed through field work. With a sweaty brow and hands stained in soil, I’ve had moments where I’m intertwined with the land: the past, present and potential. I am continuously chasing that sensation of unbearable gratitude and beauty, but I never know where or when I’ll find it. 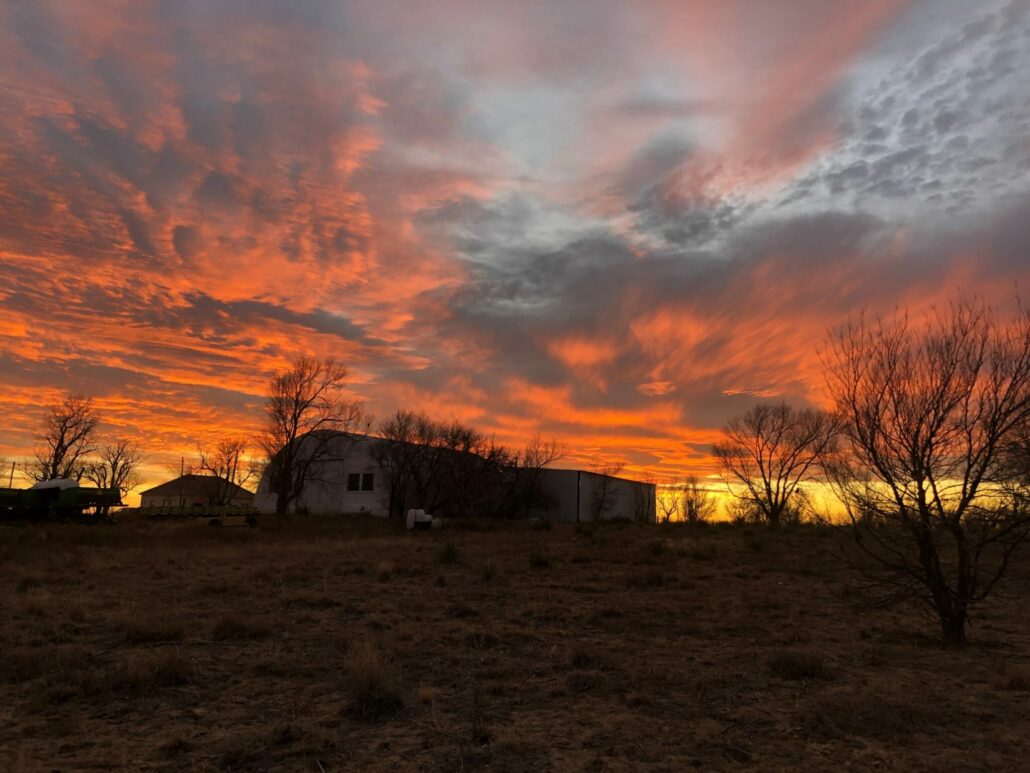 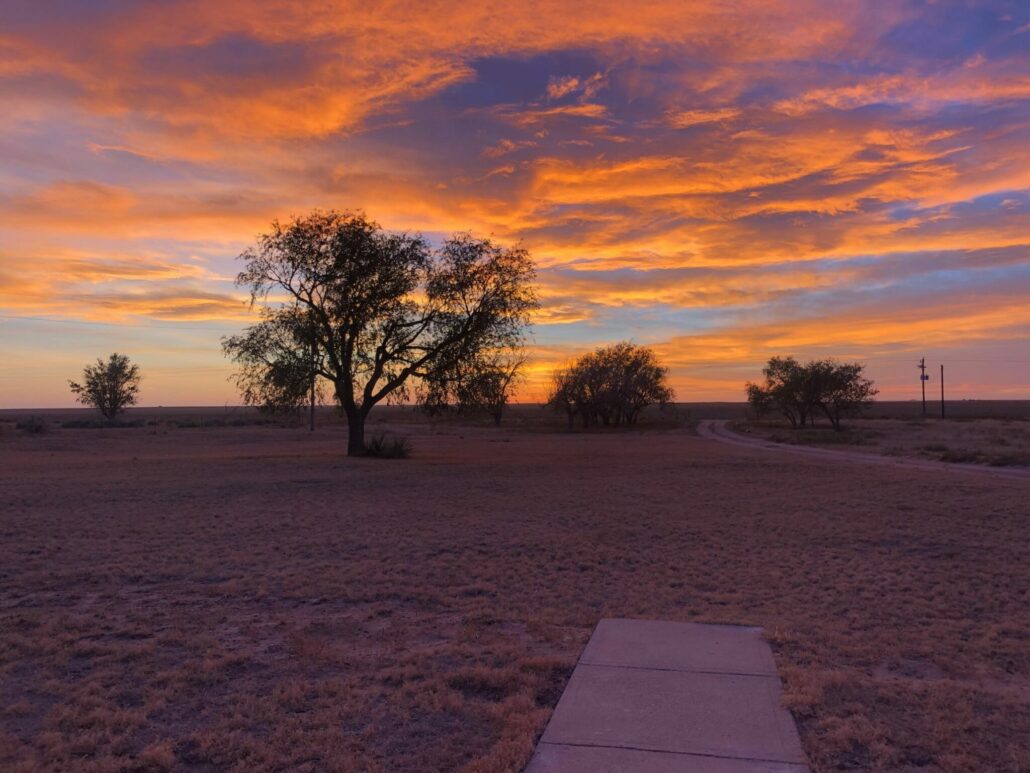 As a new Private Lands Wildlife Biologist starting my position during the pandemic, I was concerned I would lose my focus on the land to the dull blue light of a computer screen. I began working from home in late November. We were entering winter and the landscape was dormant, field work was minimal, and my world felt confined to the two-bedroom farmhouse that I rent off of a dirt road in southeastern Colorado. As winter lifted and spring approached, I realized my forced immersion into a life of solitude on this quiet farm actually allowed me to witness the passage of time from a subtle, unfamiliar lens. A simple change in the weather unveils the complex relationships woven into the farm, ecosystem and inhabitants, myself included. The telework I once dreaded is now an exercise in observation and prediction. The excitement of discovery comes with my morning coffee. 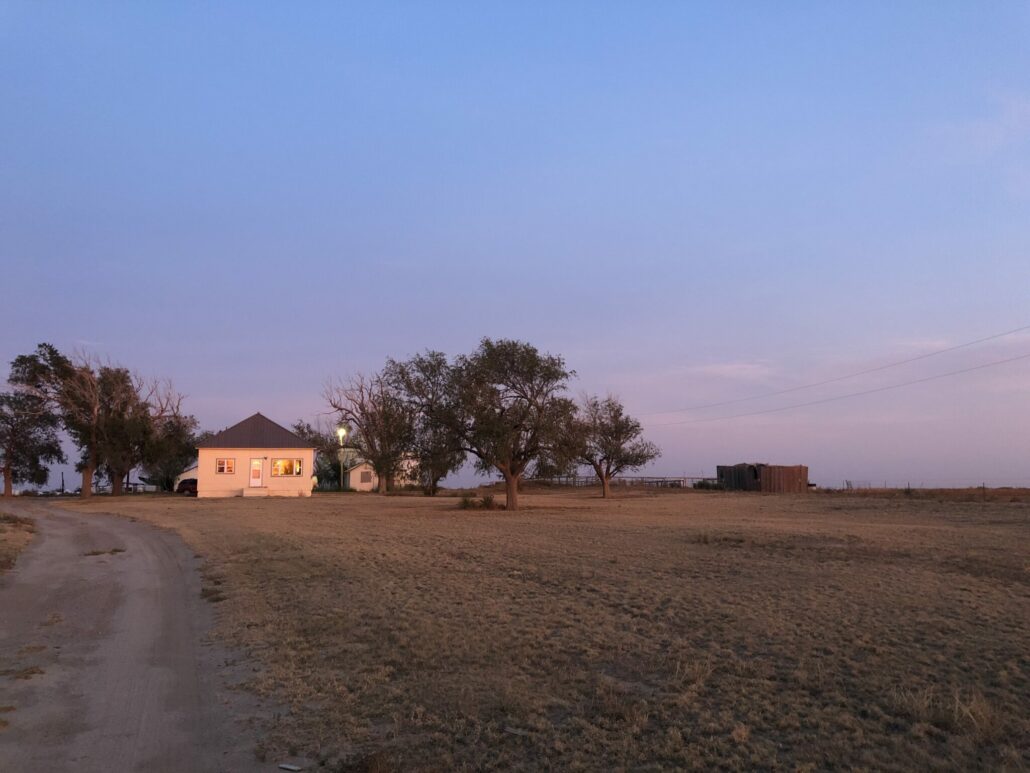 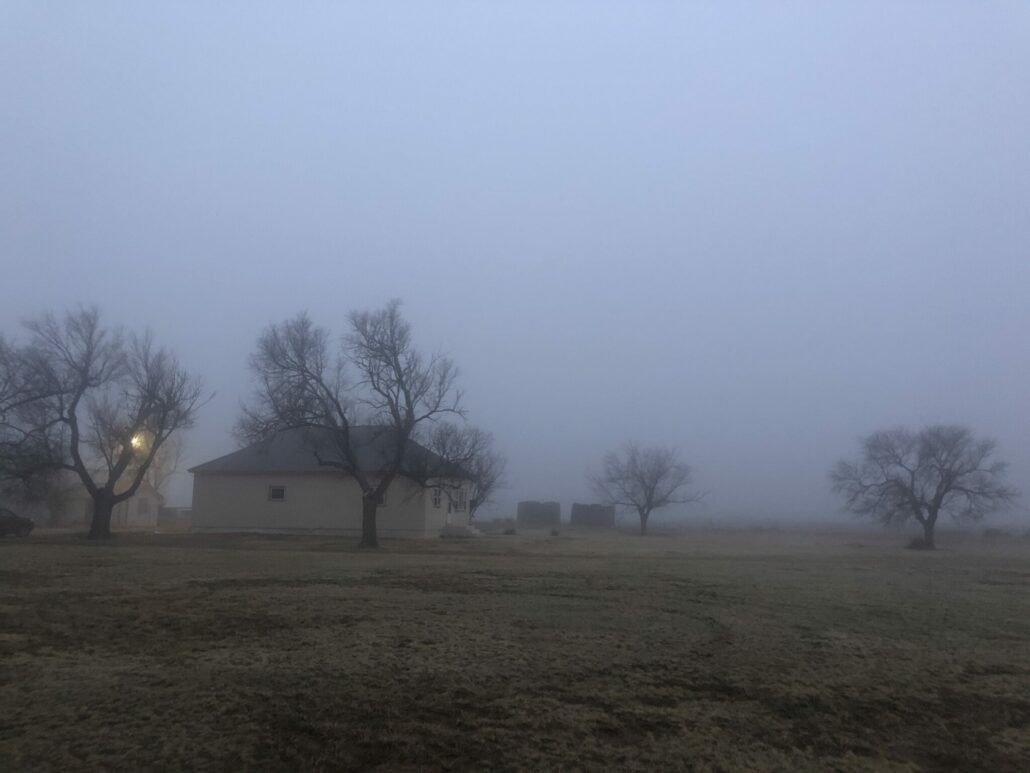 The Beauty of the Mundane

By residing in a remote rural area, I’ve gained insight into what it means to live and work on the land. Thought becomes more deliberate and the senses heightened. By slowing down, watching and listening, a world unfolds that is not evident upon first glance, but once it’s seen, there’s no unseeing it. It’s common to interpret the natural world from its aesthetic appeal—an Instagram post, or a National Geographic layout. We get caught up in the next beautiful location, that leads into the next, then the next and the next. We look for those one-of-a-kind experiences of adventure and forget the everyday beauty of the mundane. Life out here has a timeless quality, reminiscent of a Steinbeck novel or a Coen brothers film. I often catch myself wondering if I’m living in 2021 or 1921.

The farmhouse often speaks through a language of creaks and whistles as gusts of wind push and pull at its appendages. My largest window looks out upon the southern pasture filled with grazing Corrientes, a Spanish breed of cattle used for roping and my closest neighbors. The day before I write this, I witnessed the birth of a calf through that window. I watch Northern Bobwhite coveys stuff their gullets every morning under a Siberian elm and quickly scurry back to the protection of soapweed yucca and sand sagebrush like little businessmen late to a meeting. I see the smooth glide of Northern Harriers soar low above the crop residue. A resident pair of American Kestrels remind me that even small raptors have buddies. Curved-billed Thrashers smirk at me with their blood-orange eyes. My morning jogs along the two-track dirt road  through fields of sorghum and winter wheat sometimes flush a bobcat or coyote by surprise. They make regular appearances on a game camera I move occasionally throughout the property, giving me glimpses of the cryptic lot who do most of their work behind the scenes (see videos below).

The farm encompasses 320 acres of land consisting of two irrigated circles and a pasture stocked with Corrientes. The adjacent county road is rarely used, and the closest town —seven miles north —has a population of 107. The property is situated in the shortgrass prairie of the Southern Great Plains, equally distant to the Kansas border and the Oklahoma panhandle. The Comanche National Grassland fills out the landscape between homesteads, farmland and rangeland. This area was one of the hardest-hit regions during the Dust Bowl of the 1930s. Occasional dust storms act as reminders of the ecosystem’s past trauma and ongoing recovery.

Part of a Private Land Wildlife Biologist’s work is to partner with local Natural Resources Conservation Service field offices to provide technical assistance for local landowners, including  ranchers and farmers. We do this in part by working and living in rural communities, and communicating directly with landowners. The ability to understand the concerns and needs of local agriculture producers is critical in establishing a relationship rooted in trust. Good conservation is a collective act. The most valuable tool of a biologist is their ear. We strive to listen with the intent to understand the values and operations of ranchers and farmers. By developing a foundation of trust, landowners are more eager to build upon conservation practices. Those practices help maintain an economically viable operation that enhances rangeland health and quality habitat.

A disagreement between two bulls. 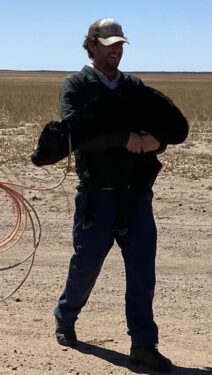 The author retrieving a 2-day old calf from a nearby milo field. Photo by Kristy Turner.

A newly born calf relishes the zest of youth.

There’s an inherent wisdom among ranchers and farmers that is developed by slowly observing the land through continuous seasonal fluxes. Whenever I visit with landowners, I gain insight into how they hone their crafts, and master a wide range of skills. They have obtained this certain wisdom through a lifetime of producing food from seed or calf that only hands-on experience can provide. While I’ve only just skimmed the surface of life on a farm, I hope that this sandy soil stays under my fingernails for a long time to come. 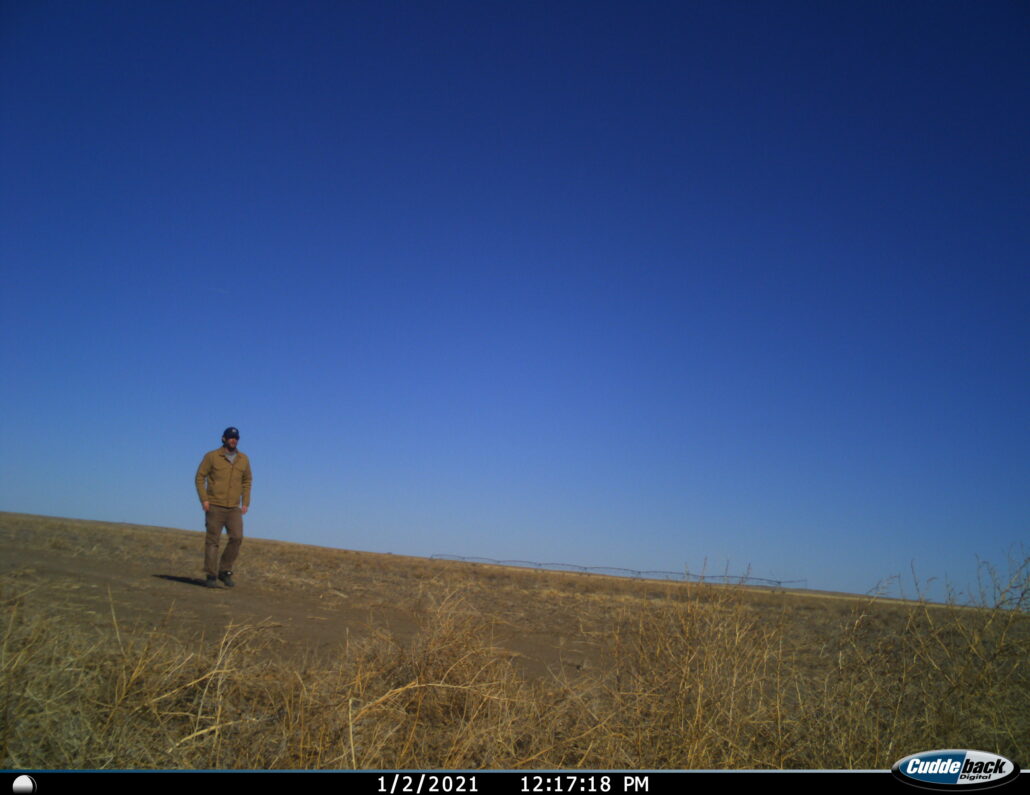 The author captured on a game camera.

Justin Lambert (based in Fort Morgan, CO) is employed by Bird Conservancy of the Rockies with funding support from the USDA Natural Resources Conservation Service. All photos and videos were taken by Justin unless otherwise noted.