Going to Bat for Birds

While bats are most definitely not birds, they do share some things in common.

Both are creatures that can fly, eat insects, are found in a variety of habitats, and can be used as indicator species when looking at ecosystem health.  We even apply some of the same techniques used to study birds when studying them. Bats can be identified by their calls like birds, though not quite as reliably. We use mist nets to capture bats and they can even be banded like birds. Bat habitat needs can also overlap with those of birds. For example, forest thinning can improve the health and resilience of the forest system, improving habitat for bird species that also depend on forested areas. 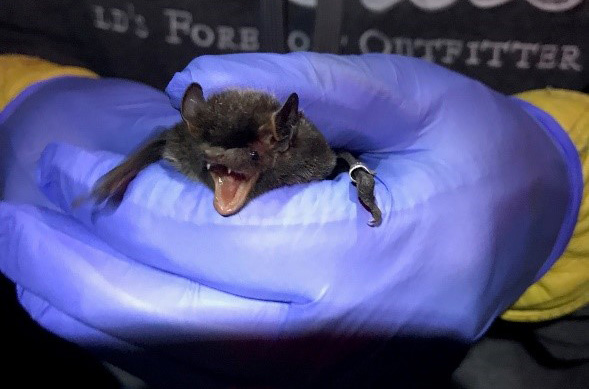 If you look closely at this silver-haired bat (Lasionycteris noctivagans), you can see a small metal band, similar to the bands used on birds, on its left forearm. Several studies are being conducted in Nebraska by researchers from University of Nebraska – Lincoln and University of Nebraska – Kearney. Little is known about the migration of these bats. Banding and recapture gives insights about where and when bats travel. Photo by Katherine Crawley, Nebraska Game and Parks Commission.

Bird Conservancy’s stewardship biologists work with partner agencies and private landowners to improve habitat for birds and other wildlife while helping landowners and managers meet their operational and conservation goals. In Nebraska, Bird Conservancy’s stewardship biologist position is part of a partnership with the Nebraska Game and Parks Commission and is one of several Coordinating Wildlife Biologists across the state that work to implement Nebraska’s state wildlife action plan (SWAP), the Nebraska Natural Legacy Project.  State Wildlife Action Plans are congress-mandated assessments of wildlife and habitats in need of conservation for each state. Each SWAP identifies species of greatest conservation need (SGCN) and are required for states to receive funding through the Wildlife Conservation and Restoration Program and the State Wildlife Grants (SWG) Program administered by the US Fish and Wildlife Service. While our biologist’s work primarily focuses on private lands, there are exceptions that involve conservation efforts on public lands as well. 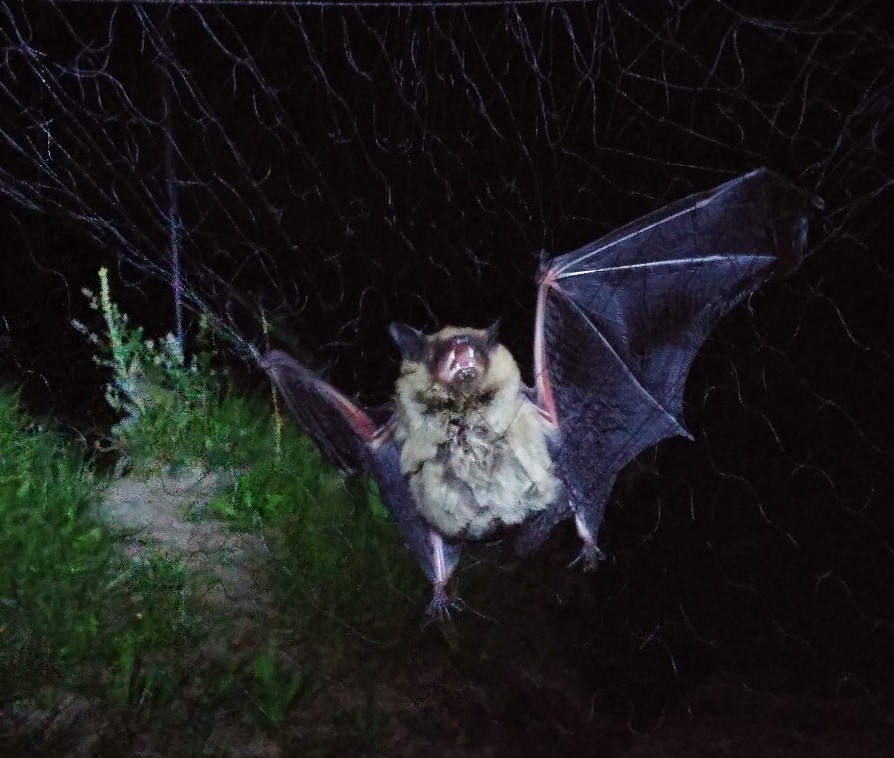 The same type of nets are used to capture bats, like this big brown bat (Eptesicus fuscus), as the mist nets used to capture songbirds. The main difference is that the nets used to catch bats are typically much higher than the ones used for birds. Photo by Erin Divine, Bird Conservancy of the Rockies.

Often, the state wildlife grants Nebraska receives are statewide grants that can be used in any of the priority areas—biologically unique landscapes (BUL). BUL’s are identified in the Legacy Plan and do not specify improvement for particular species, but relate to any of Nebraska’s species of greatest conservation need.  One of the current grants is specific to a BUL, the Pine Ridge in northwestern Nebraska, and is particularly focused on research relating to (and improving habitat for) at-risk species of bats.

In recent years, there has been growing concern for bats. Many species populations have declined greatly with the spread of White Nose Syndrome, a fungal infection that affects hibernating bats. Other threats to bats include wind energy development, pesticide use, climate change, and habitat loss. 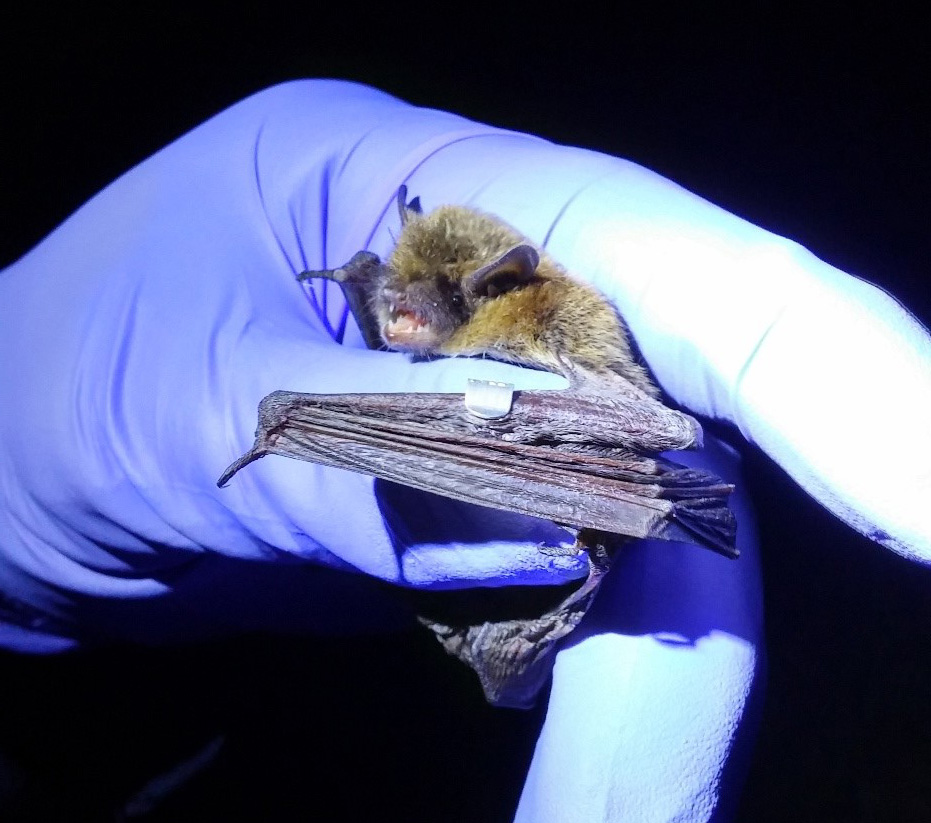 Another look at the bands used on bats. The metal band on this big brown bat (Eptesicus fuscus) is closed around the bat’s forearm just firmly enough to prevent it from falling off or sliding down to the bat’s fingers, but not tight enough to tear the wing. Photo by Erin Divine, Bird Conservancy of the Rockies.

We don’t know a lot about bats compared to what we know about some other groups of animals, like birds, and we are far from knowing everything about birds! This makes it a bit tricky to manage habitat with improvements for bats in mind, but what we do know is that bats need good roost sites, foraging areas, and access to water. Bats can use a variety of roosts including caves, rock crevices, cliffs, tree cavities, loose bark, and foliage.  Foraging areas can vary greatly among species and even, seasonally and spatially, within species. Bats use riparian areas, woodlands, forests, and grasslands for foraging. Availability of insects, proximity to day and night roosts, and areas that are uncluttered yet provide shelter, such as forest edges, are factors that influence bat foraging. When selecting sites for bat habitat projects, we look for places that have all three elements in the project area or nearby. 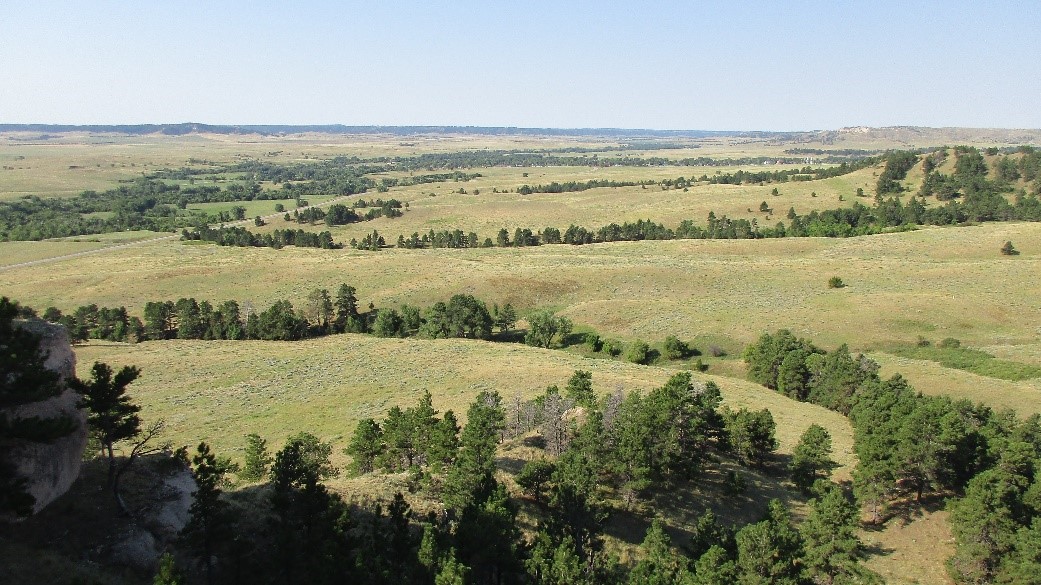 Habitat project sites are surveyed using Anabat Express™ passive acoustic detectors. These devices record the calls of passing bats to help determine which species occupy the area and their activity patterns. Photo by Erin Divine, Bird Conservancy of the Rockies.

One of the habitat improvement projects being delivered through this grant is a pine thinning project taking place at Fort Robinson State Park. Like many of our western forests, much of the ponderosa pine forest in the Pine Ridge is currently far denser that it would have been historically. Forest thinning can help both bats and birds. Thinning creates openings and edge habitat for foraging and as travel corridors.  Opening the canopy also allows for more light to penetrate the woodland floor. This helps create the right environment for the establishment of other woodland species, including many shrubs and deciduous trees.  Thinning can also create a healthier forest that is more resistant to stressors such as disease, create a more diverse understory, and reduce the risk of a stand replacing wildfire. 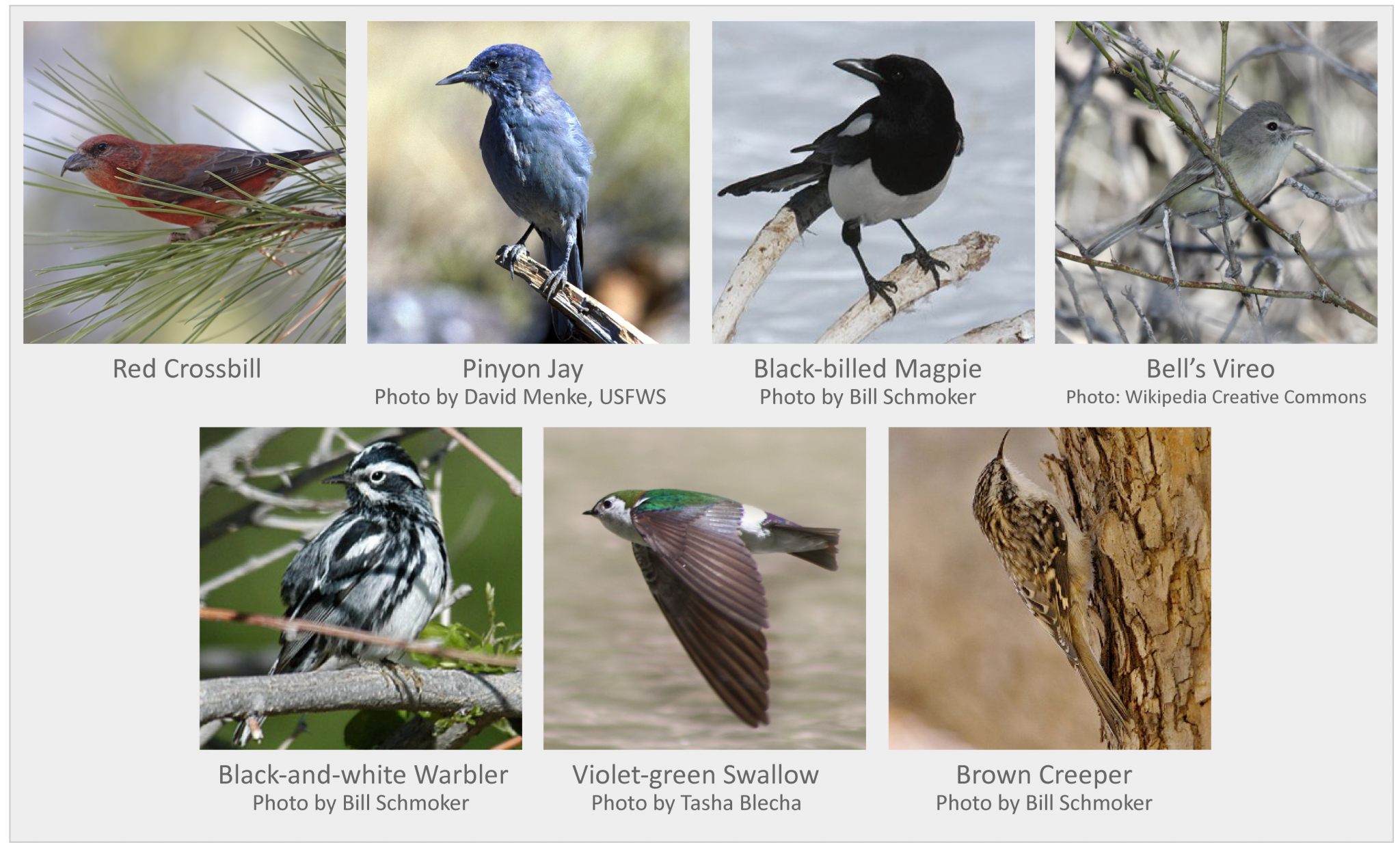 Some forest and woodland birds of the Pine Ridge (identified as at-risk in the Nebraska Natural Legacy Plan) include Red Crossbill, Pinyon Jay, Black-billed Magpie, Bell’s Vireo, Black-and-white Warbler, Violet-green Swallow and Brown Creeper. Ongoing monitoring of these birds will verify the effects and benefits gained in relation to bat-focused habitat efforts. 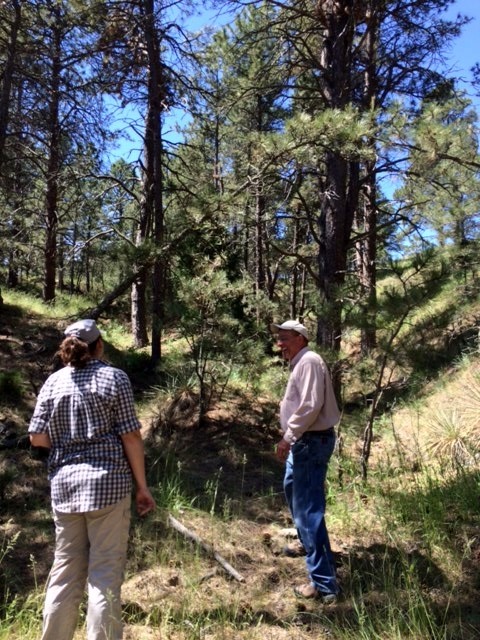 Stewardship biologist, Erin Divine, walking through the project area and getting some advice from Doak Nickerson of the Nebraska Forest Service, which provided very important technical assistance. Photo by Shelley Steffl, Nebraska Game and Parks Commission.

There are several different methods used to thin forests. For this project, we are using a group seed tree thinning method. This method of thinning will retain groups of trees of varying size classes providing more diverse habitat for bats and other wildlife. Thinning specifications also include retaining large diameter trees and snags. These large diameter trees and snags are more likely to contain cavities, crevices, or exfoliating bark that can be used by roosting bats (and cavity-nesting birds).  All deciduous trees are retained, also providing roost habitat for bats and supporting a more diverse insect population. 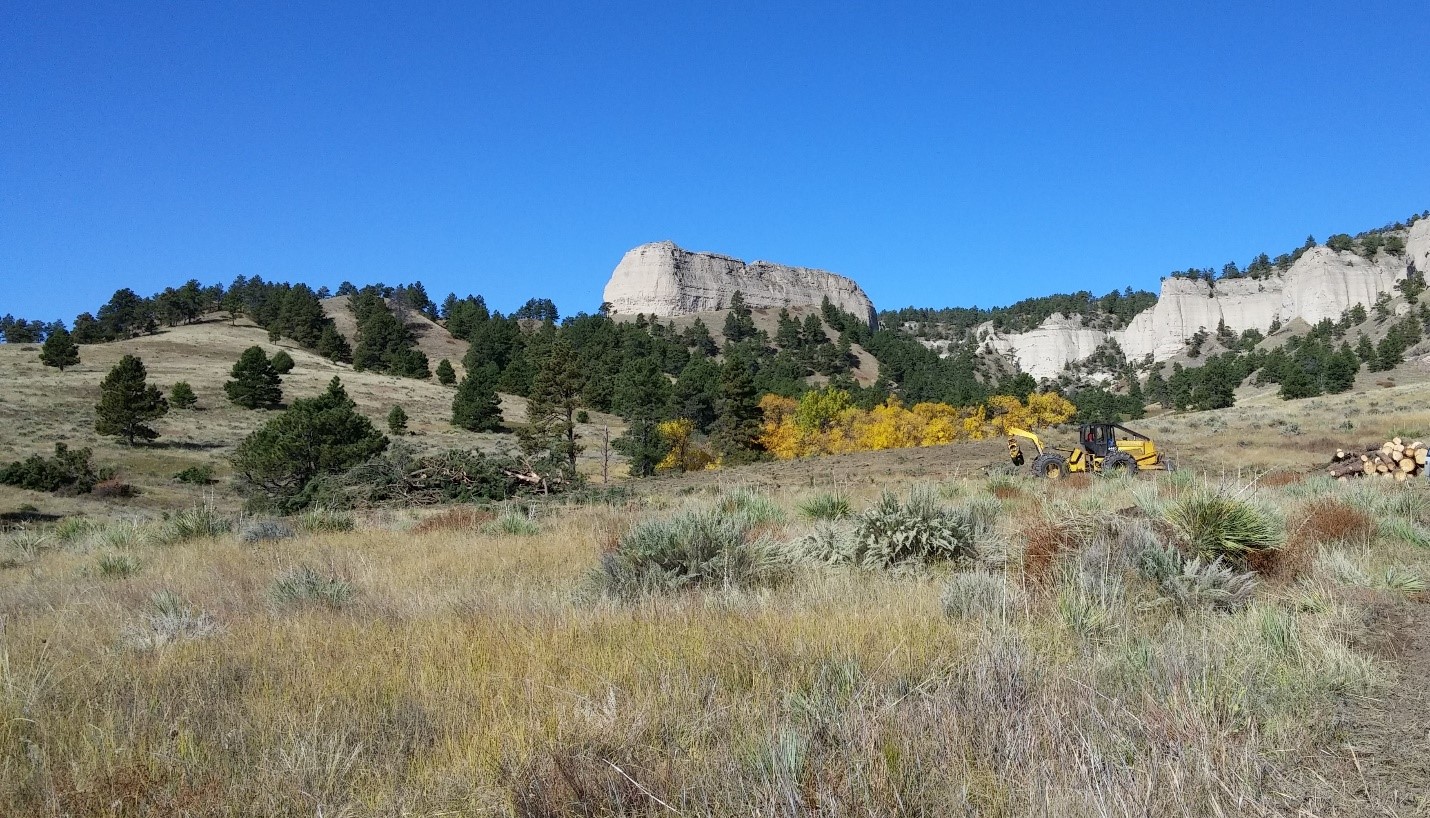 Removal of some of the pine in this drainage will allow deciduous tree and shrub species, like the green ash and cottonwood shown in the photo, to increase. Photo by Erin Divine, Bird Conservancy of the Rockies.

To learn more about this project and the world of bat conservation, visit:

Bird Conservancy of the Rockies’ network of biologists work in partnership with private landowners and federal, state and local agencies to deliver habitat restoration, enhancement and conservation and monitoring across the western U.S. and in northern Mexico.  Click here for more information about our Stewardship program and to find a Private Lands Wildlife Biologist in your area. 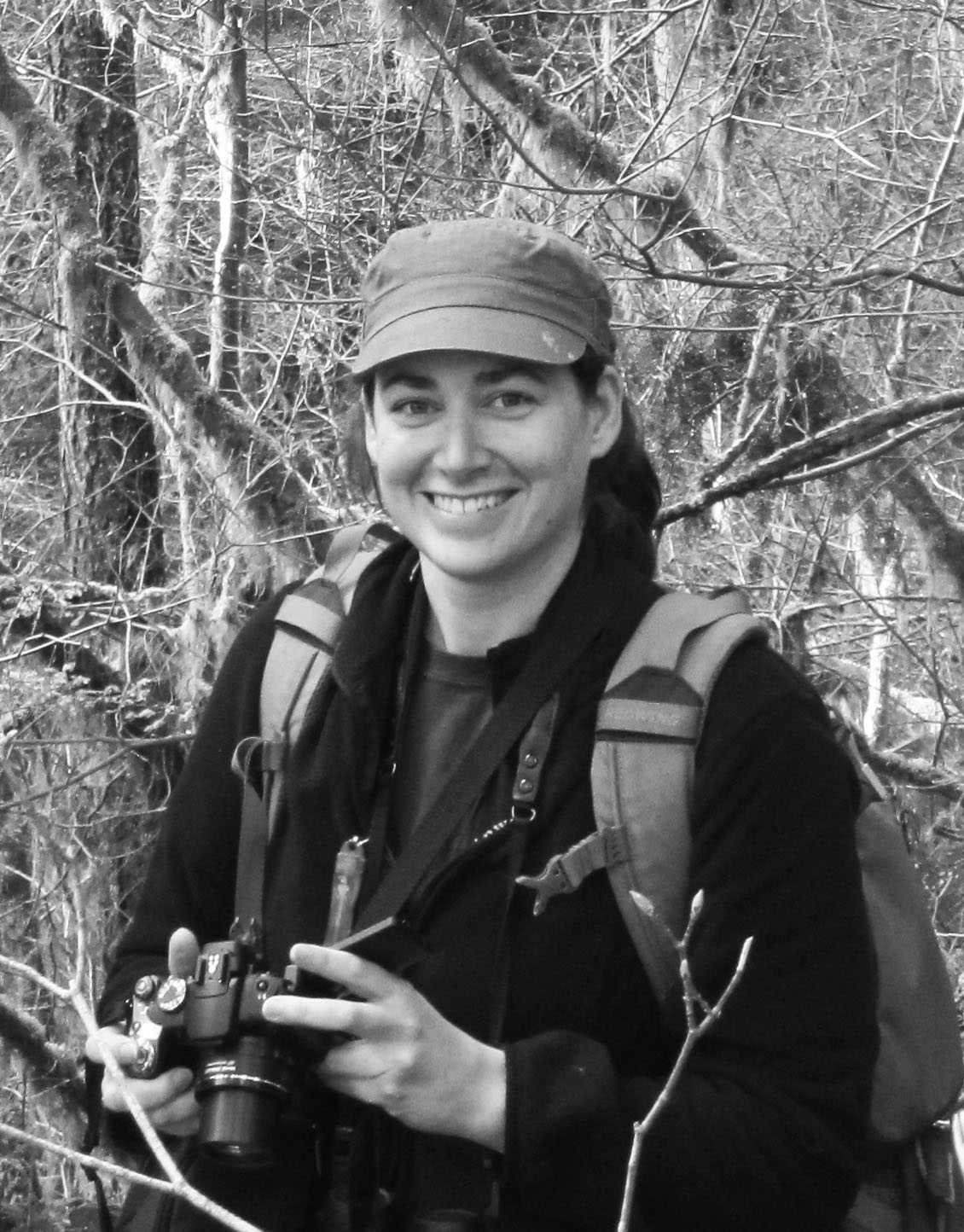 Erin Divine is a former Bird Conservancy of the Rockies Private Lands Wildlife Biologist based in Chadron, NE. This position was made possible with funding support from Nebraska Game and Parks Commission. Her work focuses on “at-risk” species as identified in the Nebraska Natural Legacy Plan, including birds like Long-billed Curlew, Bell’s Vireo and Burrowing Owl.  In addition to bats, she is also involved with conservation enhancements for non-bird species such swift fox and bighorn sheep.  Erin is based in based in Chadron, Nebraska and can be reached at (308) 432-6122  or via e-mail.