What if it were possible to have your conservation cake and eat it too?

Researchers with the USDA-Agricultural Research Service (ARS) are exploring the balancing of objectives associated with economics of ranching, vegetation composition and forage quality of native grassland, and suitable habitat for grassland songbirds, for the perfect trifecta!

In the mid 1930’s, many farms and ranches of the Western Great Plains were abandoned due to drought which resulted in excessive soil loss, aka the “Dust Bowl”. The Central Plains Experimental Range (CPER) was established to research improved management practices for sustainable livestock production on these fragile grasslands, and hopefully prevent future dust bowls. CPER is a beautiful shortgrass prairie landscape adjacent to the Pawnee National Grasslands but dedicated for rangeland research. 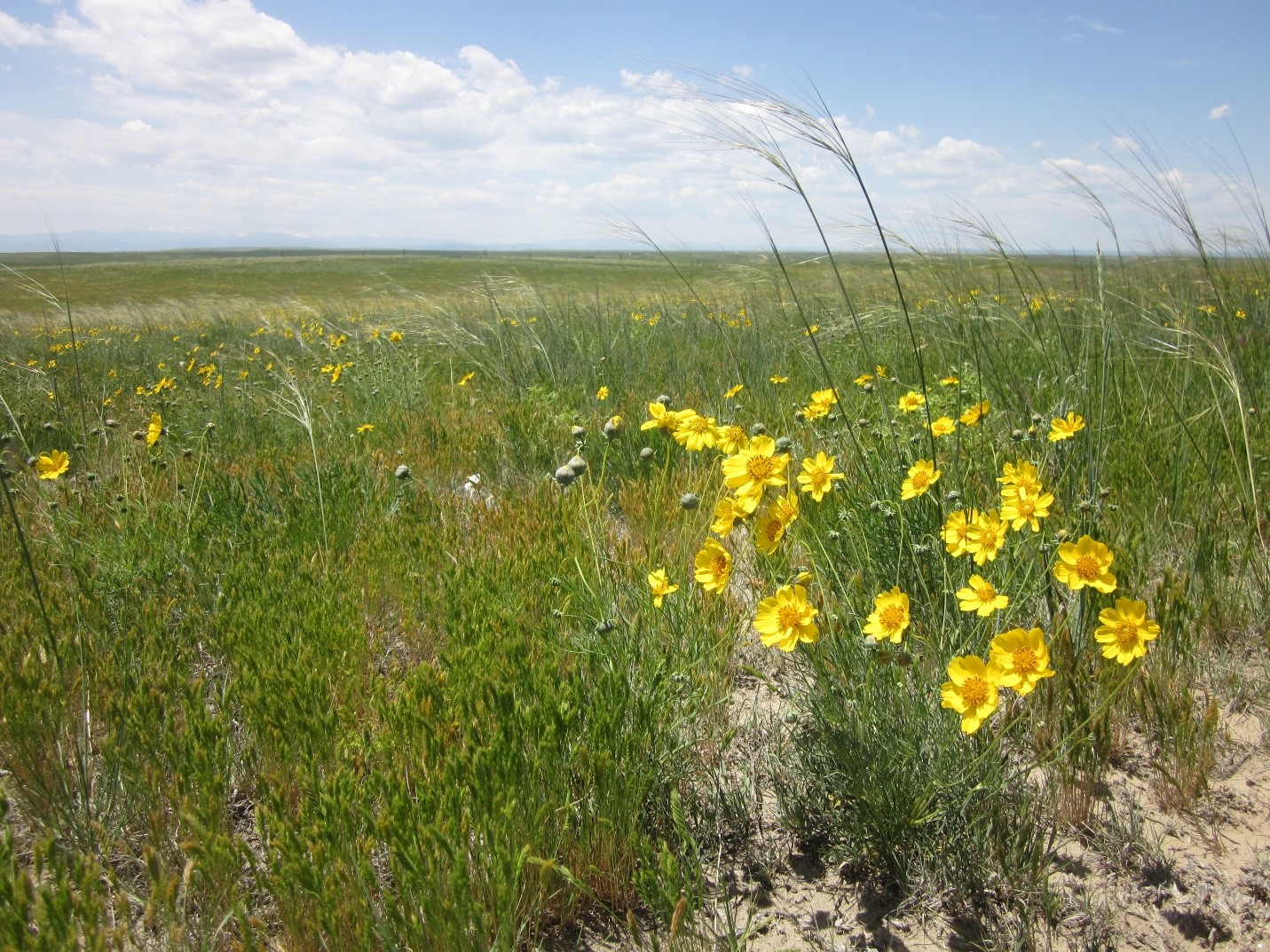 There are many species of grassland birds that rely on this unique landscape for breeding, including Lark Bunting, Grasshopper Sparrow, Western Meadowlark, Brewer’s Sparrow, Thick-billed Longspur and Mountain Plover.  In 2012, we met with folks from several groups to determine if it was possible to achieve quality grassland bird habitat, economically-sustainable and productive ranches and diversity of native vegetation—and do it in a way that could be transferred to the “real world”.  Thus CARM, or  Collaborative Adaptive Rangeland Management, was born. CARM is a 10 year-long study that is entirely stakeholder driven. I have had the pleasure to be a stakeholder representative for Bird Conservancy for a few years and work alongside rangeland scientists with the USDA-Agricultural Research Service and other stakeholders with Natural Resources Conservation Service, U.S. Forest Service, The Nature Conservancy, Environmental Defense Fund, Colorado State Land Board , Colorado State University  Extension, and 4 awesome ranchers from the Crow Valley Livestock Cooperative. 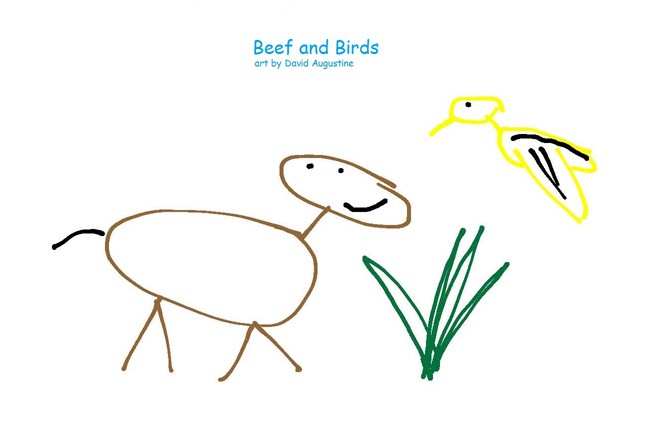 Species like the McCown’s longspur depend on grazing to create breeding habitat, thus working collaboratively with ranchers will ensure a sustainable future for beef and birds! (Drawing by David Augustine)

The main idea behind CARM is to compare differences in vegetation diversity, ranching production and bird species habitat using traditional grazing (uniform number of cattle in each pasture) compared to adaptive, rotational grazing, both at the same stocking rate. Throughout the grazing season, which runs (May-15 to Oct 1), we evaluate whether one or the other could achieve multiple management objectives at the same time. 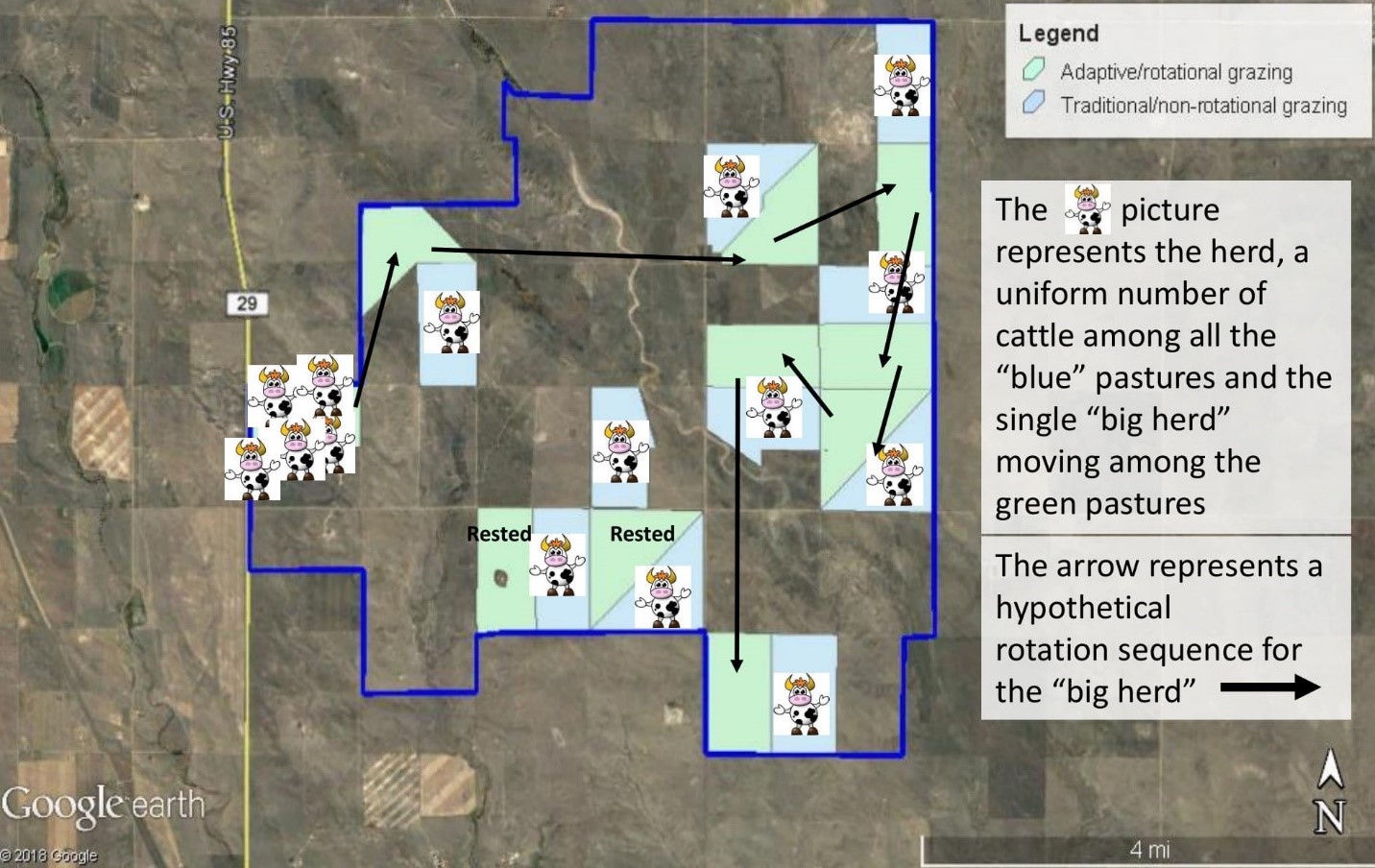 In the traditional management strategy, all 10, 320 acre pastures are grazed season-long with a herd of approximately 22-24 cattle  For the adaptive, rotational grazing strategy, we have one “big herd” of about 220-240 cattle which is moved among eight of the ten, 320 acre pastures in an adaptive grazing sequence using a series of triggers for determining when cattle should be rotated to a different pasture in the grazing sequence.  Thus, we are comparing the same number of cattle grazing with the two different strategies, but with differences including the big herd having a 10-fold greater stocking density (number of cattle per acre) when grazing in a pasture, and the big herd moves among the pastures. We (Stakeholder Group) determine the annual stocking rate (# of cattle), rotation timing and sequence for the big herd, and the movement “triggers” at which cattle in the big herd are moved to the next pasture. Sometimes, cattle will tell us when they are ready to move by nudging fences! Finally, we select two pastures each year that will be “rested”, no grazing for an entire year, as this is our drought risk reduction approach. Whew! 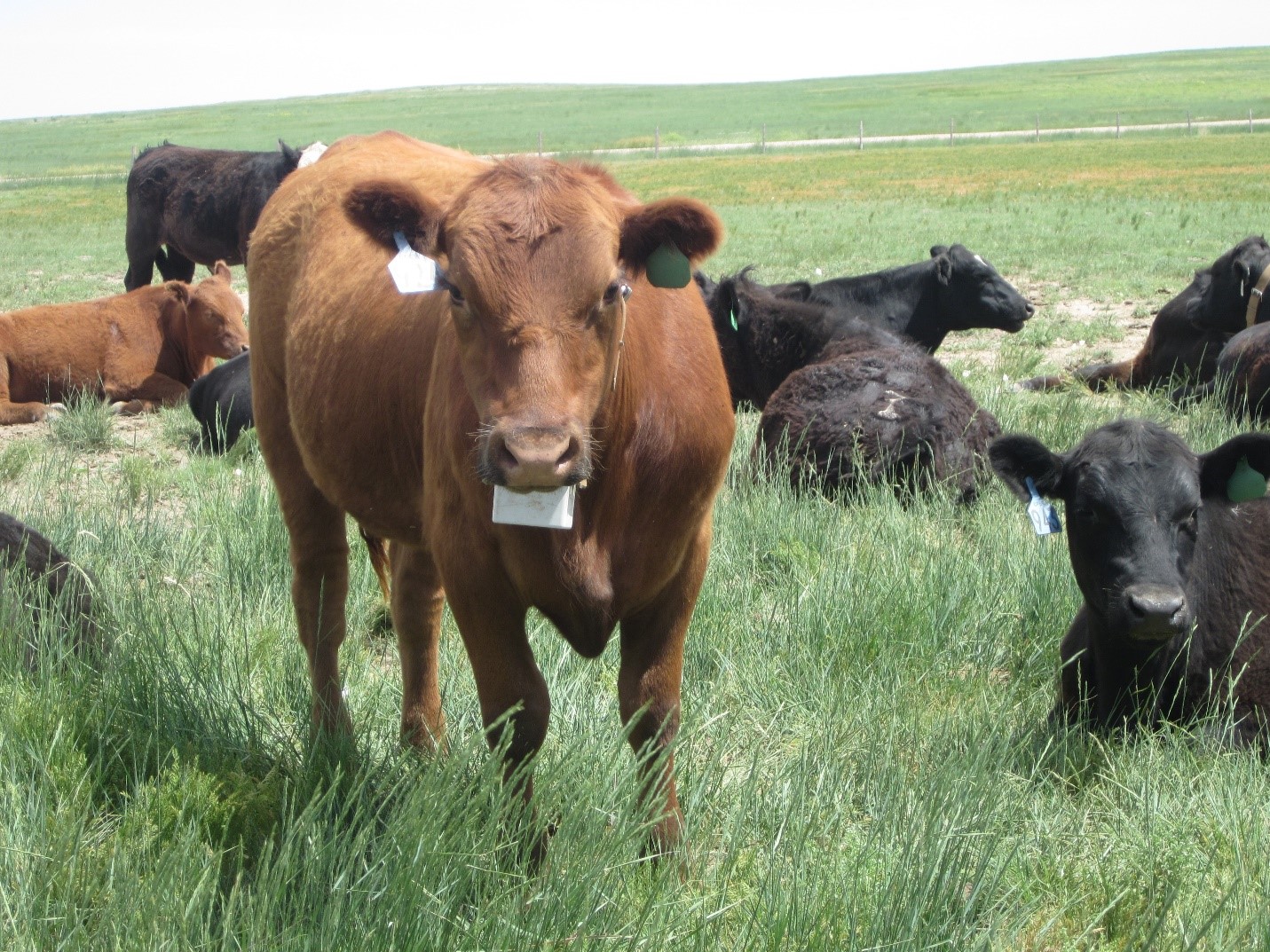 Some cattle are fitted with a GPS collar so we can determine their movement patterns and grazing behavior in the contrasting grazing strategies (Photo by Angela Dwyer).

Each year, rangeland scientists with the ARS collect and analyze data, and the bird data is collected using our Integrated Monitoring in Bird Conservation Regions protocol. They present it to the Stakeholder Group at numerous meetings each year and we make decisions for the next grazing period based on the data. We adapt our decisions based on what the data is telling us as well as incorporating climate predictions. For example, if cattle weight gains are not improving, we can modify which pasture is grazed, when in the sequence and for how long. The same applies with bird abundances. The challenge is how to align the goals of all members in a way that results in balancing ranching, native grasses and forbs, and grassland birds. 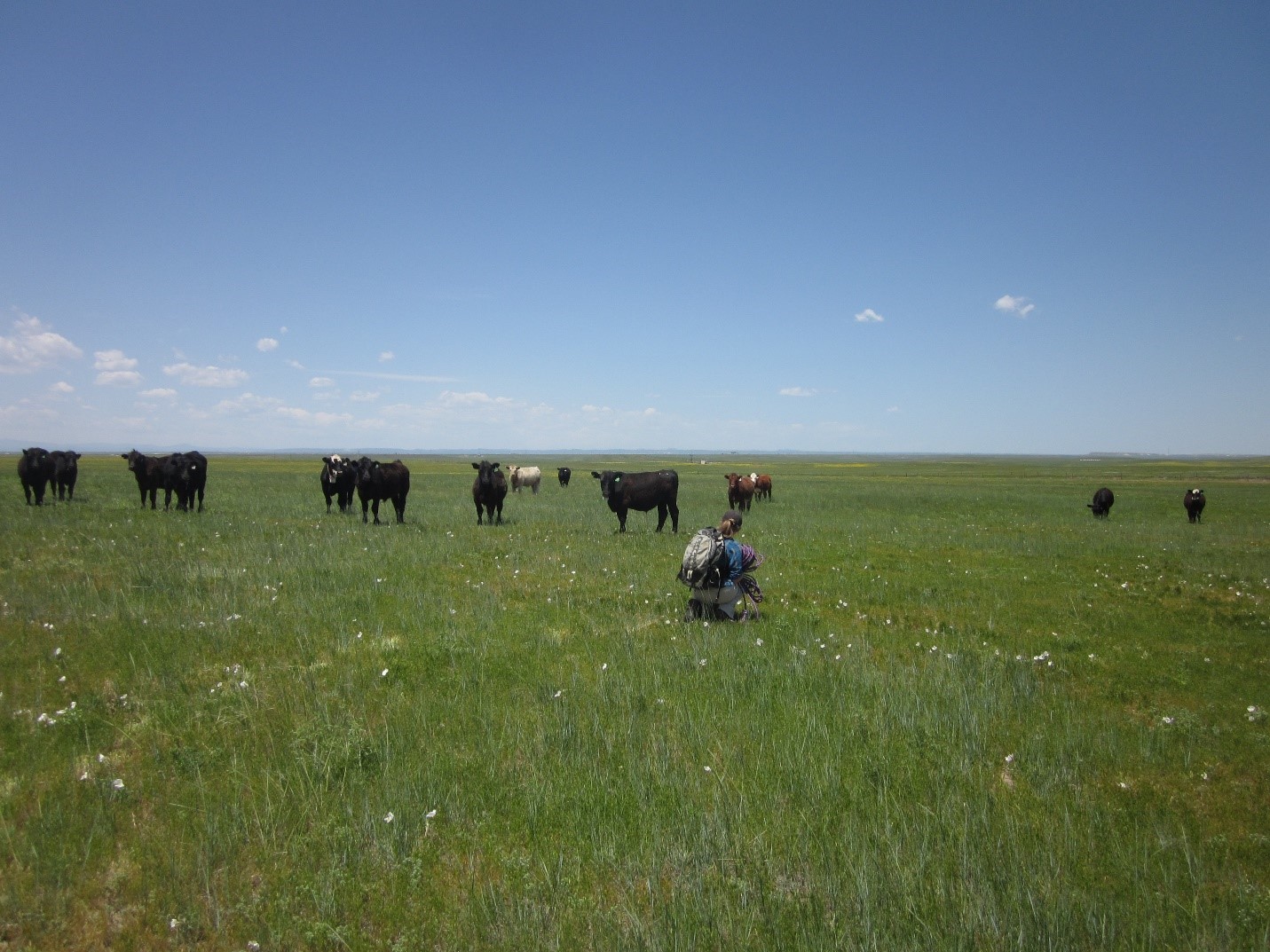 We can now really start to see changes based on our decisions. For example, preliminary data from a student at Colorado State University suggest that heavy mid-summer grazing (July-ish) in pastures historically dominated by McCown’s Longspur, a highly imperiled bird species, may result in an increase in longspur abundance, suggesting our targeted grazing works for this species! The other cool thing about this project is how collaborative it is. We all work well together to make decisions that balance as many of the objectives as possible. When we consider the devastating effects that drought can have on ranching and how livelihoods can be destroyed, the benefits of adaptive management and flexible grazing strategies (e.g., grazing heavier in wet years and lighter when dry) are evident. 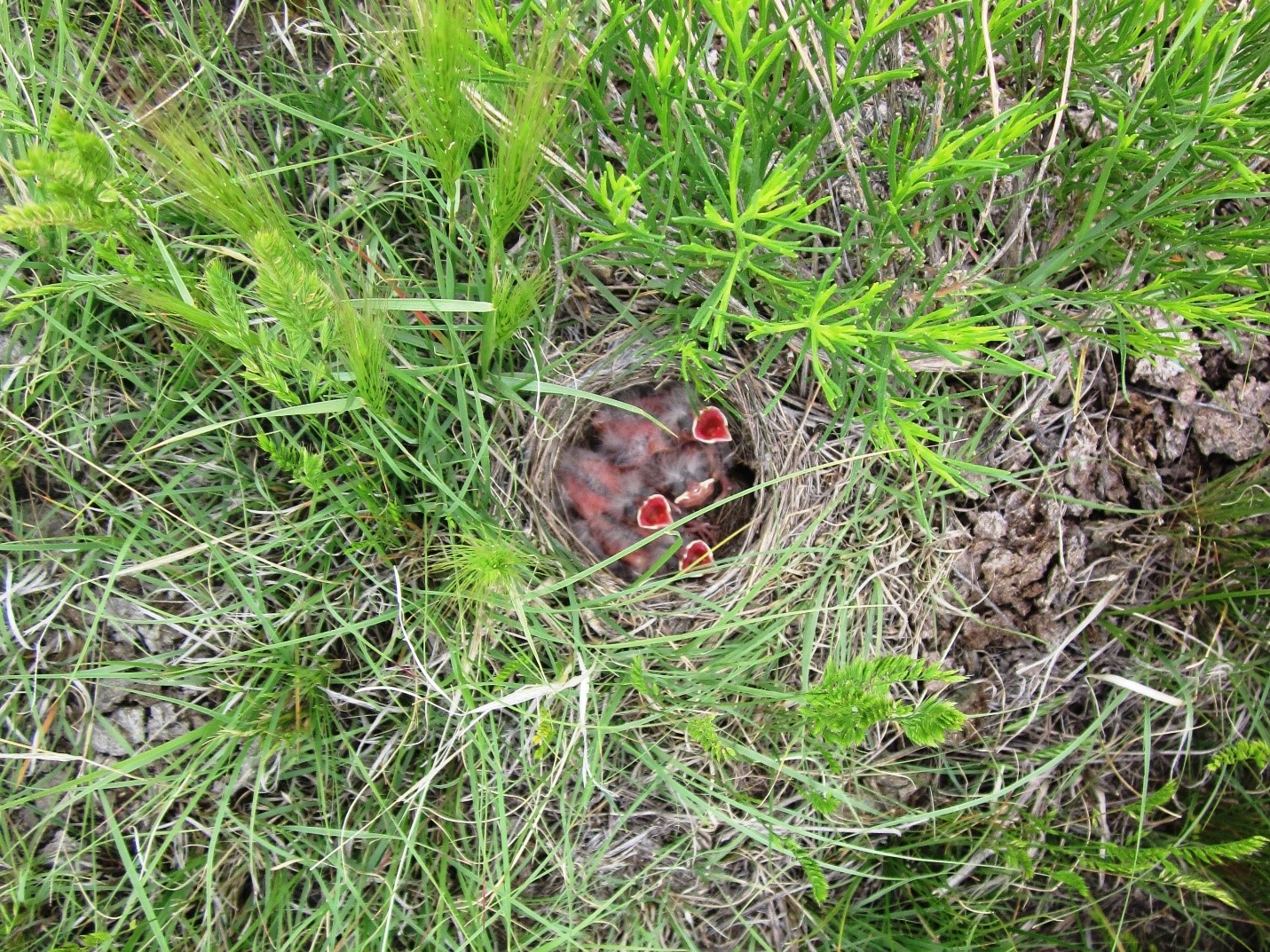 Lark Bunting chicks in a nest at CPER, trampling by cattle is almost nonexistent as they make their nest flush with ground level so eggs are just below the ground (Photo by Angela Dwyer). 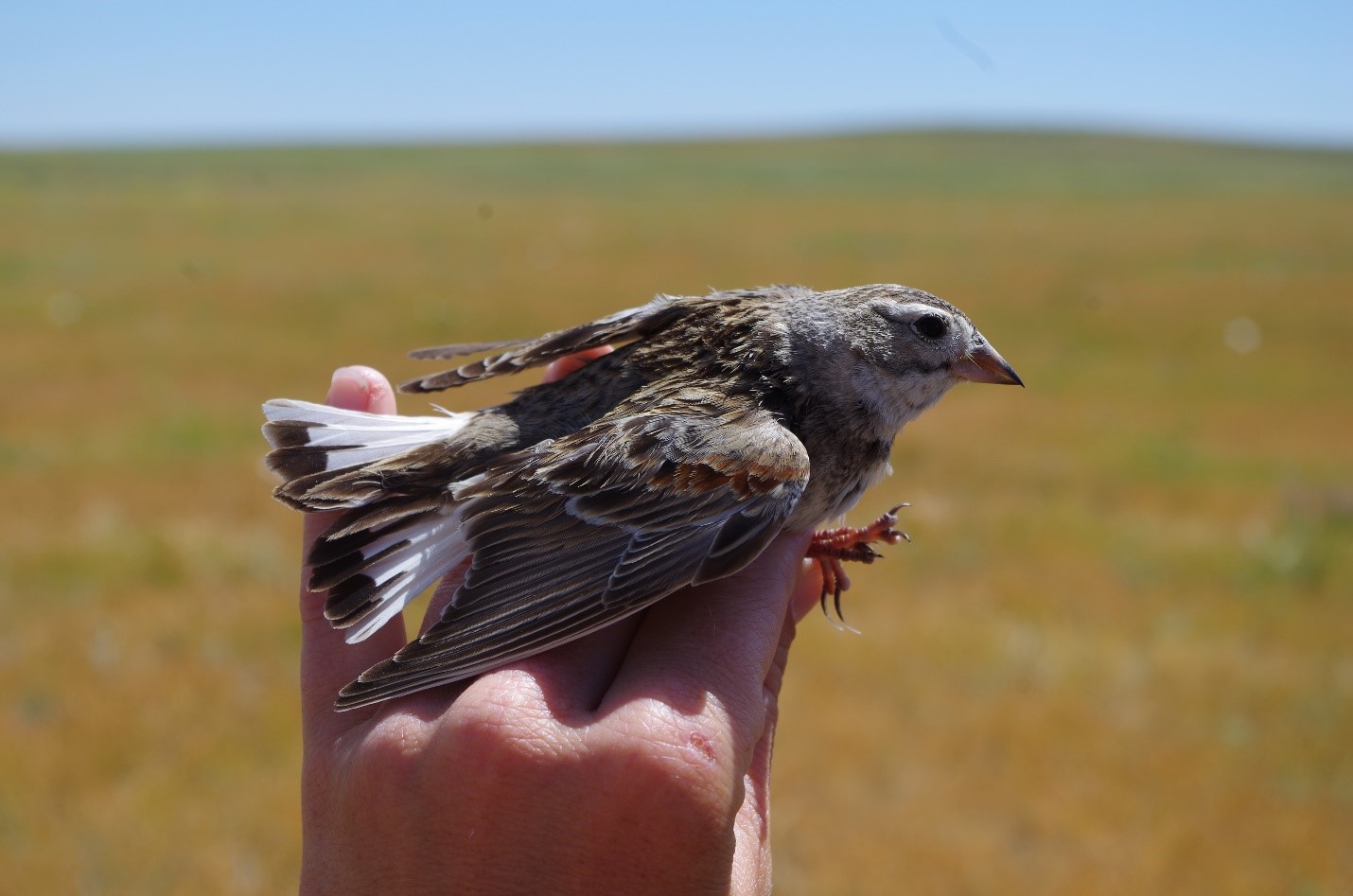 Female McCown’s longspur, banded by Amber Carver. Amber has seen the same individual return to the same pasture four summers in a row! Its unique color band combo tells us who she is! (Photo by Amber Carver). 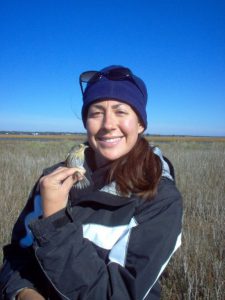 If you want to learn more about this project or how we integrate science into land stewardship throughout the West, contact Angela Dwyer at [email protected]