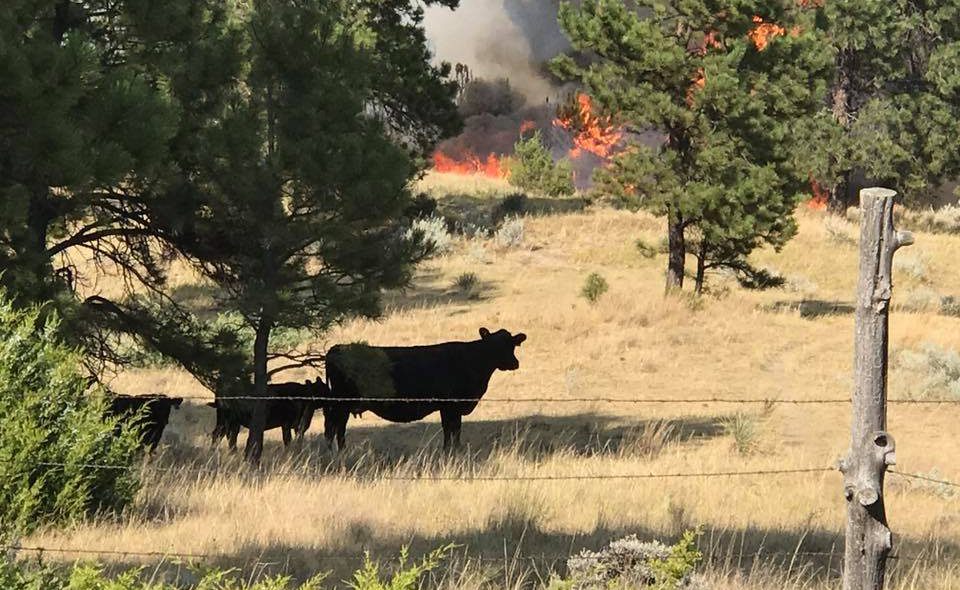 In Central Eastern Montana, the arrival of winter and snowflakes has never been more welcome. 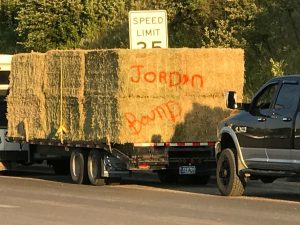 That’s because the region has been under something of a ‘dark cloud’ since summer, when disaster struck in the form of the Lodgepole Complex Fire. By the time the fire was put out, sixteen homes had been burned, along with significant amounts of fencing, haystacks and over a quarter million acres of sagebrush/grassland.

The scope and severity of the fire shook Garfield County and its neighbors to the core, but it also brought together the community and garnered support from citizens all over the nation. For example, hay donations came all the way from the Midwest, along with truckloads of supplies and other assistance from afar.

Unfortunately, the end of fire season did not mean that agricultural producers were in the clear. It was followed by one of the worst droughts ever recorded in the region. With less than half the normal annual precipitation in Garfield County and drought affecting most of the surrounding region, the lack of moisture continued to hurt the hardworking people of Montana who rely on the land for their livelihood. 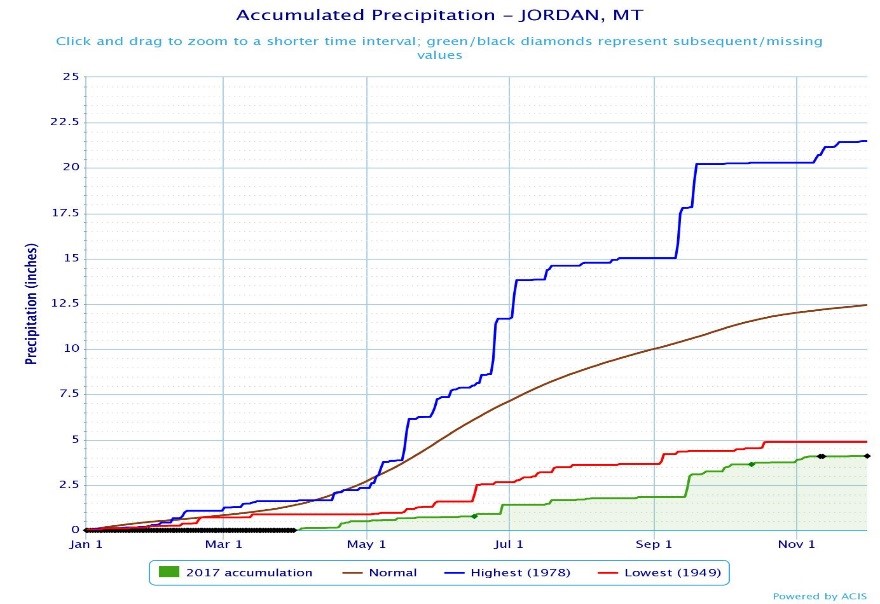 This graph shows the severity of the drought in 2017.

Private Lands Wildlife Biologist Veronica Grigaltchik lives and works at the center of the disaster zone in Garfield County. She is one of 10 Bird Conservancy biologists stationed in rural communities across the Rockies and Great Plains. These biologists and rangeland ecologists work closely with private landowners and other partners to conserve, restore and enhance wildlife habitat through voluntary conservation programs. They use practical approaches that involve helping people manage working lands in more efficient ways to not only improve conditions for birds, but also increase productivity.  Birds are terrific indicators of landscape health, hence the old phrase “What’s good for the bird is good for the herd!” 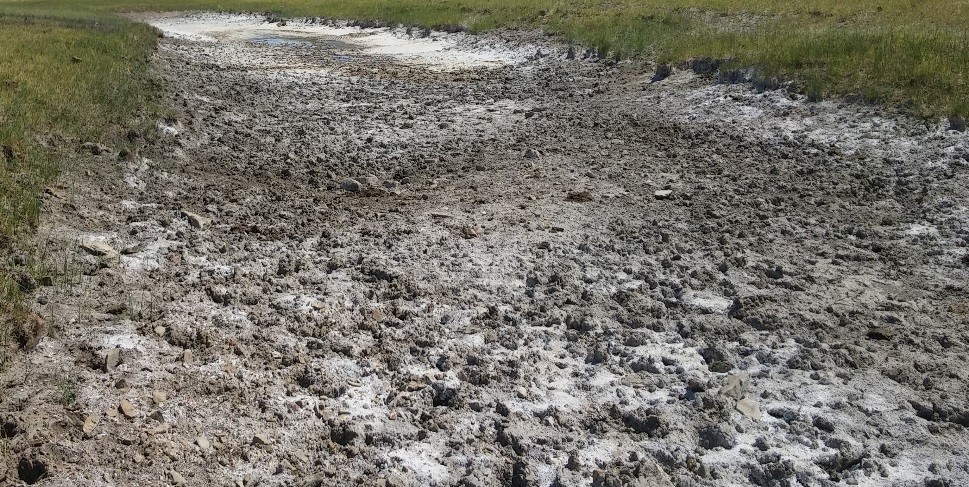 A failed creek left livestock without water at this ranch.  Photo by Veronica Grigaltchik.

Veronica works out of the Natural Resources Conservation Service (NRCS) office in Jordan, Montana, which was on the front lines of the fire incident as it unfolded. A key part of her usual role is providing technical support and advice to landowners on things like water management, grazing practices and assistance enrolling in conservation programs under the Farm Bill.

In response to the fire and subsequent drought, many ranchers enrolled in programs that assisted with the replacement of damaged infrastructure, such as fences and water sources. Veronica helped landowners access federal assistance through initiatives like the the Emergency Conservation Program and the Environmental Quality Incentives Program (EQIP). Eligibility for assistance requires ensuring that new infrastructure meet quality standards and specifications, confirming the original equipment was damaged beyond repair, and that improvements are feasible and will yield the desired results. Some installations are quite technical in nature—involving specialized equipment like solar panels, pipelines and holding tanks. Veronica worked closely to help landowners get equipment installed and provide water for livestock in areas where typically reliable water sources had given out. Some improvements benefited birds as well as people. For instance, old fences burned by the fires were replaced with wildlife-friendly fences with markers that are more bird friendly.

Unmarked fence consumed by the fires (left) has already been replaced with new, marked fence (right). These markers have been shown to reduce bird mortality as a result of collisions with barb wire.

In some ways, the fire has encouraged timely conversations about conservation and land management approaches. During disasters, people often don’t think about wildlife. However, huge numbers of animals—including deer, pronghorn and elk—were also displaced by the fire. In some cases, the emergency necessitated that livestock have access to habitat normally set aside for wildlife. Hunting is a huge part of the Montana way of life and an economic driver for many communities, and hunters arrived in large numbers this year. Finding solutions that meet everyone’s needs in the midst of the crisis can be challenging.  Ranchers also voiced concern about birds, noting that many grassland and shrubland birds were seeking water at stock tanks. Fortunately, new water tanks in drought-afflicted areas have been fitted with wildlife escape ladders to prevent accidental drownings. 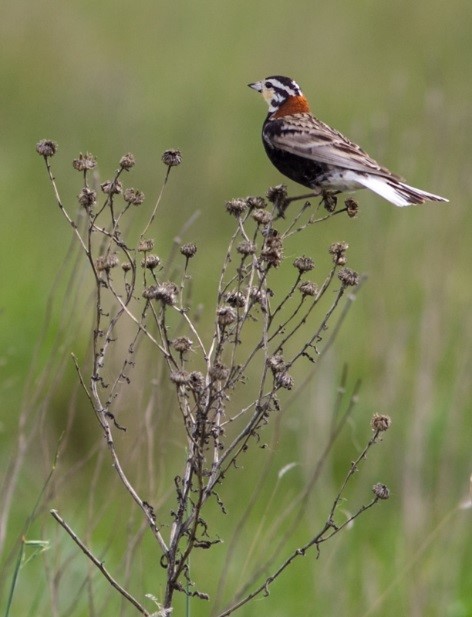 Many ranchers call this part of the world “next year country” which is especially apt in this situation, since we won’t really know until next year how quickly these fire-ravaged landscapes will recover. Responses to disasters are a critical, ongoing process—and the full effects may take time to really be understood.

A key discussion among practitioners post-fire has been grazing management of burned areas and the need for reseeding. Weeds can be opportunistic colonizers after a fire, displacing grasses and sagebrush. As part of voluntary conservation programs, many ranchers have agreed to defer grazing for at least a year following fires to giving desirable plants a chance to rebound, but if weeds become a problem then grazing may actually be a useful tool for weed control. By closely monitoring conditions and using adaptive management strategies, we can respond to ongoing needs and help repair the land.  As everyone works together to create a more resilient future, there is hope for both agricultural producers here and the birds returning to breed in the spring.

If you would like to make a donation to support victims of the Lodgepole Complex Fire, visit the Garfield County Fire Foundation Relief Fund.

To learn more about Bird Conservancy’s Stewardship program and locate a Private Lands Wildlife Biologist near you, click here.

Thank you to our partners who make this work possible: National Fish & Wildlife Foundation, Montana Fish, Wildlife and Parks, and the Natural Resource Conservation Service.

Veronica Grigaltchik is a former Bird Conservancy of the Rockies Private Lands Wildlife Biologist based in Jordan, MT. This position was made possible with funding support from NRCS and the National Fish and Wildlife Foundation and MT Fish Wildlife and Parks.