GIS – an acronym for Geographic Information Science, or Geographic Information System – is a powerful technology that scientists use to plan and execute bird population monitoring and conservation projects, with an explicit focus on geographic space. Bird Conservancy of the Rockies employs two full-time GIS staff who use this technology to support our research and monitoring efforts by generating maps and spatial products that can be used in management and conservation planning. 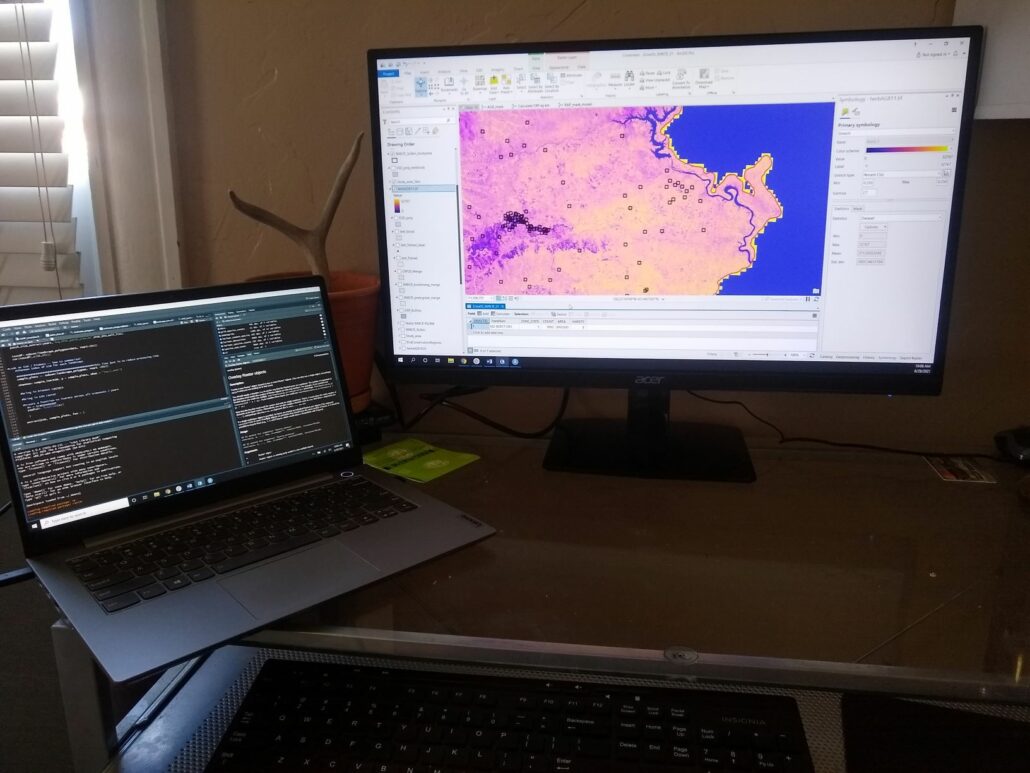 At its most basic level, a GIS is a collection of maps called ‘layers’, each one showing a different type of data about a location. For example, a single GIS layer might include information about elevation, another layer might include type of vegetation, and additional layers could include information like forest cover, the distribution of invasive plant species, rainfall, the density of roads and human development, or almost any other environmental factor that might influence habitat quality for birds – the list is endless! By compiling layers, biologists use GIS to view and analyze how all of these environmental factors influence habitat and the distribution of birds across the landscape. 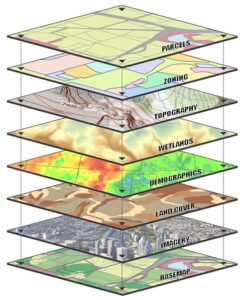 In recent years, advances in remote sensing technology (for example, satellites taking photos of the Earth), computational power, and the power of the internet to store and distribute data mean that biologists can easily obtain detailed information relevant to bird habitats across the entire United States and beyond. For example, data on elevation, vegetation cover, climate and precipitation, soil type, and fire history are now publicly available. Many of these datasets are super high resolution, which means that detailed environmental data are available at very small scales (i.e., 100 ft x 100 ft; roughly the size of a baseball diamond) across the scope of an entire continent or a specific Bird Conservation Region). These spatial data are an essential component of Bird Conservancy’s work.

Our Bird Conservancy science team uses GIS in a variety of applications. For example, we developed species distribution models for the South Dakota Breeding Bird Atlas. Species distribution models produce maps of where a bird species is likely to be found, based on how that species responds to different attributes of the landscape. By comparing and combining these models for numerous species of conservation interest, Bird Conservancy can identify biodiversity hotspots and prioritize specific areas of importance for conservation action across the Northern Great Plains. We also use GIS to help answer research questions related to bird populations and their habitats. For example, we compare species distributions over time to assess the resiliency and stability of these populations and their responses to conservation actions and environmental change. At a both large and small geographic scales, measuring and visualizing changes in bird habitat requires the use of a GIS!

In order for a scientific survey (such as the Integrated Monitoring in Bird Conservation Regions program) to be meaningful, it must accurately represent the range of landscapes and environmental conditions experienced by birds. For example, in a mountainous region, surveys conducted along roads (which tend to be located in valleys) might not detect bird species that occupy higher elevation alpine environments. Bird Conservancy biologists therefore use GIS to ensure that our bird surveys are spatially balanced, or not biased based on their location.  To accomplish this, we use GIS to divide the landscape into an organized grid, and then randomly select locations where we will collect data. 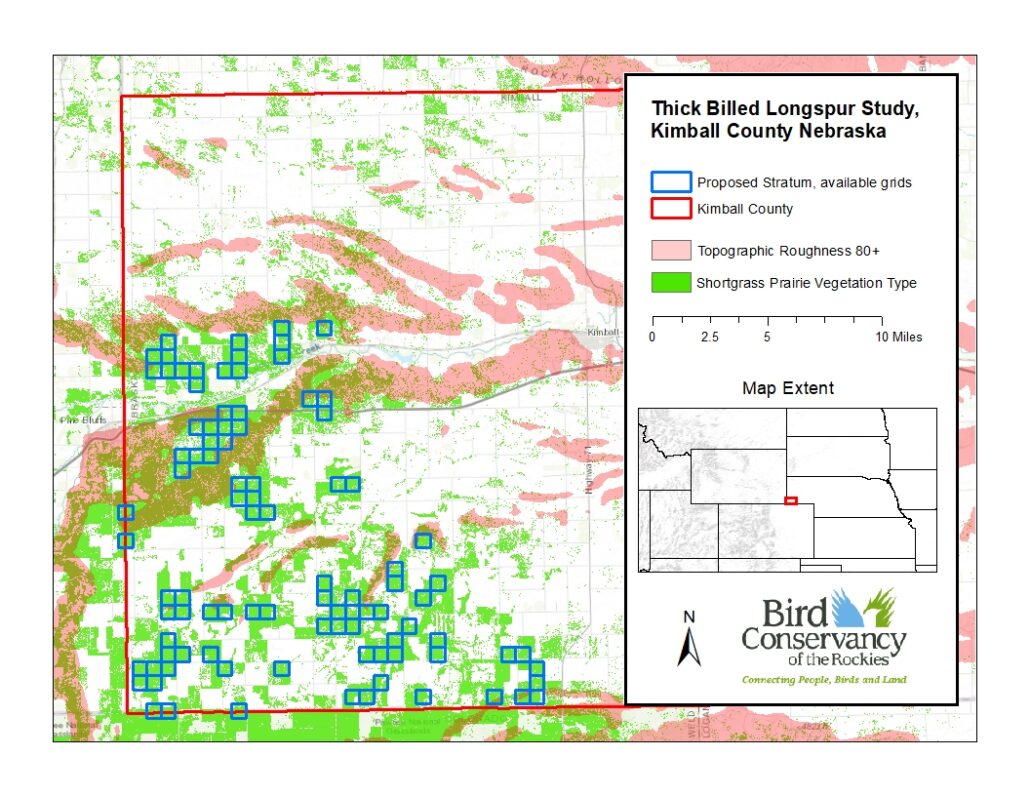 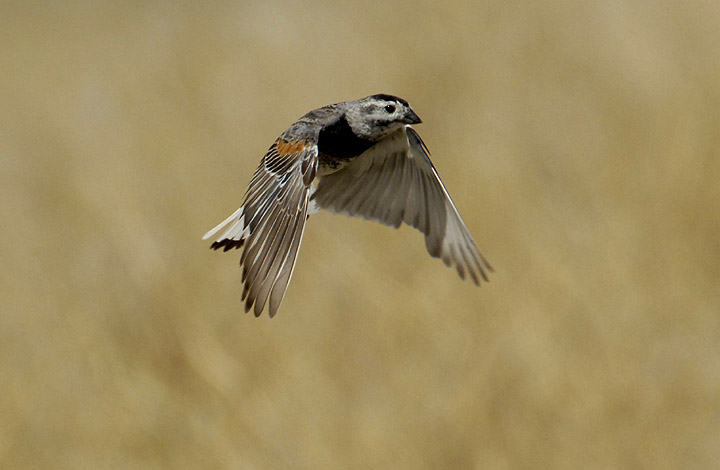 We can also use GIS to restrict where we sample in order to focus on species or conservation issues we are particularly interested in, while still maintaining a spatially balanced design. For example, this spring, Bird Conservancy biologists conducted surveys for the Thick-Billed Longspur in southwestern Nebraska to measure the breeding season abundance of this species. Thick-billed Longspurs are uncommon, so if we had surveyed the entire study area, we would have gathered very little data and would therefore only have a limited understanding of when, where and why Thick-billed Longspurs exist on the landscape. To solve this problem, we used landscape characteristics compiled in GIS to select survey sites in flat, grassy areas with patches of bare ground nearby, where Thick-billed Longspurs are known to breed. By combining GIS layers that included topography, grass cover, and bare ground, we were able to accurately identify Thick-Billed Longspur nesting habitat, and study how this species uses the landscape.

Across the western United States, land managers that are concerned about landscape change spend millions of dollars on management and restoration (e.g., removal of invasive cheatgrass, removal of shrubs and conifers to improve grassland and sagebrush habitat, forest fuel reduction treatments to protect forests from catastrophic wildfire). Understanding the value of these investments requires understanding how conservation projects impact bird populations and where they have the greatest impacts. 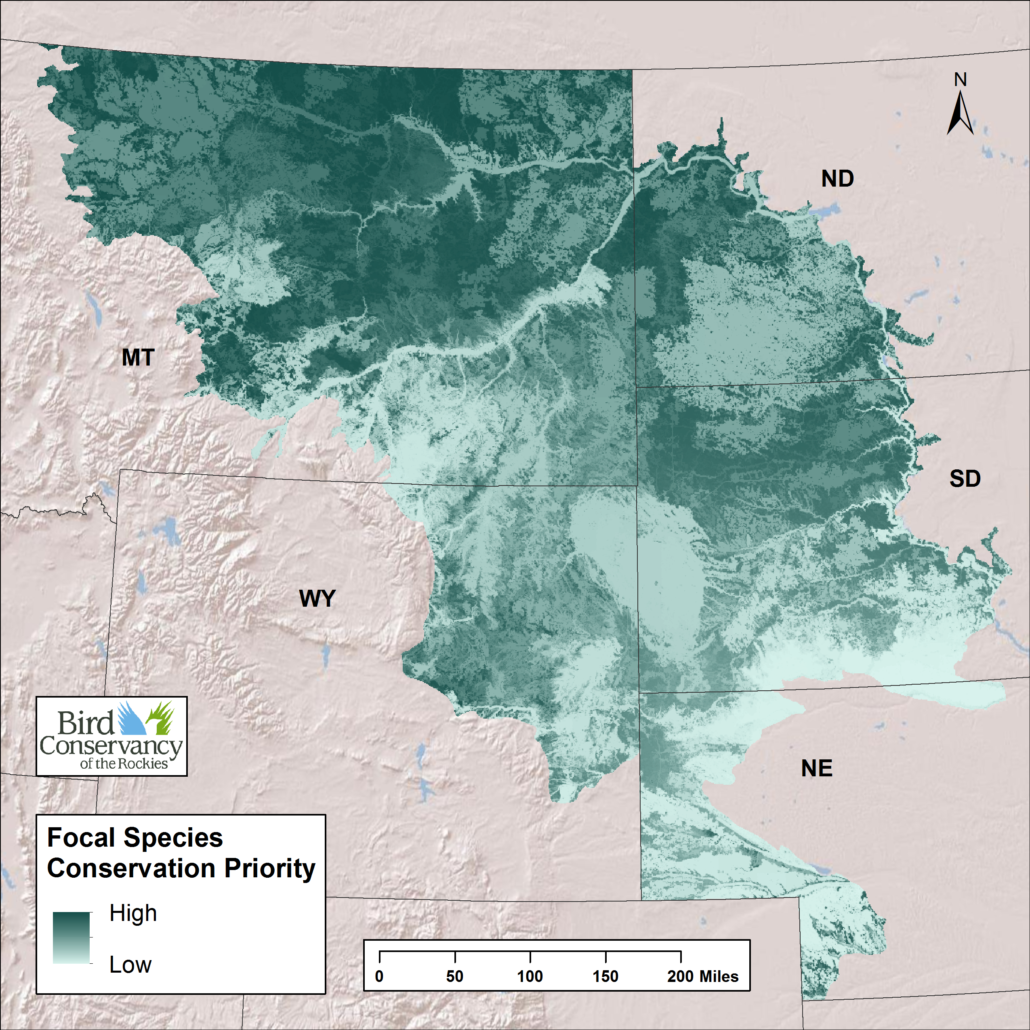 GIS map showing areas of conservation priority based on data from the Northern Great Plains project. Map by Rob Sparks.

Along the Colorado Front Range, Bird Conservancy scientists developed distribution models for bird species that specialize in Ponderosa Pine forest habitat. We measured the associations between the forest structure (i.e., was the tree canopy dense or relatively open?) and the distribution of the bird species we were interested in on the landscape. Then, we predicted how tree removal for fuel reduction would change that canopy structure, and how different bird species would respond to those changes. Then we did the same analysis for a different forest management strategy, restoration of the forest to historical conditions, and compared the predicted outcomes of our two models. In some areas of the Ponderosa Pine forest, both types of forest management (tree removal and forest restoration) reduced the number of bird species that were predicted to use the area, while in other areas, both types of forest management made the habitat more attractive to a wider array of species. By mapping out these predictions in a GIS, it is possible to compare the relative benefits (or costs) of proposed forest management projects across the Front Range for different bird conservation goals. 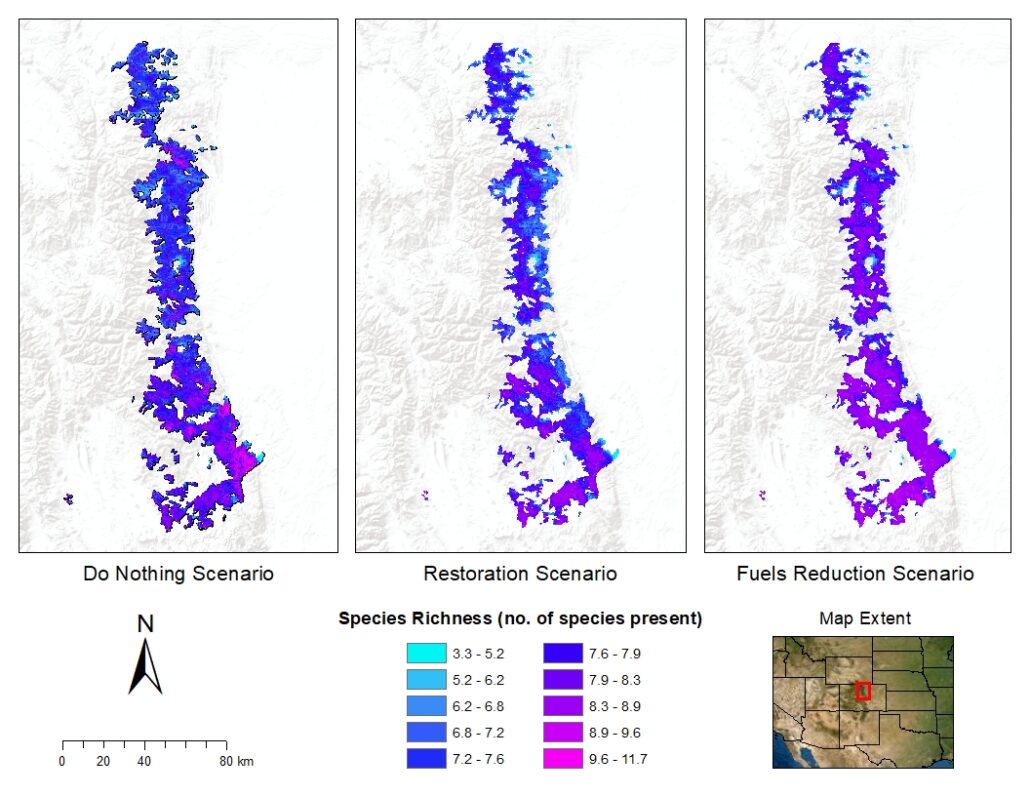 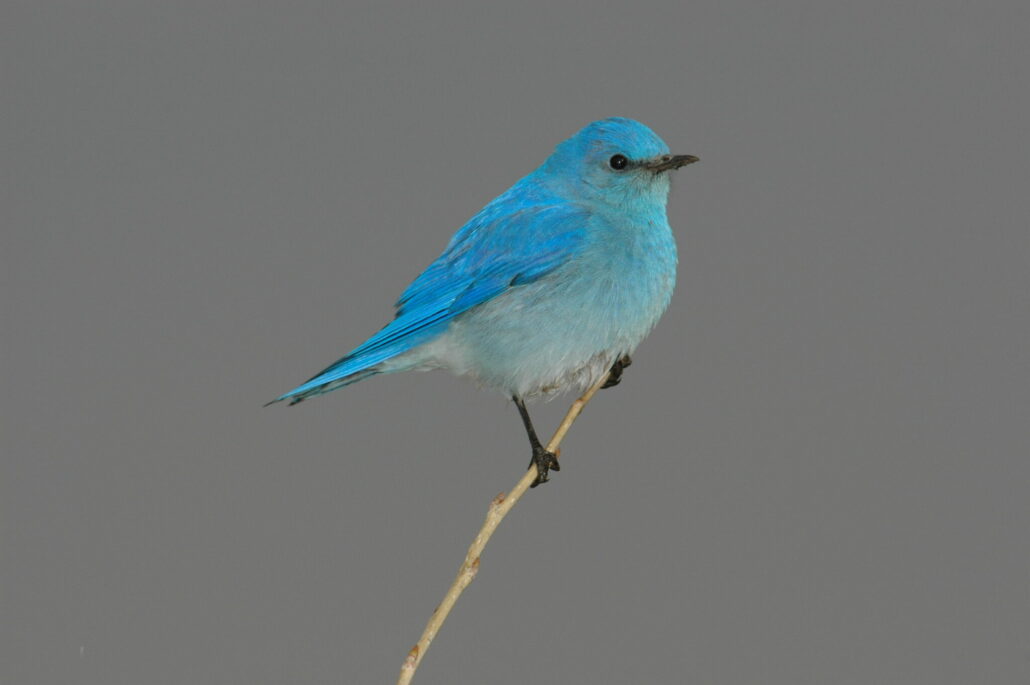 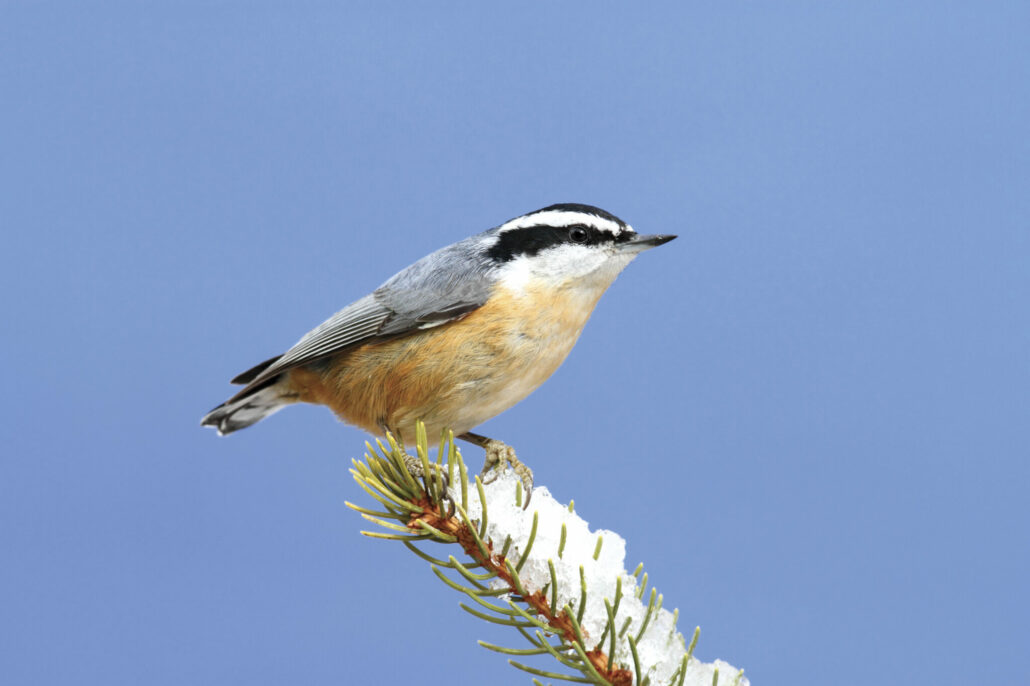 As more and more high quality remotely-sensed data layers become available, the benefits that GIS technologies provide to research and conservation will continue to increase. Although GIS might lack the glamour of conducting a bird survey on a remote mountain peak during the dawn chorus, this technology underpins much of Bird Conservancy of the Rockies’ scientific program. GIS allows us to examine complex conservation issues in a rigorous quantitative fashion, and at a large scale.

Eric Chabot (based in Fort Collins, CO) is a GIS Biologist at Bird Conservancy of the Rockies. All photos and figures were taken/created by the author unless otherwise noted.