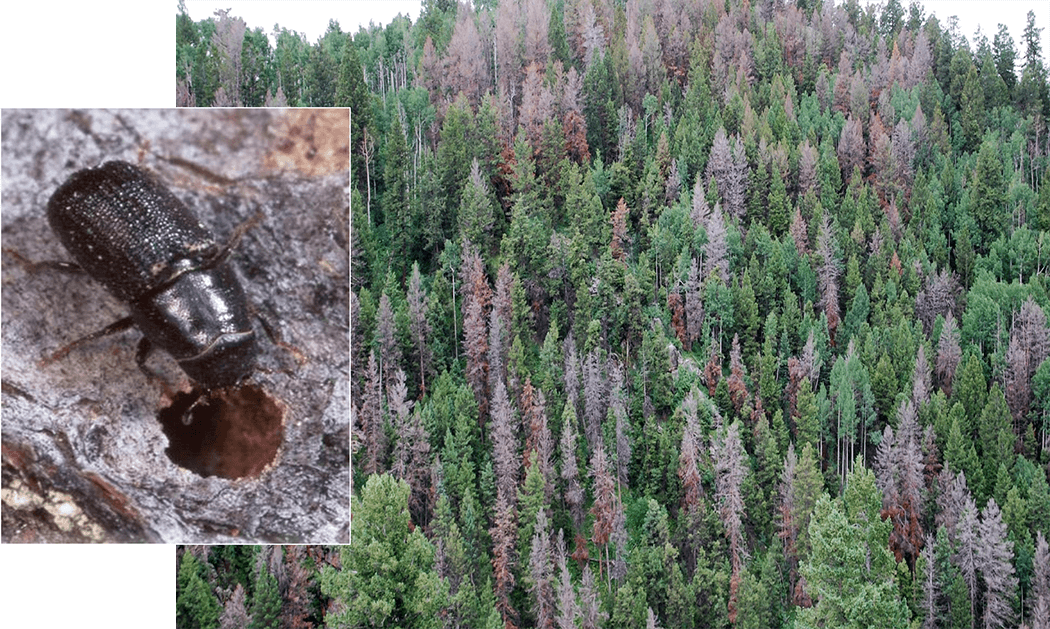 Forests would not be forests without trees, but those of us less familiar with forests may not appreciate how much dead trees (snags) and disturbances that kill trees shape forest ecology and provide habitat for birds and other wildlife. Native bark beetles are a major cause of disturbance in western North American conifer forests. Bark beetles normally attack old, weakened trees—but outbreaks can kill most or all host trees including healthy trees over thousands of hectares—affecting the ecology of impacted areas for a century or more. 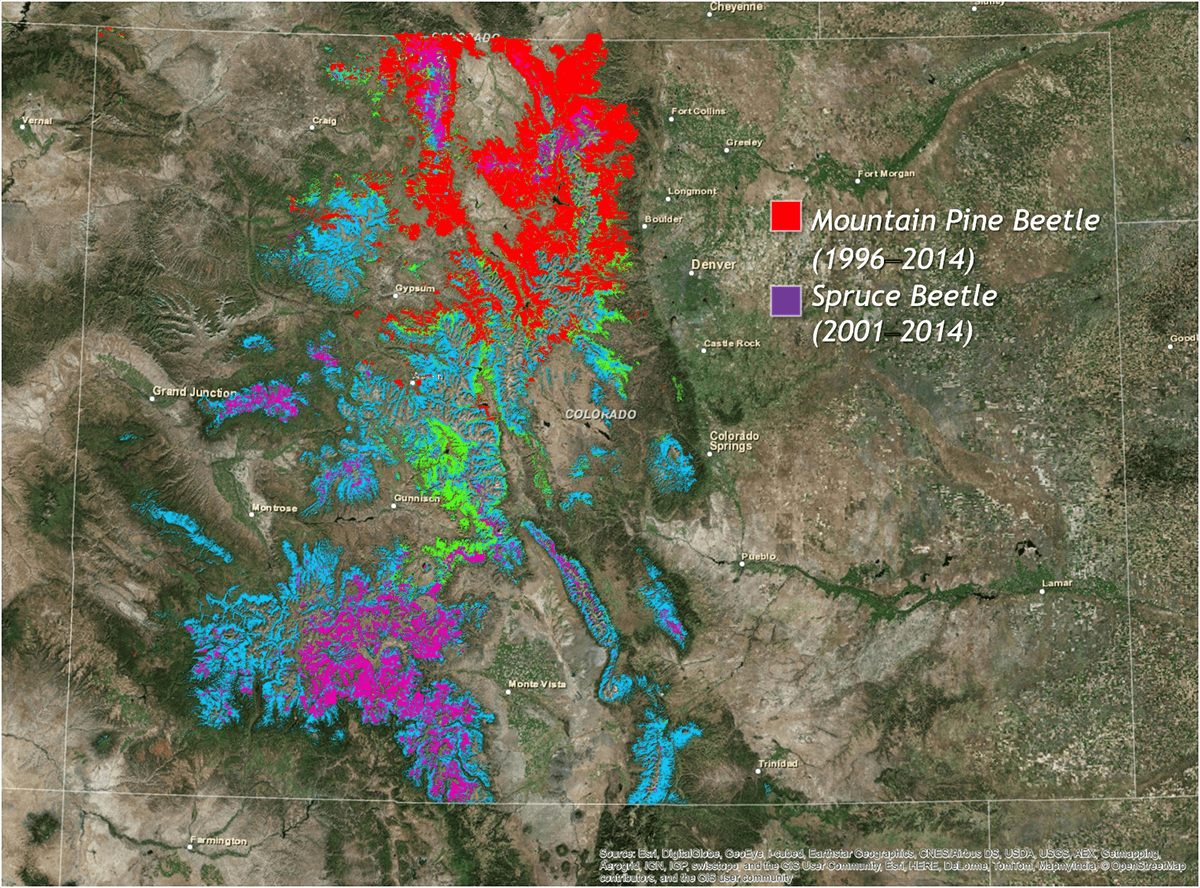 This map shows the enormous extent of Mountain Pine and Spruce Beetle outbreaks in Colorado through 2014.

Although outbreaks may displace some wildlife species tied to mature forests, many species benefit from outbreaks. For example, woodpeckers excavate nest cavities and forage for insects in snags. Other species, in turn, use cavities initially excavated by woodpeckers. Fewer mature trees opens up the forest canopy and provides hunting opportunities for aerial insectivores. Increased shrub and herbaceous vegetation, made possible by increased light, provide nesting and foraging opportunities for species that prefer the understory. Overall, forests shaped by bark beetle outbreaks often provide a greater range of habitat conditions capable of supporting a wider variety of species than would forests without outbreaks. 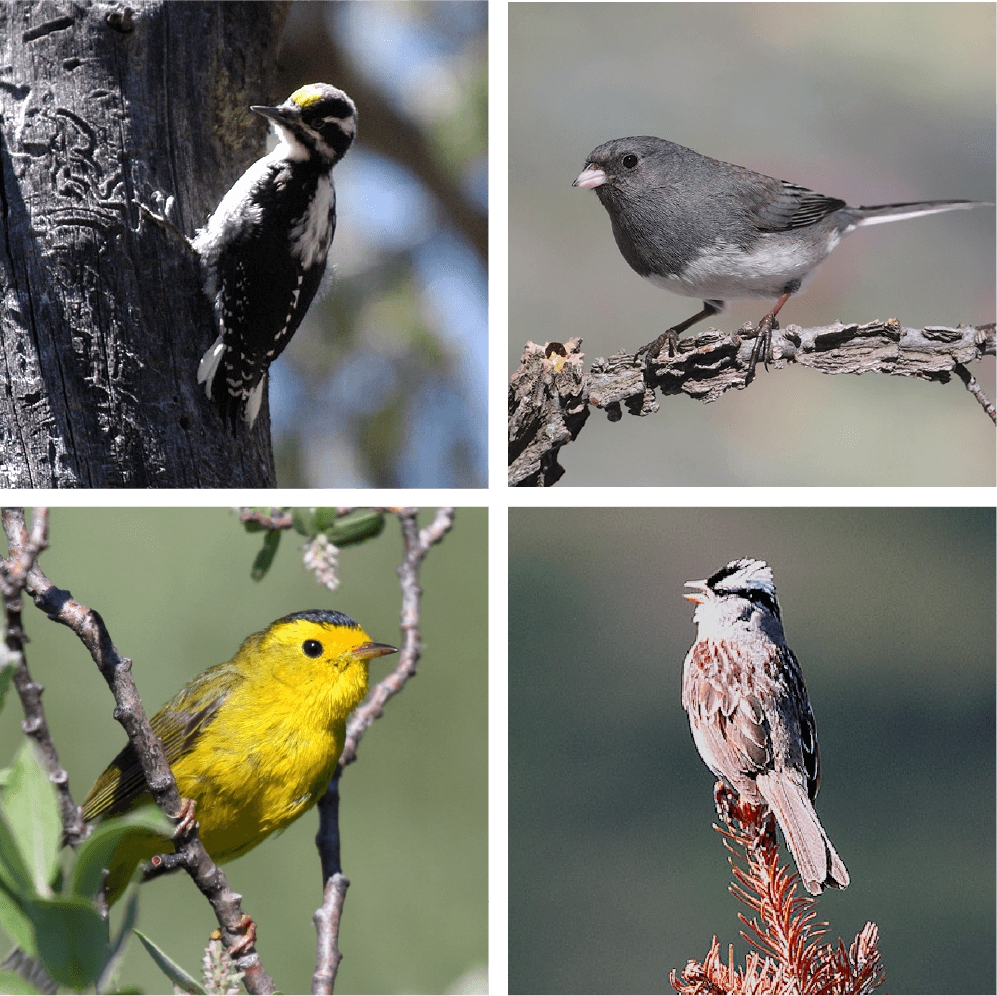 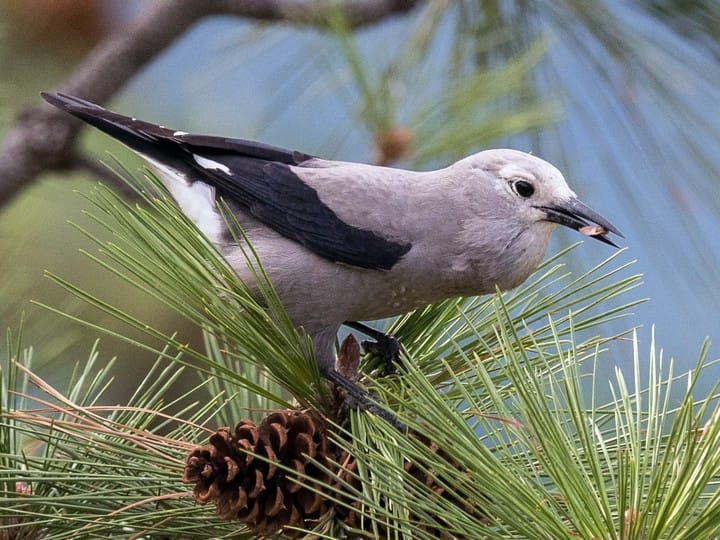 Many species of pine are susceptible to beetle kill, including whitebark pine, which is a critical source of food for Clark’s Nutcracker. Extensive mature tree losses may have a negative impact on the population of this species.

Ecologists link recent extensive waves of bark beetle outbreaks across western North American forests to warming temperatures and ongoing climate change. Whether recent outbreaks exceed historical norms is the subject of ongoing scientific study and debate, but the immediate impacts are noticeable and undesirable to many.  Once-verdant mountain views become a sea of brown and grey, and hiking through forests whose trees are mostly dead can be disconcerting. The extent of these beetle-kill events raises questions about the future. Will impacted forests eventually grow back or will they be transformed into something else? Even those who understand the historical role of disturbance in forest ecology may wonder if recent extensive outbreaks function similarly to historical outbreaks in terms of impacts on wildlife—both positive and negative. 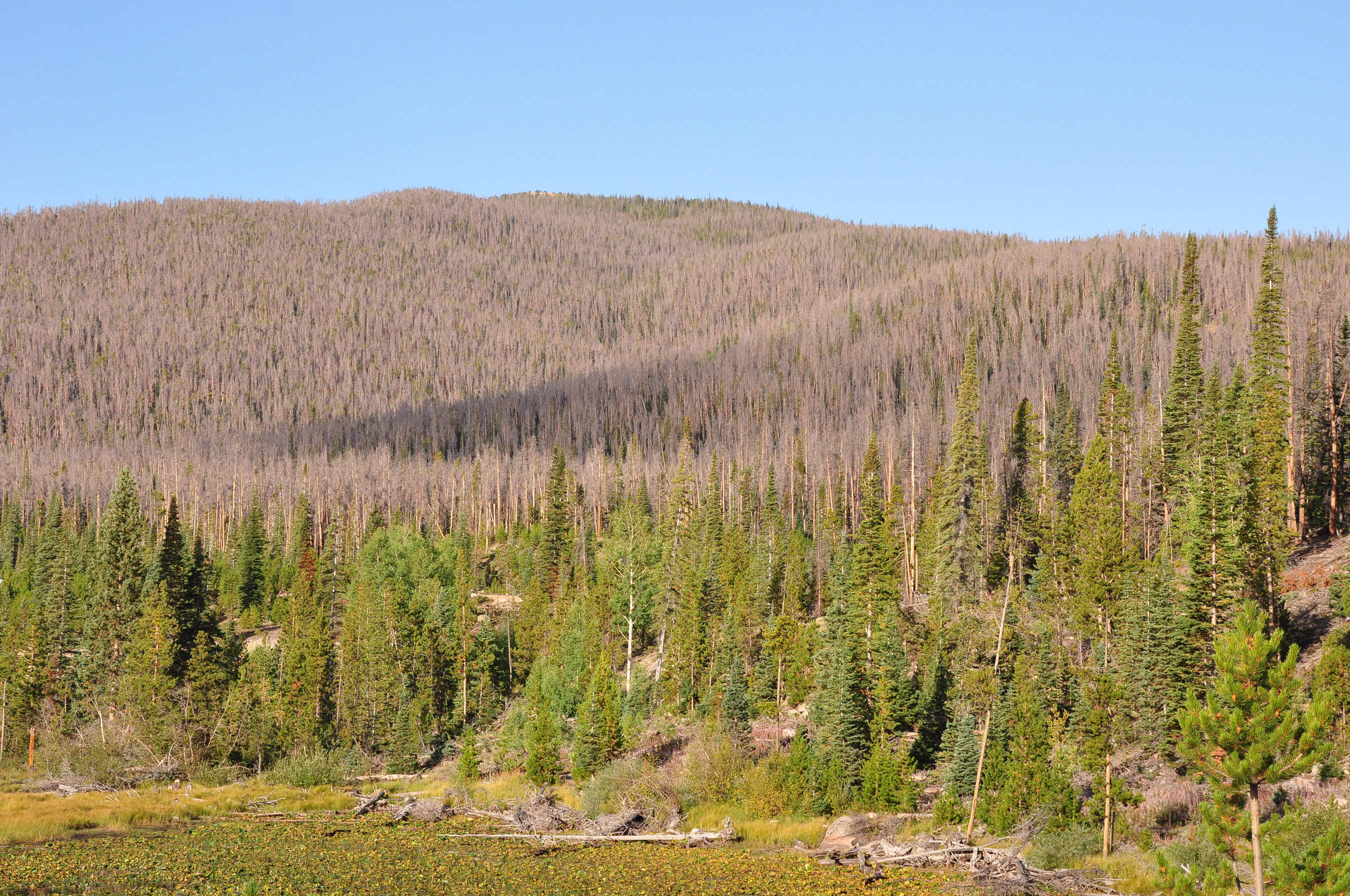 Pine beetle outbreaks can result in dead trees as far as the eye can see.

In Colorado, waves of mountain pine beetle and spruce beetle outbreaks began in 1996 and 2001, respectively. Colorado Parks and Wildlife formed a partnership with the USDA Forest Service and Bird Conservancy of the Rockies (hereafter Bird Conservancy) to investigate how birds are responding to these outbreaks. By 2014 when we began this study, bark beetle outbreaks had affected 1.7 million hectares of lodgepole pine and spruce-fir forests in Colorado. Building off Integrated Monitoring in Bird Conservations Regions (IMBCR; a multi-state partner-based monitoring program administered by Bird Conservancy), we surveyed birds across a wide range of forest stands representing unaffected forests, forests recently subject to outbreaks, and forests affected up to 18 years prior to surveys. 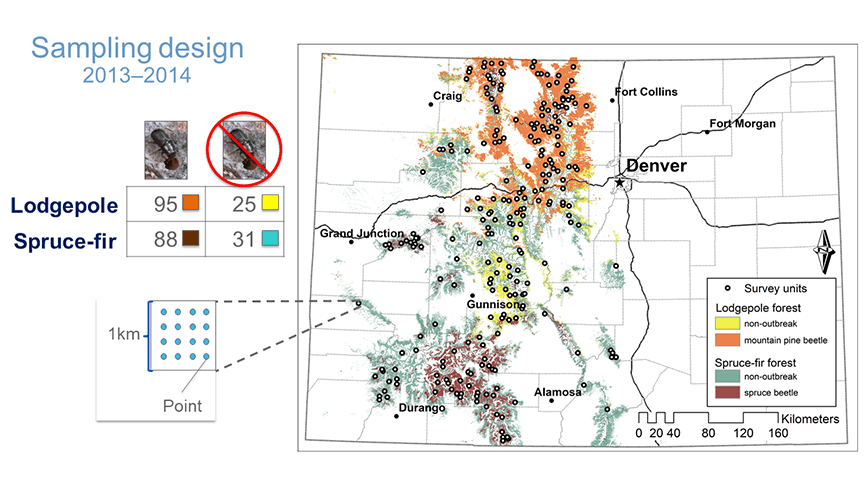 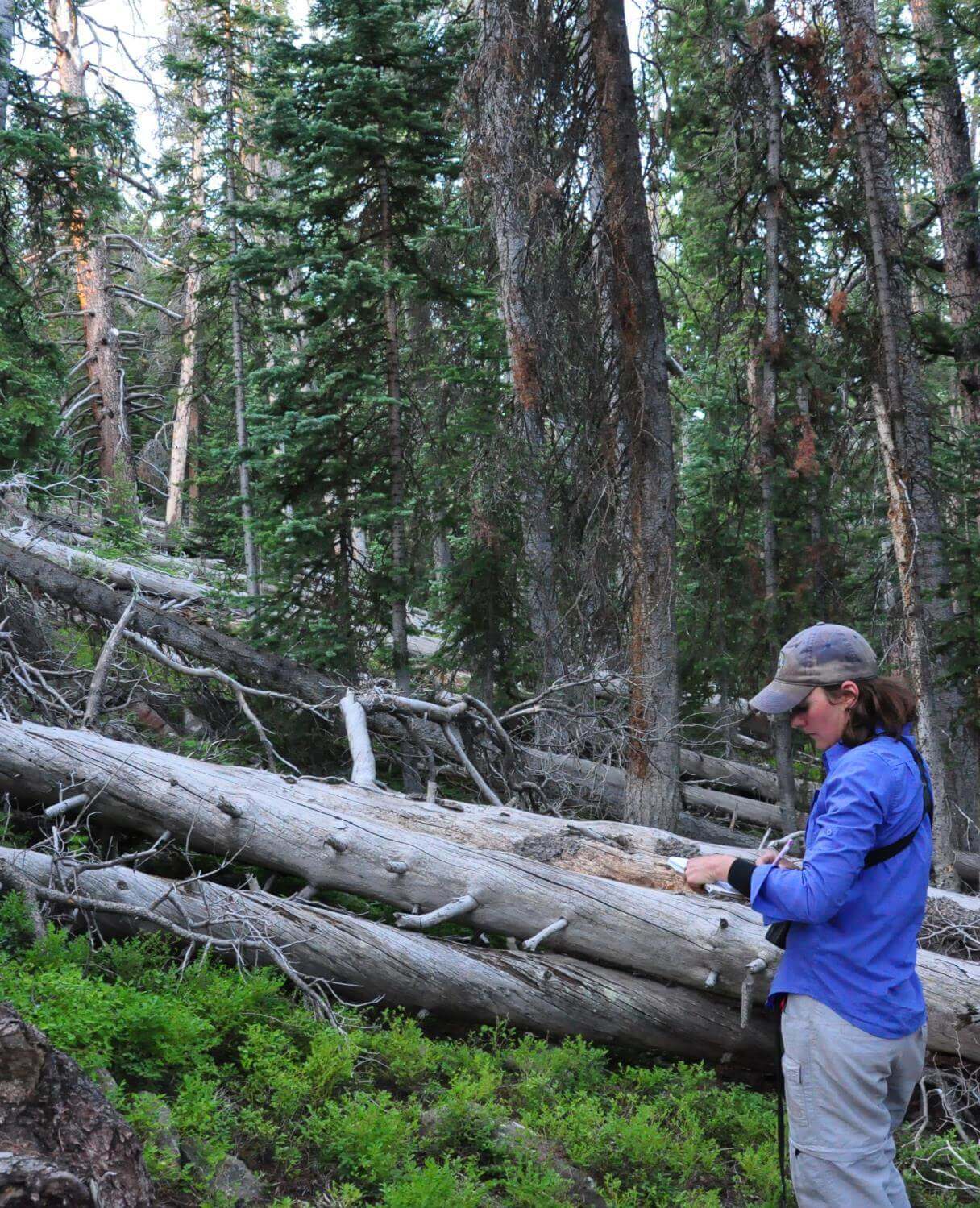 Studying the data from these surveys shows that populations for most bird species were either unaffected or increased following outbreaks. Our results hinted at potential differences between lodgepole pine versus spruce-fir forest. In lodgepole pine forest, bird species richness increased following outbreaks. Lodgepole forests tend to be dominated by that species with high tree density that doesn’t leave much space for other plants, so disturbance has the capacity to open up these forests quite a bit. In fact, historically, disturbances have been important to make room for biodiversity in lodgepole forests. In spruce-fir forest, we found fewer statistically supported relationships, suggesting spruce beetle outbreaks affected birds less there.  Spruce-fir forests start out more diverse—with subalpine fir (which beetles don’t attack) cohabitating the understory—so the impacts may be less pronounced. 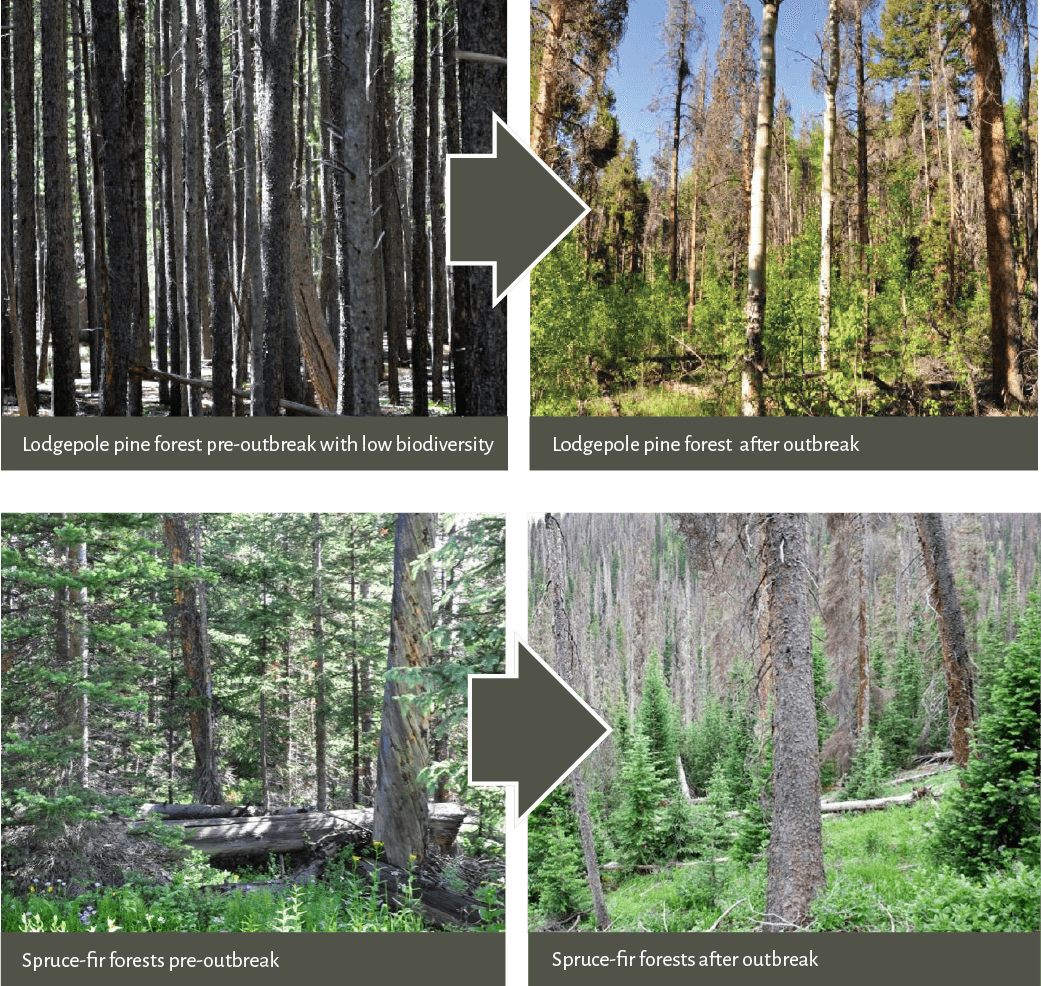 As you might expect, many aerial insectivores and snag-associated species responded positively to outbreak conditions. Perhaps surprisingly, we did not observe many negative results for canopy-associated species, which were expected to be most vulnerable to negative impacts.  In conclusion, we didn’t find any evidence of recent large outbreaks being catastrophically bad for wildlife. In lodgepole forests specifically, there was evidence these events promote overall bird biodiversity in the same manner as outbreaks have done historically, despite their potential increased size and severity attributed to climate change.  However, because it can take a century or more for these forests to recover, long term monitoring is required to fully understand the implications.

This research was made possible with the support and partnership of Colorado Parks & Wildlife and the U.S. Forest Service.