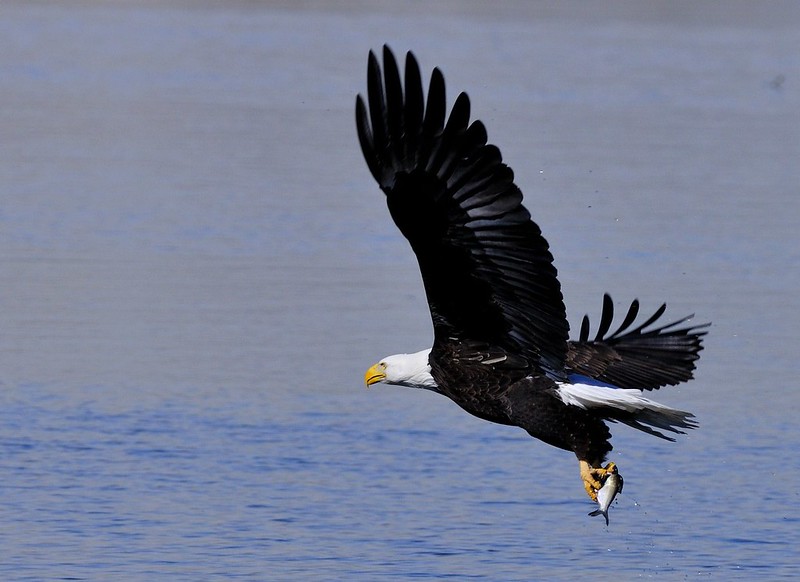 Around 200 pairs of Bald Eagles call Colorado home, with most breeding pairs remaining in the state year-round, rearing their young here in the spring and summer. Why, then, does Colorado’s Bald Eagle population surge to well over 1000 birds in the late fall and winter?

Migration is the obvious answer, but as you might suspect, it’s a bit more complicated than that. Why do some eagles migrate while others do not? We typically think of migration in terms of north or south, depending on the time of year. For many birds, and indeed many birds of prey, that’s largely the case. In the case of Bald Eagles, things aren’t quite as straightforward. Whether a Bald Eagle migrates or stays put probably depends on a number of factors: the age of the bird, where it lives, and the availability of food. These variations in the nature and timing of migration are known as movement strategies. 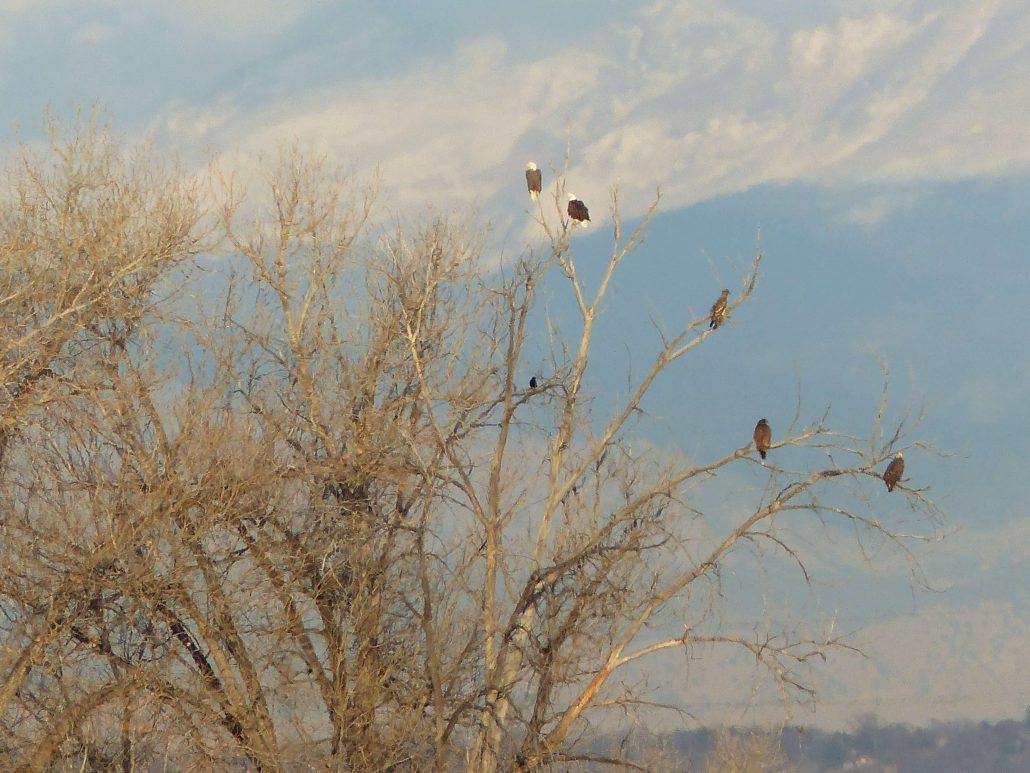 Let’s start with age. Studies of Bald Eagles fitted with satellite transmitters have found that young birds are generally more likely to travel a significant distance during migration, and depart their home range earlier than migrating adults. It is during this first migration or two that young eagles are likely to establish a pattern in their annual movements. Migrating Bald Eagles often retrace their previous migratory routes with each journey, though the distance they travel tends to decline with each passing year until they reach maturity at about five years of age. At that point, where and how far they travel from their home range becomes pretty consistent. 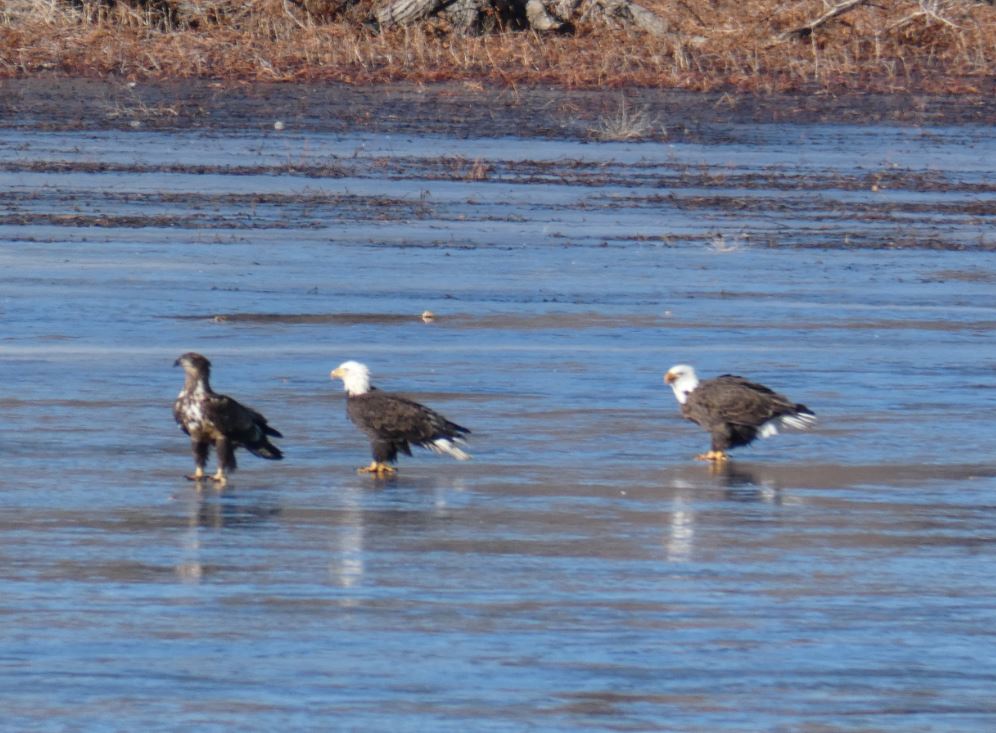 Eagles on the ice at Barr Lake State Park.

Now let’s revisit the fact that some breeding-age eagles migrate, while others do not. First, we have to distinguish between breeding-age eagles, and birds that are actually part of a breeding pair of eagles that will attempt to nest in a given year. The former are referred to as “floaters”, while latter are “breeders”. Floaters typically wander within the geographic region where they hatched, and migrate seasonally along the route they established when young. This wandering behavior is probably tied to a search for suitable nesting habitat, and of course, a mate. In fact, when a member of a nesting pair of eagles dies or otherwise fails to return to the nest, floaters have been known to move in quickly to take the place of the missing mate – sometimes within just a few days.

So, what about the latter group: the breeders? In some parts of their range, such as Colorado, breeders usually remain relatively close to their nesting territories throughout the year. In other regions, they will migrate with the seasons. This difference in behavior is based on the availability of food. In the northern reaches of the Bald Eagle’s range, prey becomes very scarce due to extreme cold, deep snow, and the lack of open water from which to catch fish. Interestingly, they won’t necessarily head south, but toward the closest reliable food source. For some, this may mean traveling west, or even northwest to reach the more temperate regions of the Pacific Northwest where they’ll find open water and salmon in large numbers during the fall run. 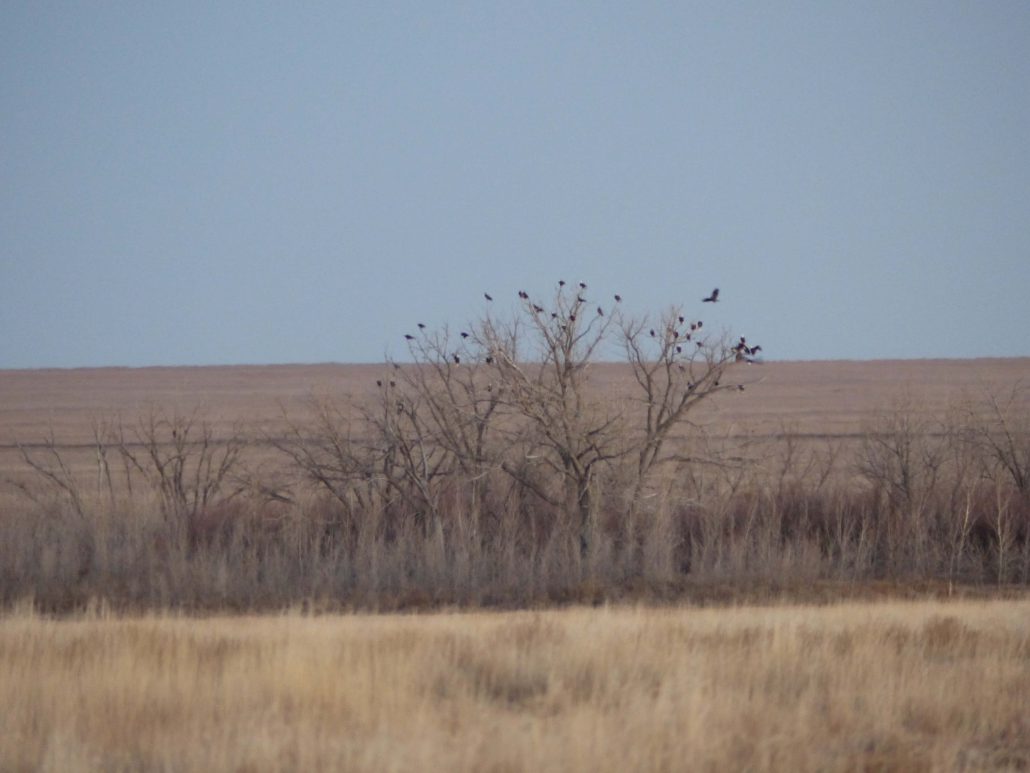 57 Bald Eagles were counted on this tree at Adobe Creek SWA!

The eagles that spend the winter in Colorado each year are likely from many different places, and have come here for a variety of reasons, as we’ve covered above. One thing they have in common, however, is that they are able to find food here in the winter. While many of Colorado’s lakes and reservoirs are covered with ice for part of the winter, they remain open later, and thaw earlier than where the eagles likely came from. Between the large numbers of migratory waterfowl, abundant cottontail rabbits, and prairie dogs, wintering eagles have a variety of prey to chose from. Though migration can provide many benefits to birds that undertake the journey, it is not without risk, and dangers that may be encountered during migration are both natural and man-made. Natural hazards include storms or other extreme weather, as well as the potential that the food source driving migration fails to materialize on the wintering grounds, among others. Man-made hazards come in many forms: collisions with wind turbine blades, electrocution from electricity generation and distribution, exposure to lead, and even direct persecution.

Many of these hazards can be minimized or mitigated with the cooperation of industry and enforcement of laws that protect eagles. Bald Eagles are protected by the Migratory Bird Treaty Act (MBTA) and the Bald and Golden Eagle Protection Act (BGEPA). Recent proposed changes to MBTA could put hundred of migratory species at greater risk. Eagles are fortunate in that they have an additional layer of protection through BGEPA, but most other migratory birds do not have additional legal protection. Ultimately, strong legislature  is  essential for the conservation and protection of North American migratory bird populations.

On a brighter note, it’s not too late to take advantage of excellent opportunities to view wintering Bald Eagles in Colorado, and there are few better places than Barr Lake State Park. On any given day from November to March, there may be as many as 100 Bald Eagles soaring above the lake, perching in the giant cottonwoods on the shoreline, or loafing on the ice. If you do visit, keep an eye out for the variety of plumage stages you’re likely to see, and think about what it might tell you about where that bird has been, and why it’s here.